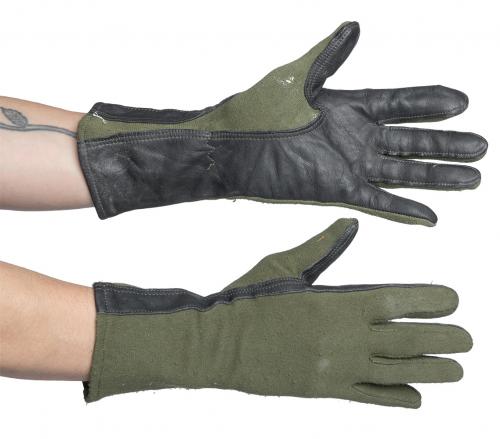 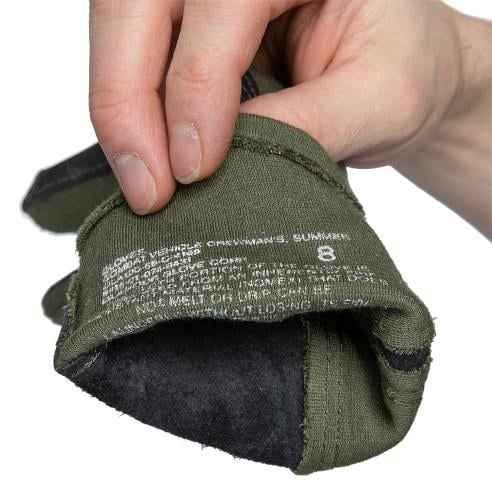 Unlined: form fit, but picking a size larger will give room for thin gloves worn underneath.
United States

Aviator gloves quickly found their way to decorate the hairy hands of the ground troops as well. These are specifically meant for vehicle drivers. An old but still very functional design. 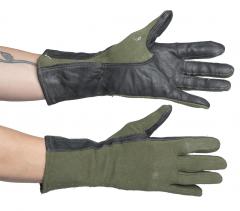 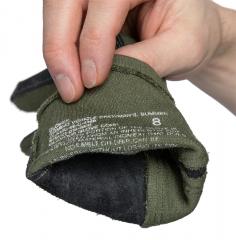 Aviator gloves quickly found their way to decorate the hairy hands of the ground troops as well. These are specifically meant for vehicle drivers. An old but still very functional design.

A carbon copy of this glove has also found its way to the use of German armed forces. Since the only difference is some text on the inside, we won't separate them from each batch. They are externally the same after all.

During the Vietnam war they came up with a pair of silly good aviator gloves with the grippier side made of leather and everything else of fire retardant Nomex. This meant the gloves did not melt on the pilot's hands if the plane caught fire. Needless to say, a pair of light, dextrous gloves weren't good only in the cockpit, so they were a coveted piece of gear among others as well. Naturally similar gloves were a bit later made for ground troops as well.

On the palm side these are made of leather from the wrist to the tip of each finger. The leather on the palm gives superb grip and dexterity. The back of the glove is made of fire resistant Nomex. Gloves are kept firmly in place by elastic straps on the wrists. Long cuffs offer protection from small cuts and scrapes.

Perfect stuff when good handling is needed. Working with small bits and pieces poses no problem (e.g. vehicle parts, guns, and such). However for demanding and continuously abrasive work use these are not meant for - everything is a compromise, these offer great dexterity and grip, but not the same kind of toughness that thickest work gloves give.

Sizes according to user's palm circumference in inches, as is usual with gloves. Measure yours like shown here. Easy size in the brackets.

Used but in serviceable condition. Being a military issue, they do have some wear to them. Might not be original pairs, but the same size anyway.

Compared to the German Bundeswehr leather/nomex combat gloves, these don't have the knuckle reinforcement but the leather itself is just a bit thicker.

Just as the desciption says, unreasonably comfortable, great for fiddly work, nomex back is a big plus but they wont last long in rough usage

These are by far and away the best driving gloves I've had since spending twice as much on a pair of OMP karting gloves back in the day. Fantastic for driving (duh) and really just about anything else. Not the thickest of course, but still very warm with the extra long cuff.
Don't believe the "Do Not Wash!" instructions, I soaked mine in a Dettol laundry wash for 30 mins then rinsed thoroughly, dabbed with kitchen towel and dried off in our boiler cupboard. The leather suffered a bit, but was quickly restored with some Aveeno handcream (non greasy and works into the leather very well).

Got the Bundeswehr equivalent of these. Minus half a star because the pair I received was quite well-worn. Very comfortable gloves, hard wearing and dexterous! Not to mention fire resistant!
0

Not sure if this is still true, but the leather used to be goat skin, very soft yet tough. I always wore them folded down, very long cuff on these. and these are not for cold weather. Great gloves, and they have pretty good stretch if your between sizes and want a close fit. Great for shooting gloves too.
0

Julius H. 08.12.2019 (Edited 06.06.2021)
Has anyone tried these (or the BW variant) for use in traditional archery? They're obviously not purpose-made for that, but seem like a good option for traditional bow hunting.
0