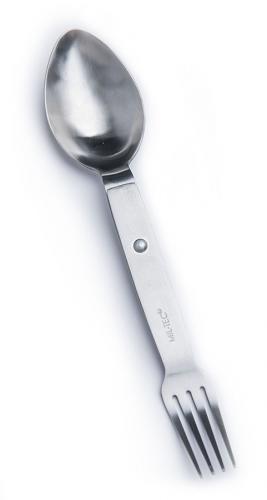 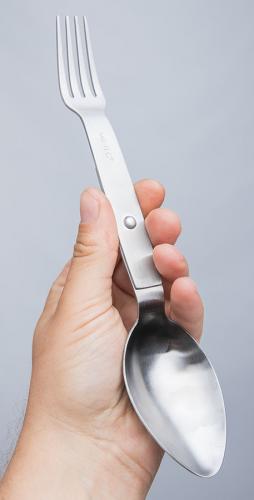 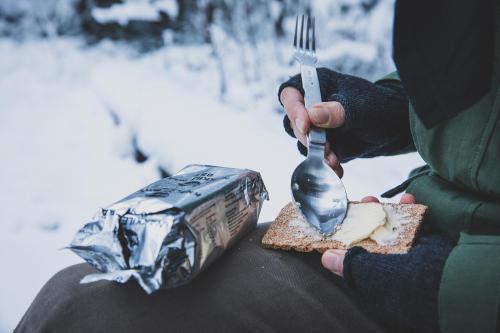 A foldable steel spoon-fork combination, this kind of "sporks" are still used today in the Finnish armed forces. Originally used in the Imperial German army, this kind of utensil has some history behind it.

Temporarily out of stock. Request restock notification and we will email as soon as this product is available.

A foldable steel spoon-fork combination, this kind of "sporks" are still used today in the Finnish armed forces. Originally used in the Imperial German army, this kind of utensil has some history behind it.

Swivel the thing open and you have a spoon on one end, a fork on the other and good handle for either one. Fold it and you've got a handy little package, easily and safely carried in your pocket. The main thing about steel spork is the fact that it will not break without tremendous effort.

Made of stainless steel. Weight about 80 grams. 23 cm long when opened, 15 cm when closed.

Oh, and it does wiggle a bit when folded open, and it will only get worse with time. This is an inherent feature with this design, our own army issue sporks do the same. It's like chopsticks; learn how to use it.

Let's face it: Mil-Tec isn't known for high quality stuff. However this spork is actually pretty damn good, and that's because it's simple and made of relatively thick steel. Won't break when you pound the block of icy porridge on a frosty morning. Try that with a plastic spork. Hell, even with the titanium one you'll probably have some doubts. I'll gladly forgive the 80 gram weight for the durability.

And the thing is CHEAP too.

Quality feels good, The spoon is deep enough, fork is ok also. But there's some wiggling and rattling when I fold it out. So some folks may find it quite annoying
2

This works very well. Some of the edges away from the working ends are a little too sharp, nothing that ten seconds with a file didn't fix.
All in all, a worthwhile piece of gear that resides in my stainless steel Swedish mess kit, and another one is in my aluminum Swedish mess kit too!
5

I prefer this to the aluminum version that used to be sold here. Much heavier, but it's a better quality stamping. Easier to clean, and the lock on mine is nice and tight when closed. Wiggles a bit when open, though. No sharp edges on mine.
3