There are many ways to field-test equipment. This time we're diving into less conventional means, which may appear completely out of line and reason to some. The operation wasn't exactly a great success, but we're glad no-one died out there.

On a cold February morning a group of warmed-up fighters left to tackle the demanding mission at hand. The clothing was mostly wool frieze and cotton, because modern materials are for the weak. (Kari had some Gore-Tex-Mex, but anyways). In addition to personal kit, the group was tasked to haul a large tent, tent stove, beer, Jaloviina brandy and Gambina all packed on a Lapp's sledge. When driving to the Nuuksio testing grounds in a Mercedes Benz Kampfwagen everyone but the driver had already had more than just a taste, so the start would be glorious.

After successfully parking the MB at Kattila school, maps were ditched because "you don't need these damn things" (nice thinking, Teemu). We unpacked the car, made ready, drank pre-march beers and took a group picture before departing.

The plan was to cover three klicks of easy trail to the waterside of a nearby lake, set up perimeter and exfiltrate in the morning. The chosen spot would have a woodshed to keep us alive during the night, because all we had was in terms of thermal control frieze uniforms, foot wraps, old blankets and booze. 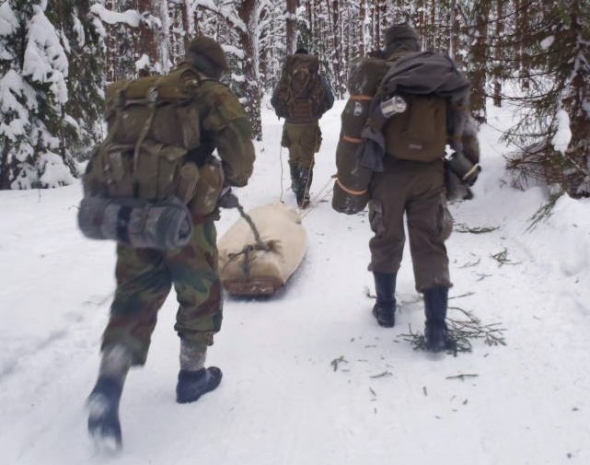 The sledge is wasted but frieze works

Let's say up front that the whole thing was a disaster FUBAR. The Lapp's sledge was made in the 40's with original ropes, of which the braking rope snapped right away. We were able to adapt to a different towing technique to keep moving but went a kilometre or two in the wrong direction. We knew nothing of the stray path as two members of the squad went to scout to find the shore and woodshed.

As the person tasked to guard the sledge I must say that frieze proved to be very functional: a separate thermal jacket was not needed even though I stopped moving, but it also breathed well during movement. People walking their dogs in the bushes did some double-takes when passing a group of drunks in old military uniforms on the side of the path. Well, we're used to this.

"You think the fucking Winter War was fought sober?!" -Teemu 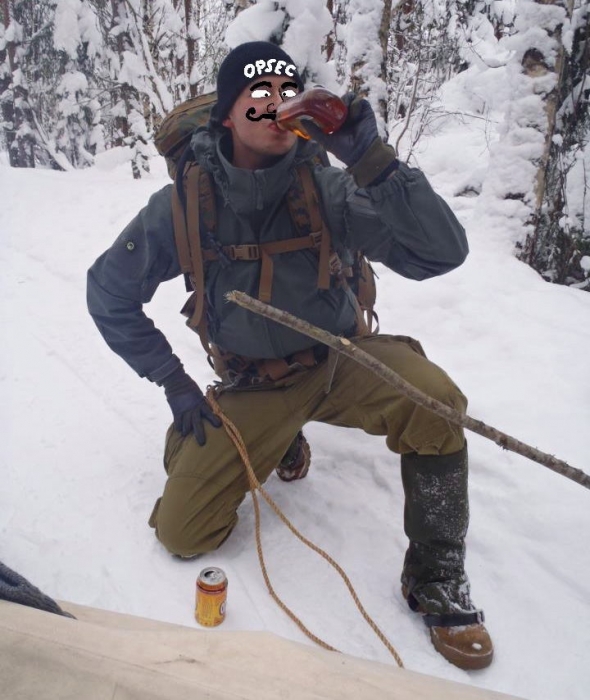 The way is entirely lost

Once our scouts returned and a careful pondering revealed that we should have made a turn way earlier. Well, turn the sledge around and head back. Because of all the junk and refreshing treats the damn thing weighed probably 60 kg (130 lbs for you Yanks) and was no fun to tow uphill, but thanks to incredible power-of-will we persevered. We thought we found the right intersection and wandered deeper into the forest to find our target.

After a couple of hours of straying we noted once again that we had failed. As darkness fell we decided to head back to square one and pitch the tent there before nightfall. There was another woodshed near Kattila school. The forest environment and beer raised troops morale while the sledge and snowy paths made sure we had good PE.

Our scouts Teemu and Aki promised to follow us to the school, but Teemu had already gone into survival mode (read: was passing out) and Aki had to cook some pea soup to awaken the hibernating fighter. The mission had already become much more than a three-kilometre easy hike, both physically and emotionally.

The sledge-pullers arrived orderly and started preparing the ground for the tent as the tails of greatcoats dangled in unison with snow shovels. Our drunken scouts pulled themselves from the snow and got lost on the way, but finally made it to the camp. Considering the amount of liquor everyone had consumed, the tent was erected surprisingly fast with good results.

Then it was time to chop some wood. Henri and Aki went to the shed to swing a huge axe found there - which was of the weight and quality that no-one would want to steal it - and carve firestarters with Aki's puukko-knife. As all safety precautions were forgotten at this point, a stray log hit Aki, which caused the knife to slip and cut his hand. "Ha ha ha, we're the toughest dudes!" we smirked and patched him up with some toilet paper and Panzerklebeband, which is German duct tape. Aki was concerned about his ability to play guitar, but it was a minor scratch after all. 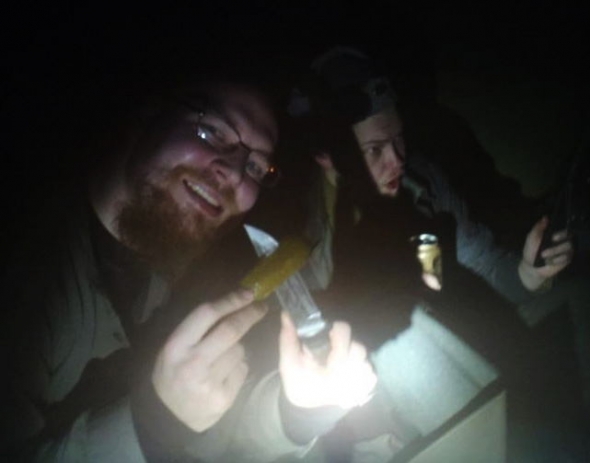 As the tent warmed up Teemu passed out again, only to wake up for an oral relief on the outside of the tent. "Use that russkie spade to clean it up, it's shitty enough." we told him, accompanied by hilarious laughter.

He did as told, got rid of the recycled pea soup and went back to sleep on his pad. But he's no ordinary person: soon afterwards he woke up to continue drinking! At this point our Gore-Tex hero Kari had presented a huge can of pickles, which he opened with such haste that half of them (which was really a lot) and all of the vinegar all around the tent. Have you ever smelled sweaty footwraps which are marinated with pickle vinegar? Yummy!

These were but minor setbacks for such high-class grunts as us, so we continued to tackel the most demanding part of the test: enjoy some pea-soup with spam and the favourite cocktail of all Finnish true gentlemen, Gambina.

Crashing at a wedding party and a night's success

After mandatory talks about getting laid we overheard something going on at the school. Henri and Aki donned their best clothes (frieze greatcoat, lantern and Gambina for Henri, Belgian Congo -fatiques and a South-African web kit for Aki) and went to check it out. As they approached the building, two (other) well-dressed gentlemen came to inform them that there's a wedding going on. Despite best efforts access was denied, so the scouts returned to the tent to enjoy better company in the warmth of the stove and the smell of pea-soup-fueled farts. 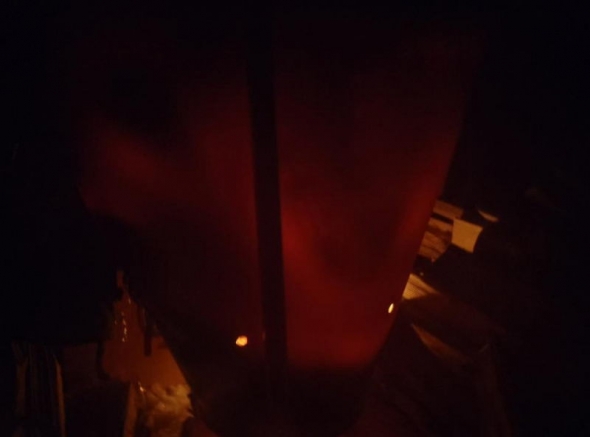 The night went on until Aki gave the signal, taking a leak on his side, that it's time for everyone to hit the sack. Apart from Kari sitting up to shout "WHORE!" in his sleep and Aki jumping up to hug the stove chimney, everything went relatively peacefully. In the morning we could observe three things:

We packed our shit, picked up the trash to leave no trace and headed back to base as the forenoon sun had come up to meet us or laugh at us, we don't know.

You really think we're going to write how NVA wool neck toque worked really well? Hell no. Let's just say that wool and frieze especially is still super. Use it. Just look at our photos and what we were wearing: all of it worked and no-one died, even though we weighed the dice against us by being completely smacked.

We also had Veshmeshok backpacks, various wool frieze items, foot wraps, puttees and such, and no gear-related problems at all, even though today's plastic world claims they are obsolete. Until next time! 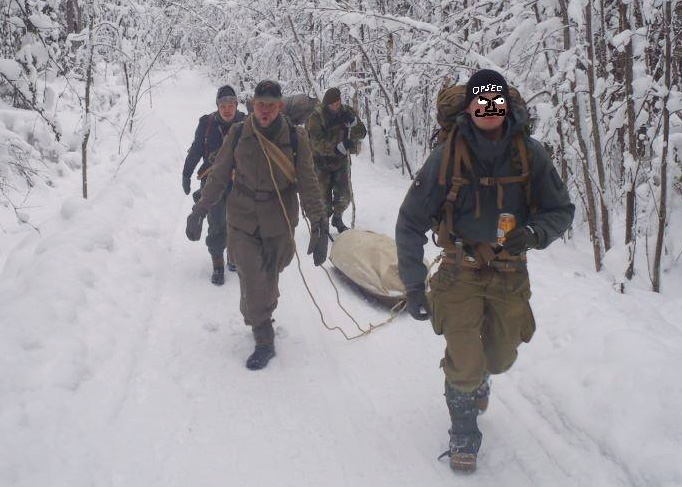 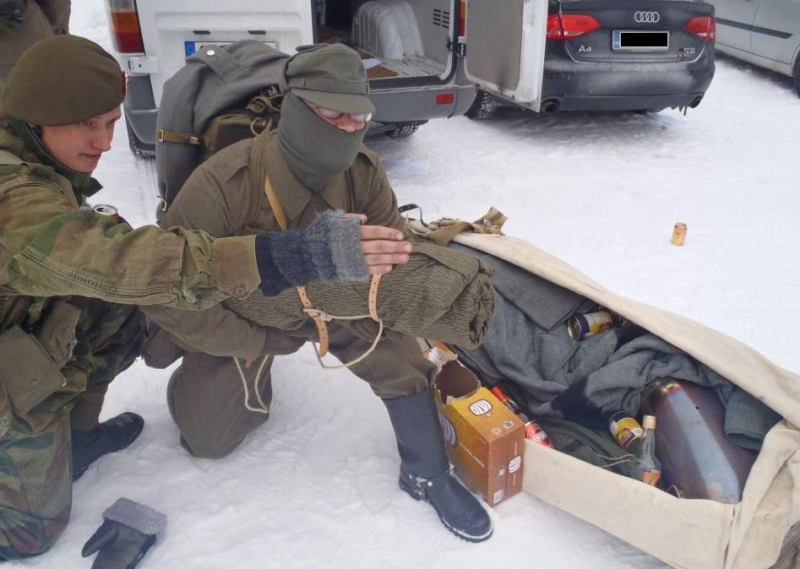 Pointing the direction for a fighter in German jackboots. Note the diligently packed sledge. No cans were left behind. 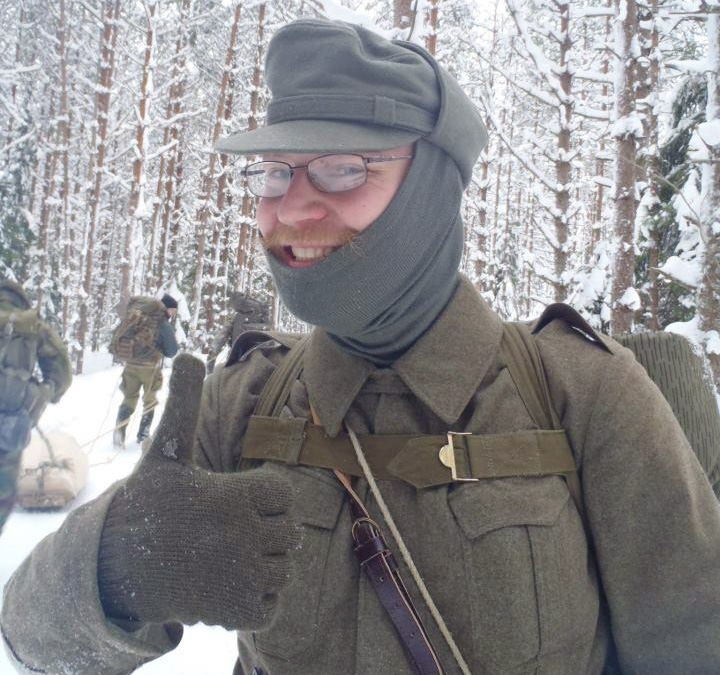 It's easy to smile after sleeping in a brandy-fumed tent. 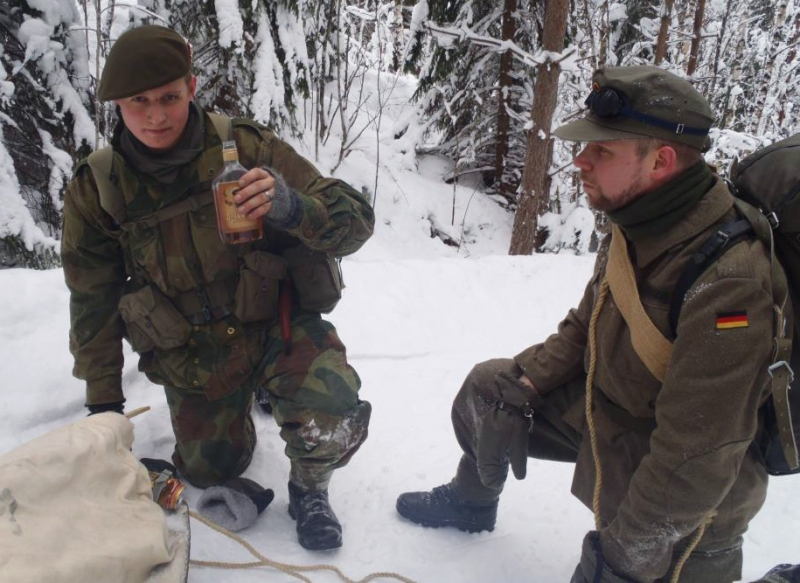 High-kneeling position with the 2nd lieutenant. Note the puttees, German frieze uniform and the Belgian camo fatigues, which saw action in Congo among other shitholes. 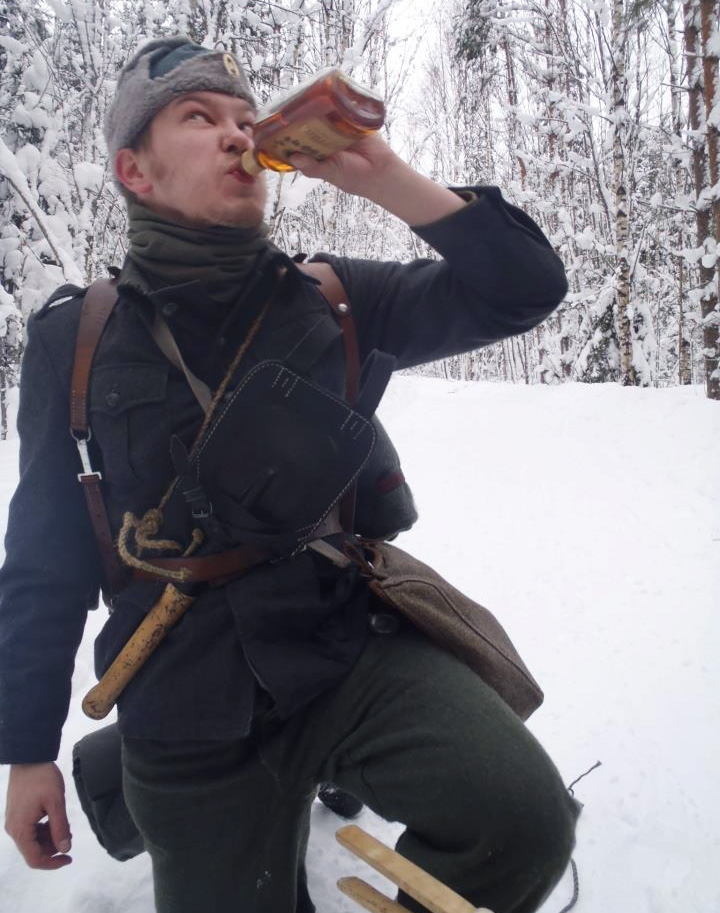 You don't see campers like this every day. Luckily? 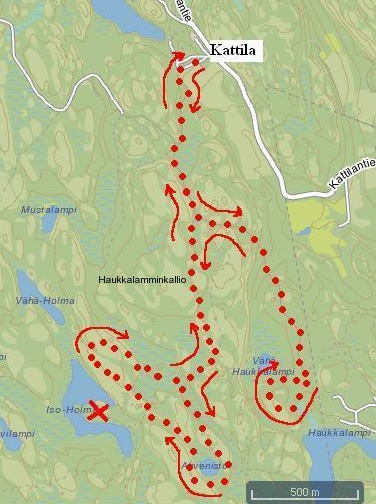 Estimated route. X marks the spot we were searching. 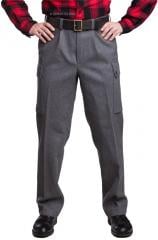 Finnish M65 Wool Trousers, Gray, Surplus
19.99 USD
Finnish army issue gray wool trousers with cargo pockets! Get yours now, this proper good stuff made in Finland of real wool. These are getting a bit rare. 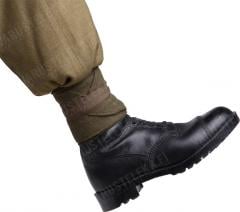 Australian puttees, surplus
9.99 USD
A real blast from the past! Wrapping puttees around your ankles really is a chore to put hair on your chest. The Australians were way ahead of their time during WW2, and used ankle puttees instead of the canvas anklets favoured by most Commonwealth countries. 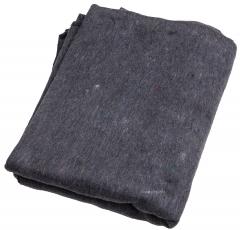 Bulgarian Blanket, 200 x 160 cm, Surplus
39.99 USD
If you want to boycott Poland, buy this Bulgarian blanket instead! These don't have a strong smell and are wonderfully plain in color as well. 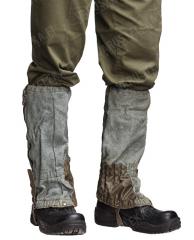 Swiss gaiters, grey, surplus
19.99 USD
Excellent gaiters for a friendly price - who the hell decided to get rid of these for this cheap!? Good ol' Swiss army surplus. 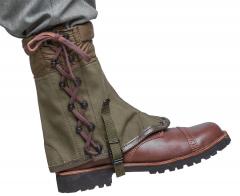 Italian gaiters, canvas, short, surplus
9.99 USD
Hats off to Italians for trying to keep the gentlemanly side of the war alive even in the '70s, as is evident from these gaiters that would have been right at home in the trenches of the Great War or at least in the Second Act. Cotton, steel, laces, straps, fiddly donning, these have it all, but there's a twist: the mouth of the shaft is made of nylon for that "modern" touch! The perfect accessory for your ankle boots. 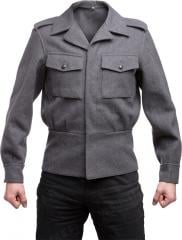 Finnish M65 wool jacket, surplus
19.99 USD
A Finnish classic, a short hemmed heavy-duty wool tunic with two chest pockets and nothing extra. Not too many of these left in the world anymore - get yours now! 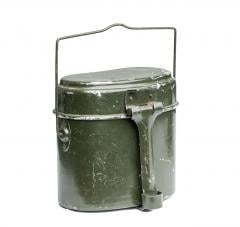 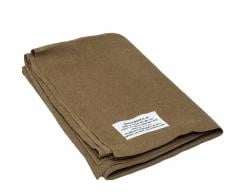 US WW2 Blanket, olive green, reproduction
34.99 USD
According to the supplier, this is a reproduction of a WWII US blanket. However, it looks more like a British surplus blanket with a US tag put on. Be it whichever, these are big and nicely priced blankets perfectly suited for civilian activities at home and in the wilderness. 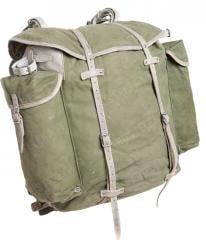 Norwegian Backpack with Steel Frame, Surplus
39.99 USD
The classic Norwegian army "Telemark" pack, a very basic military backpack with a steel frame. Simple, tough, and cheap, an excellent example of a proper army surplus kit! Affectionally is known as "Ludvig" by Norwegian troops, named after a character invented by Norwegian author Kjell Aukurust. Originally made by Bergans.
Webshop by Lillhonga.fi