Detective novelist at the perils of the Archipelago Sea

While preparing for another summer of writing on the Åland Islands, I went through my wardrobe to assemble some combinations suited for changeable weather. I have rented a small hut for writing purposes; the hut has no electricity, and it lies on the northern shore of Vårdö Island. The experiences of last season’s archipelago weather were in good memory.

The Åland Islands are a playing field for extreme weather. It might be hot and sunny for days, and you’ll be fine by wearing just one sock. Windy weather is usually served from the north, in portions of 20 knots or more. The wind picks up everything not tied down, like sunloungers, dragging them across the rocky shore all the way to the tree line. When it rains, wind usually blows, and the downpour is more of a sidepour, bringing with the neighbor’s sunloungers. The weather can change from sunny to stormy in an instant, so while outdoors, one must carry clothing for all weather scenarios.

But now, back to my wardrobe situation. I had to admit that my collection made no real sense. They were a mix of hunting clothes and sportswear from different eras. Some of them were way too large after I had lost a good 30 pounds of weight. Some had more or less disintegrated, or were of a style not suitable for any daylight outings. I even found a sweatshirt from my high school years, bought from Teneriffe. This 1980s classic had a Boss International print on it, in bright neon yellow. Although, due to the decades of use this sweatshirt had endured, technically it had a quite light carbon footprint. But perhaps it was time to let go. I had carried these impractical and ill-fitting rags to the island and back, without even using most of them. This could not go on anymore. I realized I needed professional help. I had to swallow my pride and ask for advice. I sent a call for help to the people at Varusteleka, and they promised to cook up a remedy for my ailments.

I immediately set out with a couple of boxes of my Hautalehto detective novels, for I didn’t want to show myself as a giftless writer.

The books were gladly received to be given to Bar Sotima patrons. After a cup of coffee, I explained to Varusteleka’s Jenny about my situation. I threw myself at her mercy. After fifteen minutes, I had a backpack sized clothing set in my possession – a Särmä merino wool T-shirt, a zippered Särmä merino wool shirt, and a set of Särmä Hardshell pants and a jacket.

I felt profound happiness for my new clothes, and really couldn’t contain myself. Jenny saw it, and asked me to get back to her after the summer about how the combination fared in the Archipelago Sea weather. Good or bad, I was asked to give a straight review. And here we are.

I’d done some reading on merino wool clothes, and I was eager to give them a try at Åland. And in some perverse way, I hoped for the early summer to have really wet weather. And this was to be the case.

My days on the island are mainly spent writing the book, which I do when fishing, hunting, hiking or rubber boating around the islands doesn’t get in the way. Usually they do. So there were going to be good opportunities for gear tests.

Soon I discovered how damn foolish I had been cheaping out on proper clothes. Never have I worn a more comfortable base layer than the merino wool T-shirt. The soft material caressed my physique – that of a French lover – and really enveloped my muscular upper body, with no unpleasant tightness or such. Paradoxically, this shirt proved to be warm when the weather was not, and it kept me cool when it was warm outside. 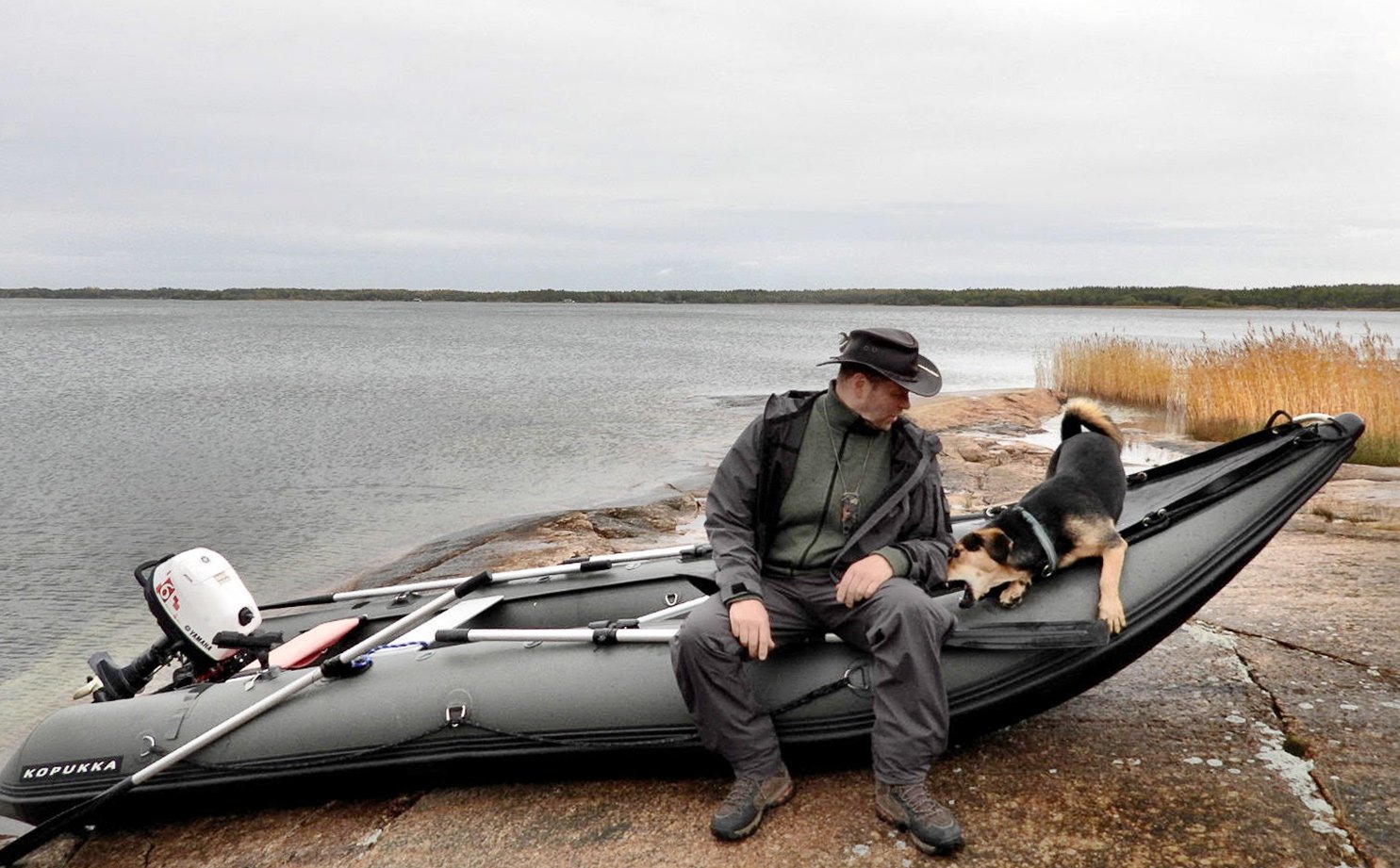 It is hard to come up with a better all around piece of clothing than a zippered merino wool shirt, as far as archipelago weather is concerned. The shirt has proper long sleeves and a high collar to fight off any draft or breeze. What makes this the king of shirts, is the zipper – open it to cool yourself down when the sun is ablaze, or during physical exertion. Contrary to popular belief, writers also sweat. I myself am a sweating pig, whose personal thermometer goes on red the moment I set foot on an incline – therefore I have been most grateful to Gideon Sundbäck (inventor of the modern, reliable zipper) and the design team at Varusteleka for this garment, for really minimizing the amount of sweat droplets produced while on the move. This shirt has proved to be comfortable and versatile, I basically wear it everywhere and everyday. While you could, I don’t recommend sleeping in it. I took an impromptu nap on the warm (but coarse) rocks and managed to get some chafing on the back. This was a user error, not a defect. 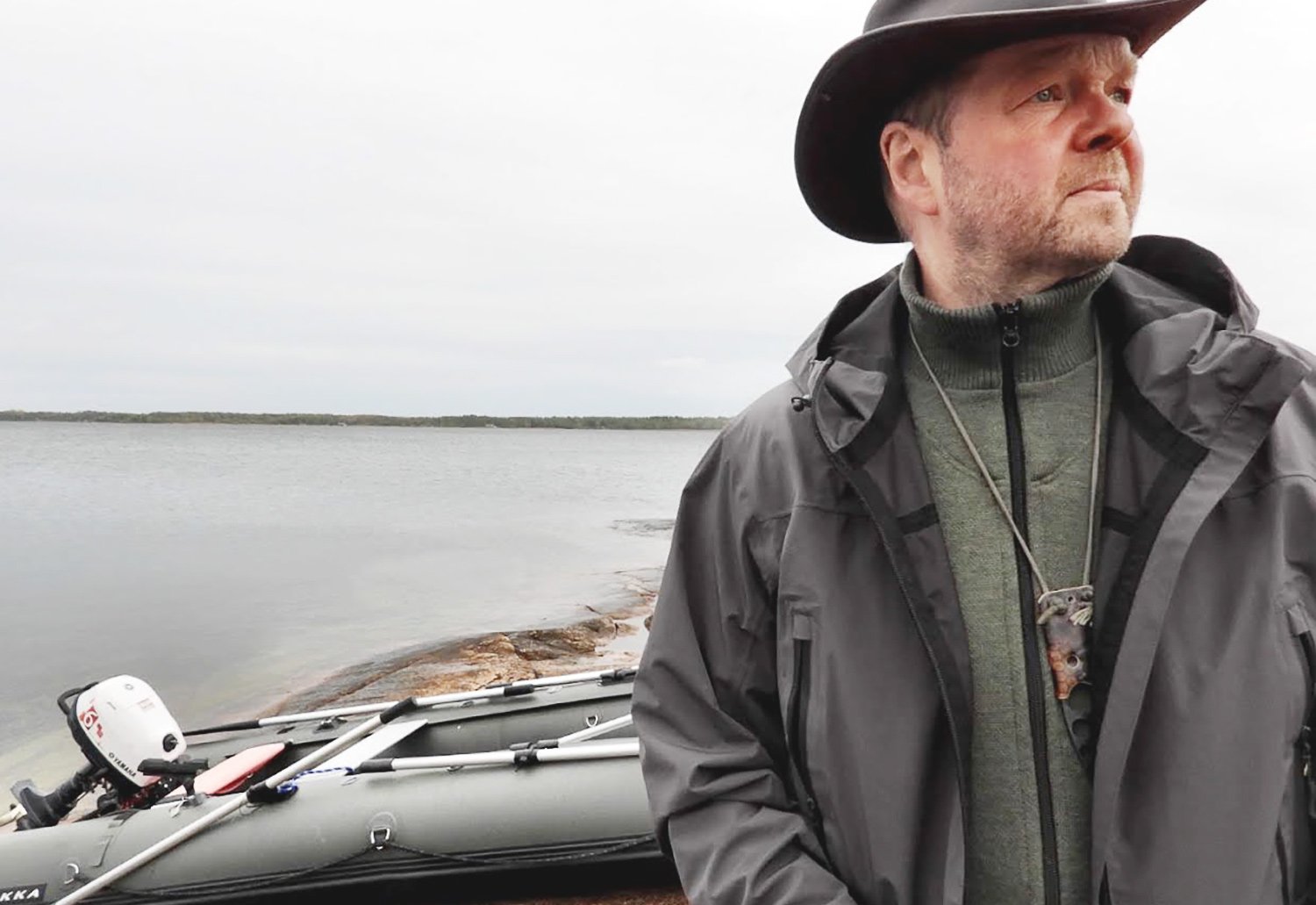 The Särmä Hardshell pants and jackets saw action immediately when I arrived at Vårdö Island. My wife Heli and I had found magical perch waters the previous autumn, just a brief walk from the hut. To get there we didn’t need to pump up the deflated rubber boat, instead we just took off on foot. We could almost taste the juicy perch fillets in our mouths, so we weren’t discouraged by the rainy weather report. We just put on our Hardshells and went forth with our fishing gear. The rain came upon us quite soon, and the wind picked up. Although I am a hardened adventurer and a sucker for fresh perch fried in butter, I’ll admit that I would have turned back, had I been wearing the previous summer’s kit on myself. Luckily our rain gear was on point, plus we really wanted to put them to the test. Some might ask, why luckily, but all this has a clear causal connection. It is because the perch of Åland, the biggest ones, don’t care if it’s sunny or rainy, they swim in deep waters and are always wet.

After we got to the shore and a good fifteen minutes of fishing, we had our fish to fry. Regardless of the rain, we felt quite okay-plus with our Hardshells, and we carried on with pulling fish from the sea until the last one of the day was caught. A two pound perch. After it, our quota was more than met, and we returned to the hut. 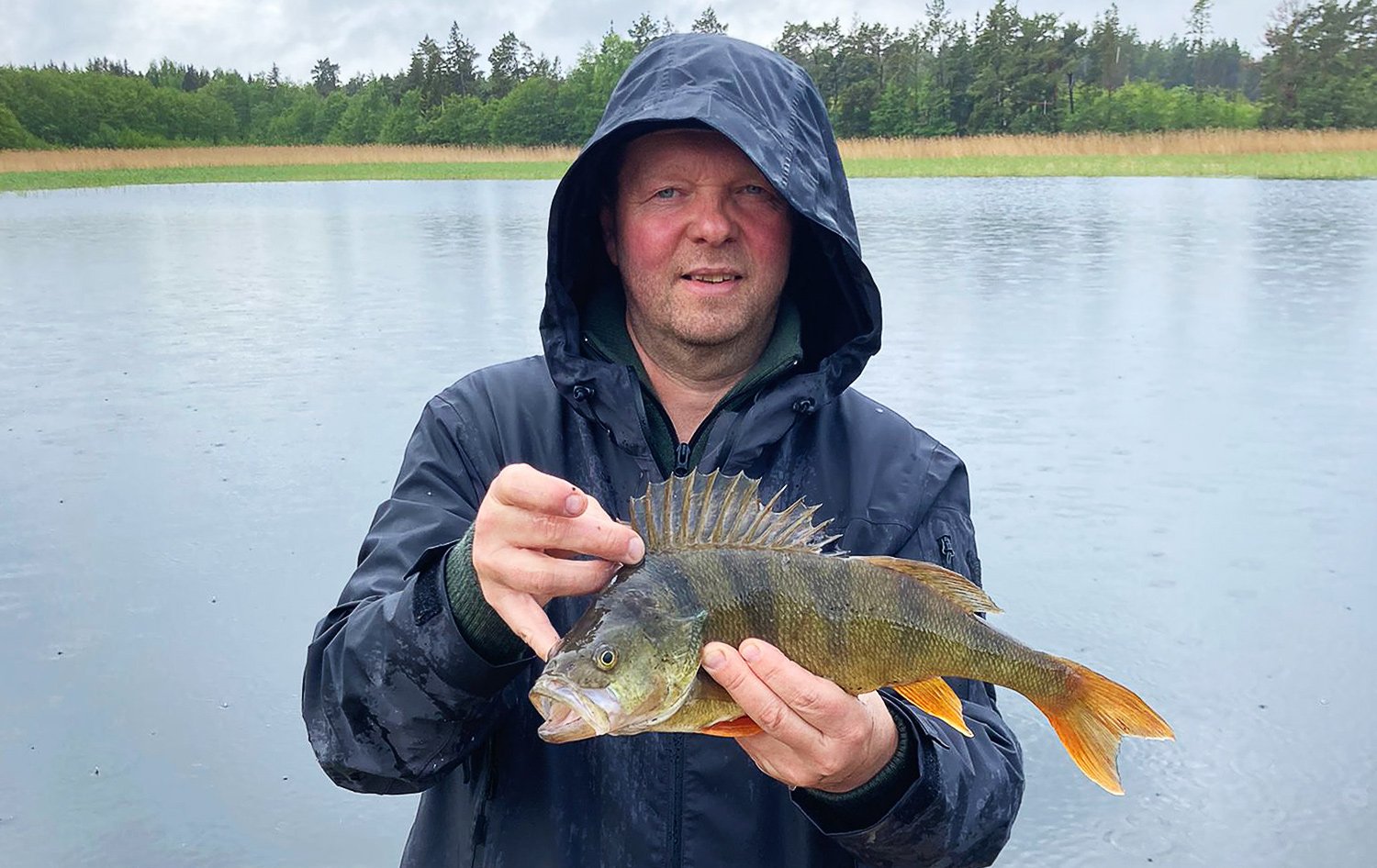 The Results are in

But, enough with boasting, and back to the gear. Waterproof, quickly donned pants and a jacket are basically mandatory when doing outdoor things at the archipelago. During boat trips they shield you from the wind, and you can adjust your temperature by opening the pants’ side-zippers while on the move, which is great. The air is circulated, but the tall, wet grass won’t be a problem. I would’ve needed belt loops though, I’m not a suspenders guy. Other than that, I’ve yet to find any negative aspects about these – the Hardshells are always either on me or in my backpack. The waterproof membrane works well, I have not had to postpone any dog walks for the rain. They are not the prettiest pants in the world, but that won’t matter when it rains.

The Hardshell jacket is the king of autumn weather; it is light and even looks decent enough. During mask mandates in Kerava, it didn’t matter what you wore, because no one would recognize you, but nowadays, again, you have to mind what you wear. You can put the Hardshell on top of your blazer and go to a meeting, if there’s bad weather. No one will bat an eye. I myself am not a friend of umbrellas – or their users for that matter – I get quite miffed about people running into eachother with their heads under their umbrellas and eyes fixed on their phones. I rather put a raincoat on and stay out of other people’s faces.

The Hardshell jacket zippers are quite stiff, which requires some getting used to. I might have needed a two-way zipper, which gives additional adjustment range for heat dissipation (see about the sweating pig part). But I guess that might be too complex a thing, given the requirements for being waterproof. There was some learning to be done about the pocket placement, but that was resolved soon enough. The pockets have been designed for carrying a backpack and still have access to them. One disappointing thing was the absence of a hanging loop. But then my wife corrected me and showed where it was, under the hood, in the back of the neck. I was no longer disappointed.

As a whole, I have to give the Hardshells an excellent grade. They are light, they take little room when packed, and are waterproof. They also have a decent look, so I can wear them everywhere from the sea to the fells, and even city streets. The Hardshells work from deer hunts to board meetings. This past summer has made me a believer in proper outdoor gear. They really take the misery out of adventure – if there is such a thing!

Detective novelist Christian Rönnbacka is an adventurer who owns a shooting range. He has founded the Author’s Distillery, which makes award-winning gin and domestic rum. He is best known for his ten book series of Hautalehto detective novels. The fourth book will be made for TV, the series premieres mid-December 2022.

Rönnbacka enjoys hiking and prospecting for gold in Lapland. Together with Lars Candolin, he has found a motor boat route from Tammisaari to Pietarsaari via Hämeenlinna, and wrote a book called Riskiretki about it. He has published non-fiction books also about ghost hunting, insurance fraud, and Finnish whisky. He is currently working on a 15th anniversary book on Radio Rock, a Finnish radio station, due 2023. When Rönnbacka isn’t writing, he probably has a fishing rod or an AR-15 in his hands.