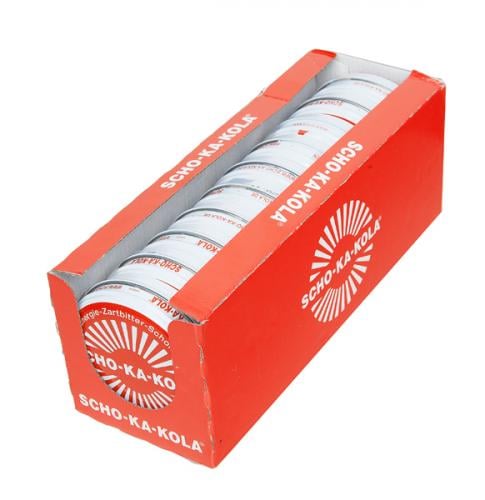 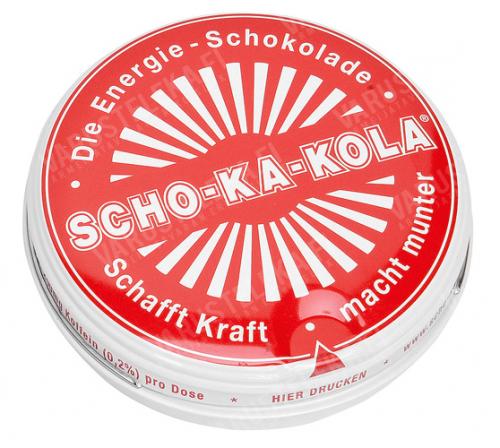 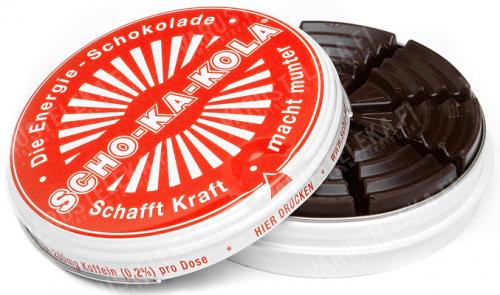 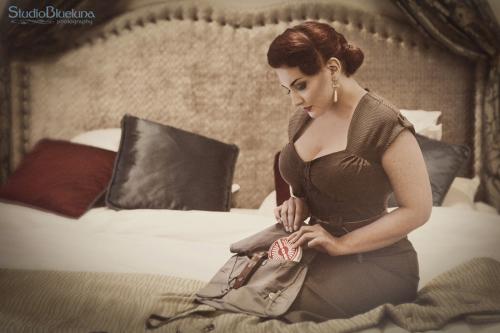 This stuff in identically-shaped tins has kept the Germans awake since the 30's. Scho-Ka-Kola is chocolate with lots of caffeine, essentially a mild combat drug!

This stuff in identically-shaped tins has kept the Germans awake since the 30's. Scho-Ka-Kola is chocolate with lots of caffeine, essentially a mild combat drug!

Note: the cardboard box may or may not be included. It all depends on the position of the stars and the moon and what else.

Dark, bitter and strong chocolate. During WW2, Scho-Ka-Kola was a part of the aviator iron ration, and was widely issued alongside normal food distribution to the army. One can find mentions in contemporary soldiers' diaries of how they would despair at being issued Scho-Ka-Kola, since it invariably meant impending trouble. If you are expecting some kind of easter egg milk chocolate, this is not for you!


Some numbers and facts:

4 pieces of Scho-Ka-Kola contain about as much caffeine as a strong espresso. Use with discretion. Really.

Great if your in stag (sentry) and need to stay awake. Also if you need fast energy on the hills. I couple this with cliff bars as a way to get "oh my god I'm going to collapse" energy. Safe to say, got me out a few silky situations
24

Superb chocolate. I love coffee flavoured chocolate to begin with, but I love this even more because it is not too sweet but just sweet enough. Does the trick when you need a boost.
29

Ordered about a week and a half ago and it just got here. It is everything I hoped it to be. It tastes like black coffee, with a shot of mocha, condensed into a piece of chocolate. In pie-like pieces it keeps you from eating too much all at once and getting a caffeine buzz and a headache. Perfect for marches and hikes when you need calories and energy.
14

You have to try this stuff. Good, strong taste and a nice caffeine kick. The WW2 history makes it even more tasty. The metal box is good for storing your bore snake, or for target practice with your airgun or .22LR. Well, why not .308 actually. Could be cheaper but still I come back for more. Don't let your kids get their hands on these, they will go crazy within a few minutes.
17

My retarded girlfriend ate like 8 of these in a sitting and we almost have to go to the hospital. 11/10 would blitzkrieg again.
144

Excellent dark chocolate. Great pick-me-up at the end of the day. Tin is handy for keeping in pack or glove box. Will be ordering more to share with friends and family!
11

+1 Awareness and dexterity when consumed.
50