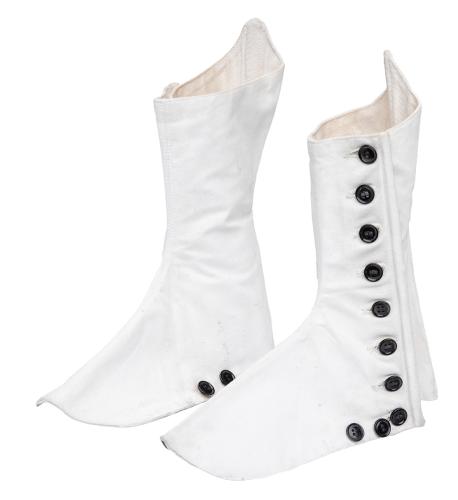 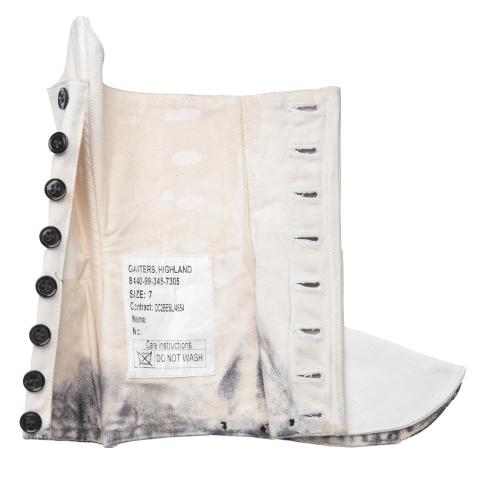 Now, we finally got some classy stuff. These are Highland gaiters, together with the kilt part of the parade uniform of e.g. the Royal Regiment of Scotland. Also pretty spectacular for folks who are into the 18th and 19th-century reenactment and steam punk stuff. Or get a top hat, red coat, no pants, and these, and go swimming in your money bin. A very limited batch, so act very fast. 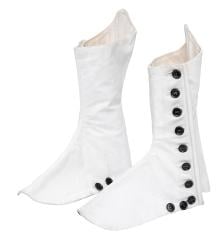 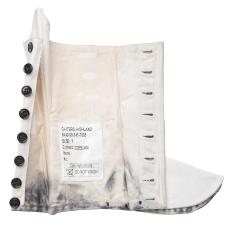 Now, we finally got some classy stuff. These are Highland gaiters, together with the kilt part of the parade uniform of e.g. the Royal Regiment of Scotland. Also pretty spectacular for folks who are into the 18th and 19th-century reenactment and steam punk stuff. Or get a top hat, red coat, no pants, and these, and go swimming in your money bin. A very limited batch, so act very fast.

These are white cotton gaiters that have a black button closure. They rise to around mid-calf depending on how tall you are. Technically, these should be called either half-gaiters or spats, but the manufacturer has named these gaiters, so we go with that. Originally these also featured a strap that goes under the foot, but it is not included. The buttons where it is supposed to be attached to are there though. So, the strap is an easy fix.

These are made from very tough cotton canvas that has some sort of treatment to make them more water-resistant. The washing instruction is pretty straightforward. Don’t.

People have protected their lower legs from the elements for a very long time. At least already in the Iron Age, you had leg wraps made from wool. In the 18th-century soldiers started using separate linen or cotton gaiters to protect their socks. And just like all the other cool military chic things, the fashion spread to the civilian world. At first, the gaiters covered the whole shin, but in the 1770s they were often shortened to the mid-calf length for practical reasons. Nowadays flashy gaiters are more of a parade uniform thing, and for protective purposes, Gore-Tex is the stuff.

So, what use do these cotton gaiters have, might some people wonder? These are pretty awesome for 18th and 19th-century reenactors. The plastic buttons are easy to replace with something more period correct. These are of course also quite splendid for vintage dandies.

These are in the British shoe size system. However, keep in mind that these are meant to be used with a kilt, low shoes, and slender soldier calves. In other words, they are very slim fit. Therefore you won’t fit boots or thick pants underneath. And since they are supposed to sit very snugly on the soldiers, you won’t fit these on thick calves either. The buttons can be removed and sewn on a bit further, which gives you a bit more space. Don't try to get more space by switching to a bigger size. That will move the gaiter higher on the calf, which is also thicker.

Used but not horribly abused. These aren’t pure white anymore, especially not on the inside, because they have been used with well-polished black boots. The strap that goes under the foot is most likely missing since it is a separate piece, but that is an easy fix.