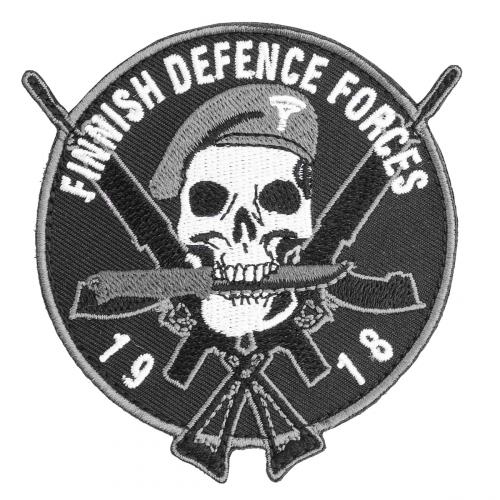 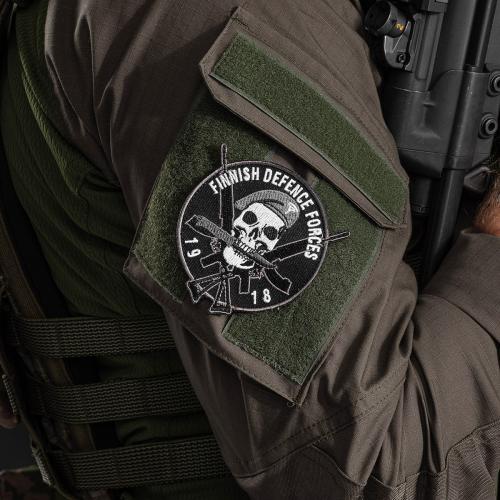 A morale patch with a badass Finnish Defence Forces skull print. This is especially for the eager jaegers who wanted it to suck more and hoped it would never end. The world needs more proper no-bullshit macho bullshit. Here you go! 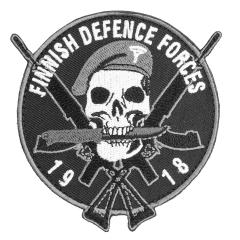 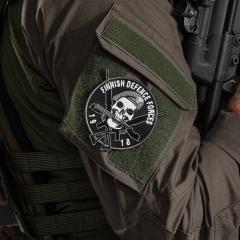 A morale patch with a badass Finnish Defence Forces skull print. This is especially for the eager jaegers who wanted it to suck more and hoped it would never end. The world needs more proper no-bullshit macho bullshit. Here you go!

Wearing this patch without having served in the FDF should not be considered "Stolen Valor". The patch is intended to show support, can be worn by anyone, and does not necessarily mean you have served.

Mandatory military service touches virtually every Finnish person. From a population of 5.5 million, 22,000 conscripts are trained annually. The FDF has a war-time strength of 280,000 and a reserve of 900,000 fighters. A man or woman in uniform doesn't draw attention on the street: everybody knows people who served, quite often by a close relation.

As you may guess, it's a mundane thing for us and it's common to count the days to the end of your service. The end of active service, however, is the beginning of being a reservist.

These are manufactured by patchmakers who also make the official rank insignia and unit and branch patches for the Finnish army. Quality stuff!

I'm proud of having served in our armed forces. What has always bugged me is that the only available means to signal it is some kind of "It's over!" kind of sticker or shirt. I think those are pretty lame so I wanted to design a patch that fixes the situation with style and a hint of Americana!

James B. 14.10.2021
The design of this patch does, indeed, look like it has come from an '80s SOF magazine. That's a compliment, by the way, 'coz it was the era when we, the good guys, had moustaches and used to win wars for the benefit of humanity. The print magazine is also sadly missed.
It's similar to Mikko's t-shirt design, except the screaming skull's beret now has a Leka badge, rather than Suomen leijona, and the terävä is now a puukko.