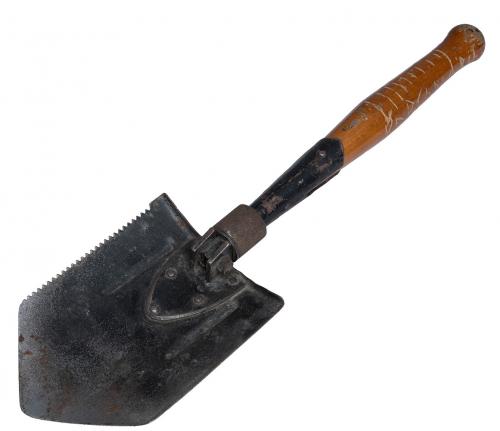 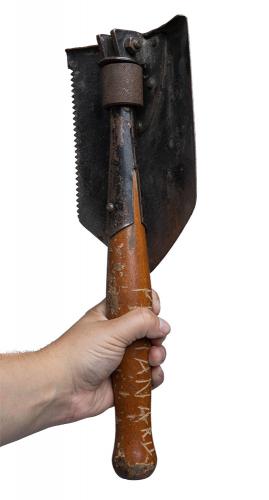 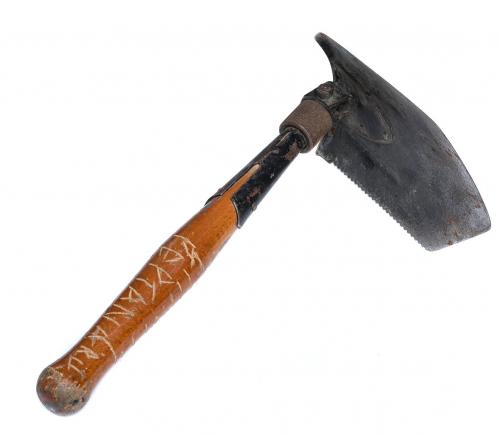 In the beginning, there was a swamp, a German folding spade, and Günther. Germans developed a good folding spade for WWII, and it was such a brilliant invention that it was copied here and there. Here’s the Romanian vision of the same thing. For hikers, hunters, and bushcrafters who make their own paths. 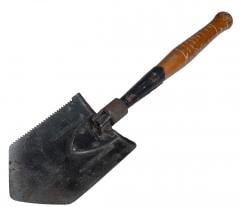 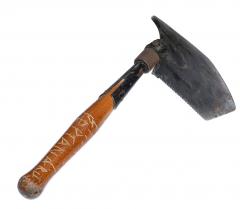 In the beginning, there was a swamp, a German folding spade, and Günther. Germans developed a good folding spade for WWII, and it was such a brilliant invention that it was copied here and there. Here’s the Romanian vision of the same thing. For hikers, hunters, and bushcrafters who make their own paths.

As mentioned, you can fold this damn thing using the heavy-duty metal screw. Fold it fully for transportation, or turn it into a spade or hoe. The handle is made of good ol’ tough wood and the end is a rounded nob. One edge is serrated, so you can use it to saw through roots and murder the enemies of the state quite nicely.

This is used army surplus, so you can bet your ass that these have dug a helluva lot of trenches. So, they come with scratches, dents, surface rust, and the handle has all sorts of hieroglyphs by frustrated soldiers. However, since these were made in the days of yore when things were still made to last, they will dig tons of dirt in the years to come. And if you are not that fond of rust, it can be removed!

Product was in used but good shape, except for one critical thing!
The "screw"-part are too damaged to actually hold it tight, so im most likely gonna have to weld it solid to be able to actually use it.
2

I use this in the garden, the blade is sharp enough to chop roots and the saw for branches. The screw is a bit finicky and sometimes does not latch to the threads on the first try. Otherwise it is in great shape, the rust is not so bad. At some point I will have to apply more varnish to the handle though.
1

Used but servicable condition. Mine had a lot of wear including, but not limited to, a bent tip and worn serration but nothing a few minutes with a sledge and a file wont fix. Mostly got it for the straight wooden handle because I think that's pretty.
0