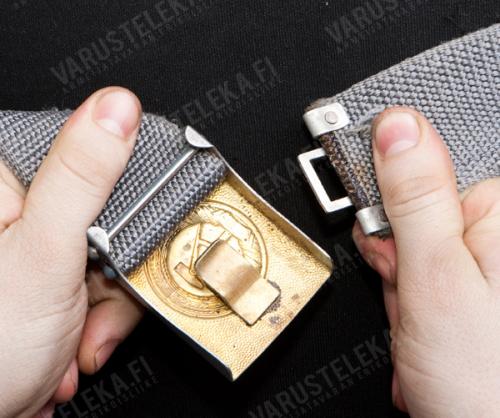 East German grey field uniform belts with a grey-painted metal buckle. This is technically a combat belt, but it can be used equally well as a trouser belt. It is freely adjustable and 45 mm / 1.7" wide. 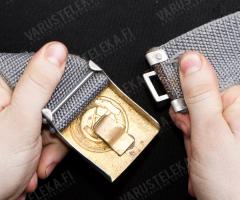 East German grey field uniform belts with a grey-painted metal buckle. This is technically a combat belt, but it can be used equally well as a trouser belt. It is freely adjustable and 45 mm / 1.7" wide.

Strongly in the spirit of World War 2, the East German NVA based their combat webbing on the traditional system consisting of a belt and Y-straps. However, because we are talking about East Germany after all, they made it all from slippery nylon-like Dederon, making the usual "disintegration-when-donned" and "sailing pouch" problems of the WW2 kit even worse.

In conclusion: while the kit was quite tough, it was still a piece of shit. If you want to experience it, we occasionally have the components on sale.

Our sales pitch is that these are actually pretty good trouser belts. The buckle won't open on its own and the adjustments seem to hold well.

Most of these are unissued, some are used, some might be a bit dirty after decades of loving storage.

Super cool and practical. Can't say much else, other than "works as intended"!
4

I own two and they're both the same. The hole side of the buckle has a right correct side and a wrong side and it will sit on an awkward angle if it's clasped to the buckle the wrong way.

If you can't get your buckle to sit flat, try taking the belt off of it and reversing it.
1

My belt came with just a tad of corrosion on it. However, there is no impact made on the belt's usefulness, and I look forward to using it plenty!
0

It's grey, and made of nylon. I can hang my binocular pouch, muti- tool pouch, skinning knife and ammo pouch from it. Nothing more to say, really.
0

Best belt I had bought, CANADIAN MILITARY APPROVES OF MY BELT I use it for school and the belt has never stabbed me
1

Ideal belt for jeans, which one probably couldn't buy in the DDR to go with it. I have two of these belts, and they'll last longer than me (and the DDR).
1