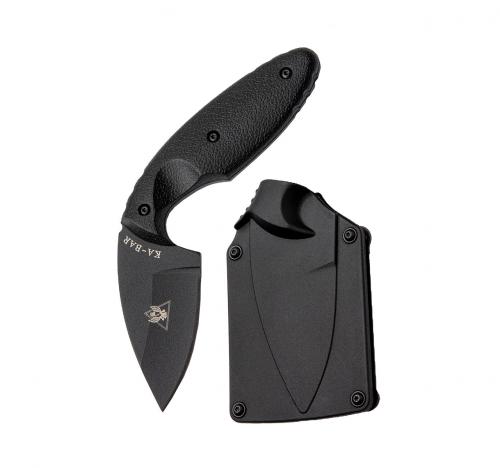 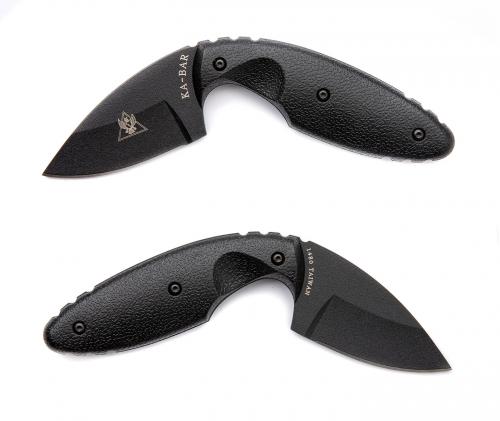 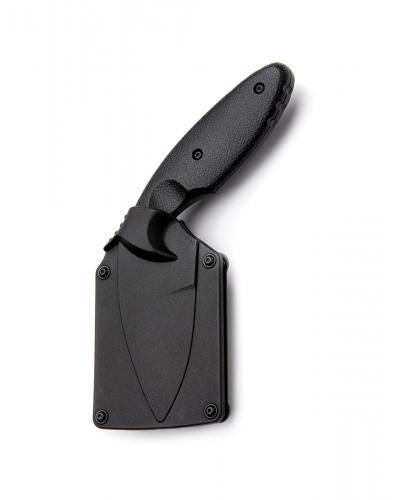 Because of the handle design, the knife is drawn like a pistol. 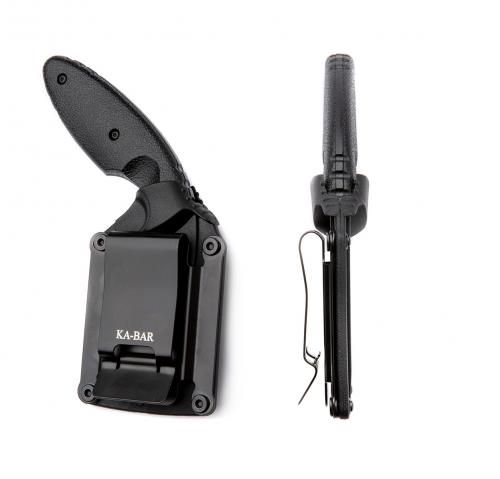 A sheath with a belt clip is included. It is set up to be carried on the left side but can easily be changed to a right-side carry. 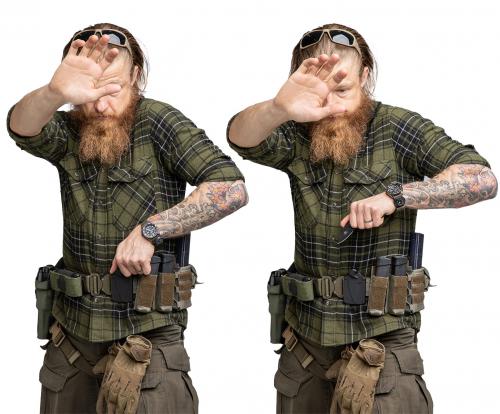 The knife is originally designed for preventing sidearm snatching but also works in other tactical use. 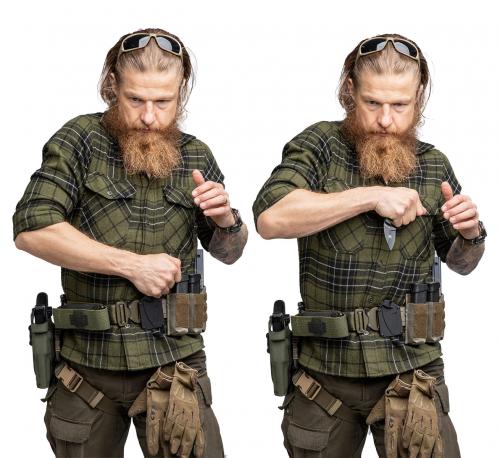 You can also access the knife with a cross draw. 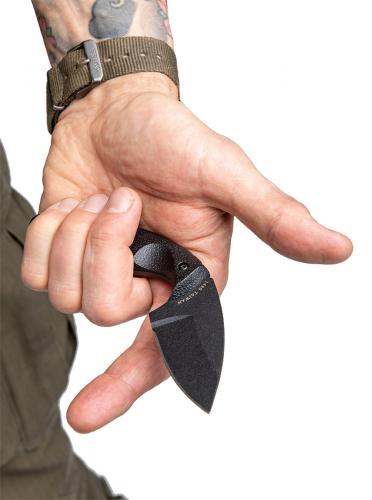 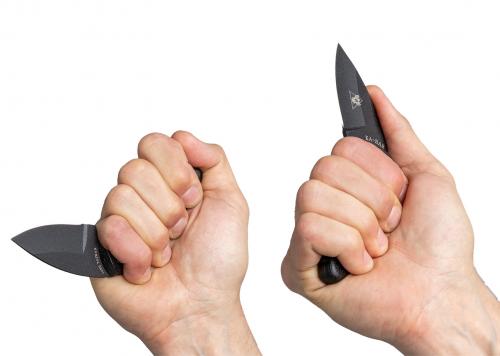 You can use this knife in both normal and reverse grip.
Ka-Bar

An ideal backup weapon for law enforcement officers and military, meant to be carried on the non-dominant side. Easily concealable, super lightweight, and very fast to deploy. Originally designed for defending against sidearm-snatching bad guys but works in other tactical use as well. The knife is drawn from the sheath like a pistol from a holster. 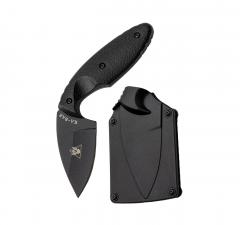 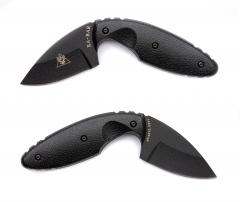 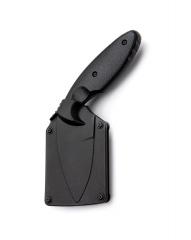 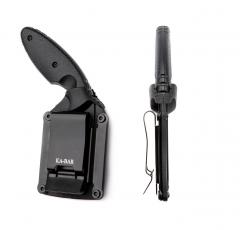 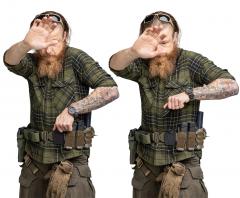 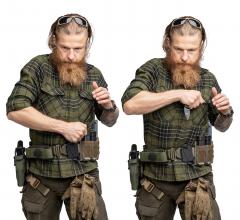 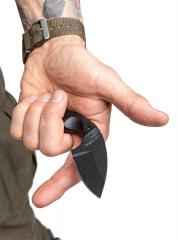 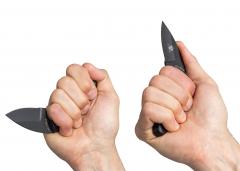 An ideal backup weapon for law enforcement officers and military, meant to be carried on the non-dominant side. Easily concealable, super lightweight, and very fast to deploy. Originally designed for defending against sidearm-snatching bad guys but works in other tactical use as well. The knife is drawn from the sheath like a pistol from a holster.

This knife was designed by John Benner, the founder and owner of Tactical Defense Institute (TDI), hence the name. This is the original TDI knife that got so popular that a whole series was created around it. This knife has a black coated blade, handle, sheath, and metal belt clip.

This ergonomically shaped knife is designed to be the law enforcement officer’s and soldier's backup weapon in close quarters. Such cases occur, for instance, when someone is attempting to grab your handgun from the holster and you are prevented from accessing it. The Ka-Bar TDI knife is available on the opposite side as the "last resort.

The knife is worn on the non-dominant side, a bit forward and center. The curved fixed-blade knife is drawn like a pistol. So, you can deploy it a lot faster than a folder. You can also cross-draw it with your dominant hand if needed. The other benefit of the curved design is that you can sit, bend over, and do things comfortably and naturally without being bothered by the knife.

This super lightweight knife works in both regular and in a reverse grip. AUS 8 is fairly easy to sharpen for being stainless steel. Made in Taiwan.

The sheath is designed for the US police officer’s pant belt, which is apparently 41 mm (1 ?”) wide. However, it will fit up to 45 mm wide belts. We tried it with various types of belts. In addition to more tactical ones, it also works on the Särmä Leather Belt. Since the sheath isn’t fastened with any kind of a locking mechanism, the belt should be fairly thick, otherwise you will pull the sheath out when trying to draw the knife.

The knife and sheath unit is designed to be worn on the opposite side of your firearm. So, the right-handed folks wear it on the left side. The sheath is set up at the factory to be mounted on the left side.

If you are left-handed or otherwise want the knife on the right side, you can easily remount it. Remove the four screws from the front of the sheath using the enclosed Torx #6 wrench. Detach the metal belt clip keeping the rubber grommets and fasteners attached to the clip. Place the clip on the reverse side of the sheath. Align fasteners to sheath and tighten the screws. Tadaa, done!

KA-BAR Knives, Inc. is an internationally recognized cutlery company located in Olean, New York. They manufacture the world-famous KA-BAR USMC Fighting/Utility Knives, as well as a multitude of other high-quality knives for law enforcement, outdoors people, hunters, and collectors. Originally they used to be called Union Cutlery Co, but when their Ka-Bar brand became more well known than the company itself, they wisely changed their name.