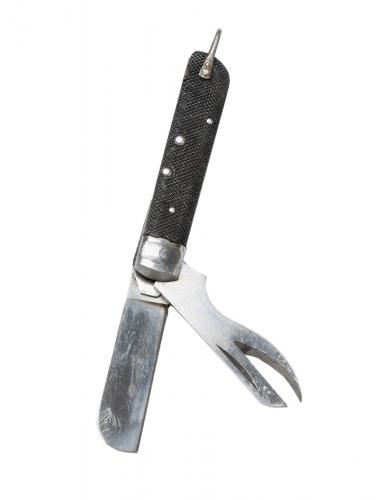 A really cool old-time friction folder with a wicked can opener. 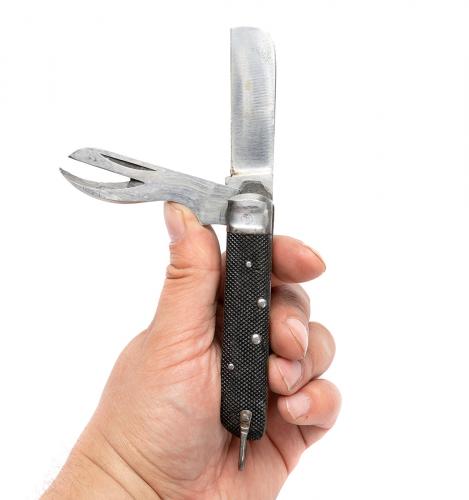 Opening is quite stiff before you oil the knife properly. 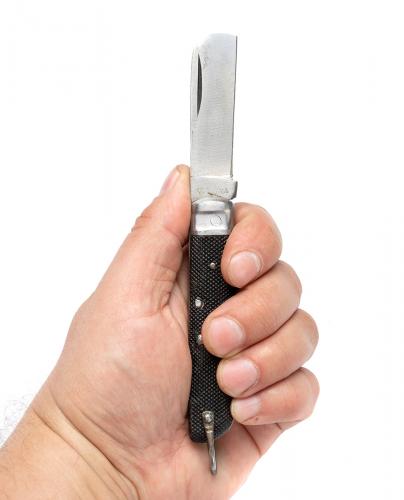 You cannot stab with this Italian safety blade 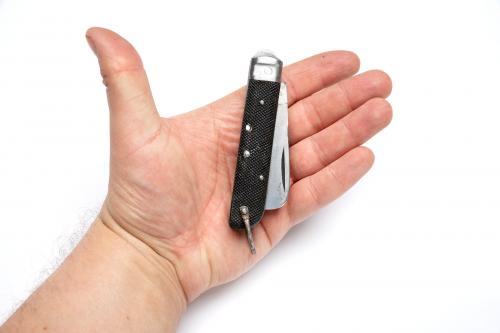 The handle is textured black bakelite/plastic.

These are unissued but have been stored roughly. So they can have some surface rust and grime that can be removed.
Italy

A really cool old-time friction folder with a wicked can opener. Not the shoddy shit that you often nowadays see but a pocket knife made to be used. These have been abandoned in some sort of a gloomy warehouse, so they are a bit rusty and stiff. A little bit of steel wool or very fine sandpaper, and oil, and they will be real purdy indeed. 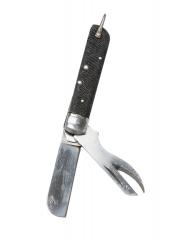 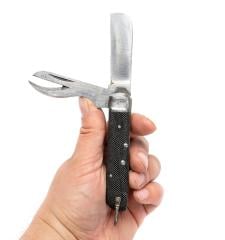 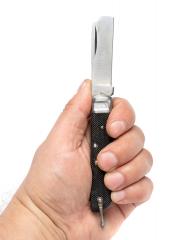 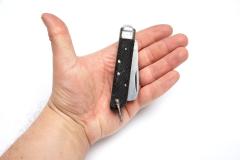 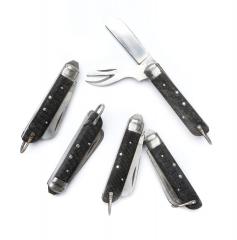 A really cool old-time friction folder with a wicked can opener. Not the shoddy shit that you often nowadays see but a pocket knife made to be used. These have been abandoned in some sort of a gloomy warehouse, so they are a bit rusty and stiff. A little bit of steel wool or very fine sandpaper, and oil, and they will be real purdy indeed.

For a mass-produced army tool, this is quite a cute little folding knife, Italians sure know how to design pretty things. What is also surprising is that the two moving parts (the knife and the can opener) are of pretty decent quality, although stiff. When you open them, they don’t lock in place but they sort of click, meaning that they aren’t wobbly in any way either. The grips are black, textured plastic or bakelite

For some cosmic reason, the knife tip is rounded like a butter knife, because apparently soldiers aren’t fit to handle anything pointy. So, the scary-looking can opener is more dangerous, and an unskilled person can do some nasty damage to everything but cans with it.

Just like all good Italian war gear, these are unissued. Although with these you should think of unissued as used since these have been warehoused rather roughly. So, they can be grimy and a bit rusty. The blade opening is also as stiff as the behavior of government employees. But unlike the latter, you can make it quite nice with oil.

No maker marks.
Blade unsharpened, but easy enough to put your preferred grind/bevel on it.

VERY gummed up & stiff when received - due to old dried grease, etc.
Quickly cleaned up with a green scouring pad & a couple of drops of gun oil had the hinges smooth as butter. No doubt thess will ease more with use.

Will be back for more if they're ever re-stocked, as they'd make great little gifts for folk that appreciate a well made knife.

Perfect for re-enactors as they could pass for older wartime knives.
2

Bit hit and miss, I have two, one is very loose and not that usable, even after a clean up, while the other came up very nice indeed after a REALLY GOOD DEEP CLEAN and oil up. Overall a nice knife, just not certain of hitting gold or getting a dud, so, buyer beware!
1