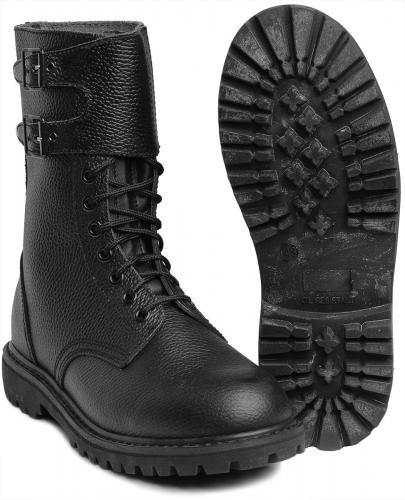 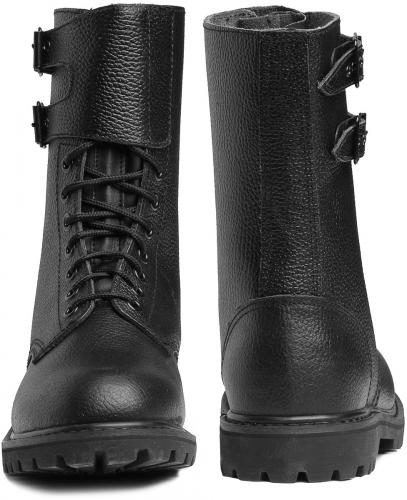 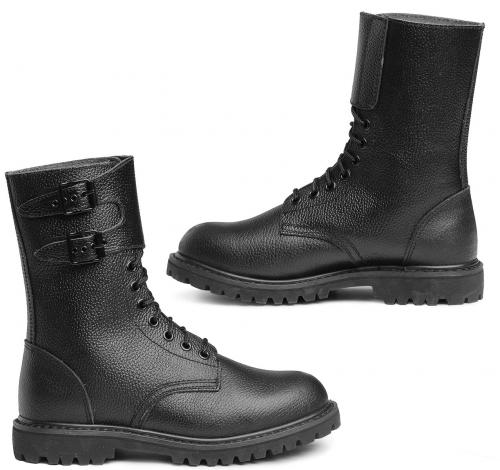 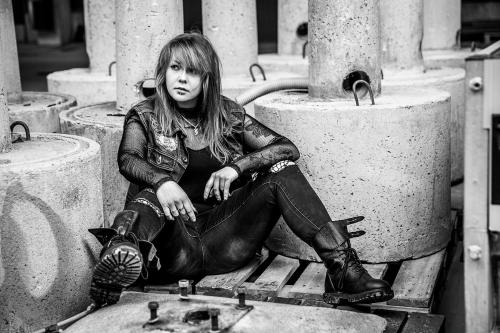 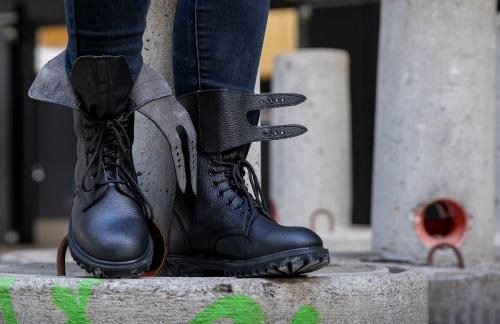 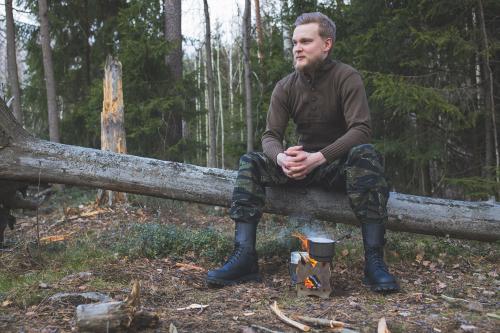 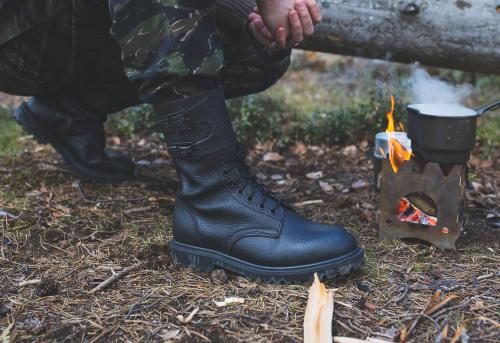 If you gotta have buckles on your boots, now's your chance to get some. We got these from French army warehouses, but the quality is, well, shall we say "civilian standard". These are NOT the original BM65 double buckle boots but they have visited the French army, so they are "surplus". All clear? 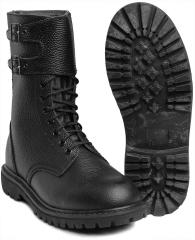 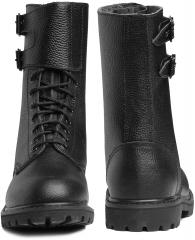 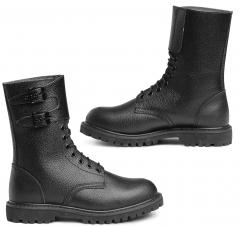 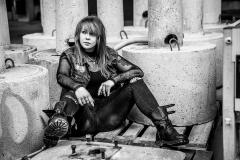 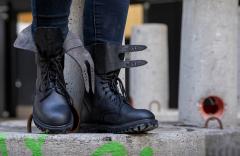 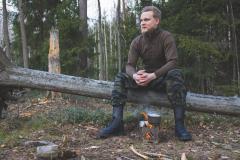 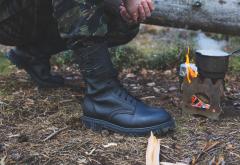 If you gotta have buckles on your boots, now's your chance to get some. We got these from French army warehouses, but the quality is, well, shall we say "civilian standard". These are NOT the original BM65 double buckle boots but they have visited the French army, so they are "surplus". All clear?

There is this mystical thing about these particular boots. They came to us under the name of a well-known French military boot manufacturer Boche. However, even though the larger crates had the Boche name, the individual boots and their boxes don’t - instead they were marked as "GPB" and "YZ-1" on the tongue of the boots. Our intelligence ops didn’t provide us the absolute truth so the origin of these boots is a mystery. However, we strongly suspect that someone had these made for the French army outside Europe, for example, China.

Sometimes you get nice surprises with military surplus, sometimes not so nice. Because these aren’t what they were supposed to be, we sell them cheaper than what we originally intended.

Even though these are French military surplus, their quality isn’t quite what you have come to expect from proper military gear. The leather is a bit thinner than in the original BM65 boots and the craftsmanship isn’t as neat. In comparison to the average footwear, it isn't particularly thin though. At this price, these are very nice boots for regular everyday use.

High enough bootleg and double buckles make these suitably punk - with or without steam. So, they are perfect for gigs and dirigible captains.

These combat boots seem to have a Goodyear welt construction, with a rubber Vibram-style sole sewn on, which you don't usually see on boots of this price category. They are made of black leather, and the cap is hardened but they aren’t safety boots, so don’t let a tank run over your toes.

During WWII, Americans came up with the cunning plan to marry gaiters and ankle boots and their offspring was a double buckle boot that was named M-1943. Many other countries, including France, copied this idea when designing their post-war boots.

The oldest French double buckle boot, "Mle 52", was created exactly this way. In the ‘60s, French designers realized that there are better ways to do this. The resulting one-piece solution was easier to manufacture, more comfortable, and more durable. After this, the biggest change has been the material that was changed from brown leather to black somewhere in the ‘70s. Nowadays even the French are unfortunately getting rid of their buckled boots.

The sizes are in normal Euro sizes. However, the French sizes seem to have been designed for bare feet so you will be better off by taking one size bigger than you would usually do. Especially since you will get more out of these with double socks. Merino wool is the ideal material.

We do not want to lead you astray, so here it is again: These came to us from the French army warehouses so they are army surplus, but their manufacturer is unknown (GPB?) and the quality does not rise to that of usual military footwear so we suspect these are made in China. These are NOT orignal BM65 boots. These are unissued and come in the original box. However, remember that insoles aren’t necessarily included, at least not very good ones. So, you should buy a good pair, for example from us.

Agree with the comments above in Finnish/English: new boots, don't have the feel of surplus. Nothing special. 'GPB' Brand - which returned few responses online - perhaps readers can identify. No evidence of country of manufacture. Leather seems too light for intended suggested purpose as a combat boot. Would a French military boot have 'Oil Resistant' en anglais on the sole or arrive in a box giving details 'Color: Black. Size 44' rather than, perhaps: 'Coleur: Noire. Pointure 44'!? Caveat Emptor.

PS: Fair dues to Varusteleka for taking the boot back and the excellent after sales service.
4

I have another two real french pairs so I thought to grab these. The 43 is a 43 fit. i'd say slightly wider than the genuine french made offerings.
Will most likely wear these ones out first and hold onto the 'classic's
1

I wore mine in the mountains for their first short walk today - up a dry footpath to a mountain refuge I was checking out for some repair/improvement on its dry stone protective wall. They were alright for that: no rubbing or tightness. I am size 44, so I bought 45 which is roomy enough for my usual 1 thin & 1 thick pair of Särmä socks, and a bit of hot summer foot expansion.
I prepared them using the excellent Tallipoika yellow boot gloop, and a bit of foot taping for me, just in case. One has to wear them with the trouser legs inside the double buckle extension, which makes a good short gaiter. They'll rub on your shins otherwise. However, they did feel tough enough for the hills, and the insole felt comfortable.
So far, so good, and I'm ready for a longer mountain walk in them.
I'll get back to you on how waterproof they are around the sole, though...
...good seal around the sole, but they leak through the lower tongue seam, which I found out during their first decent mountain walk a week ago. So I slapped on some tar made from dead reindeer that I bought here a year or so ago. No awkward rubbing or blisters, tho'. I'll use them for Summer walks, and go back to my pair of the excellent Swedish M59 boots, Swiss gaiters and foot wraps in the Autumn. The latter have been the only waterproof boots I've ever owned. The mountains I work and play in have killed three pairs of Lundhags and several pairs of Welly Boots in the last decade or so. Combat boots are hopeless, and boots with linings in soon become a liability.
0

Good boots so far. Would recommend proper long socks for them, otherwise it'll mess up your shins on the long run. The store's own boot socks are plenty long for it. I ordered one size larger just in case, it was too big for me, but with my usual double wool socks and a new insole I am filling it out nicely, can't complain. Durability hasn't been an issue so far, but the product is recent. I am using it about every second day in the city, no time for going out to nature, will update this if I don't forget.
1

It is made of extremely cheap, foul smelling bonded leather (ground up, glued together leather waste scraps, same way particle board wood is made). The outside texture is artificial and the buckles flimsy. The upper is attached to a cheap, dollar store rubber sole. I wouldn't even pay $15 USD for these. These feel like cheap reproduction boots, newly manufactured in China.
8

The product as received is what I would expect if I had ordered from Wish.com instead of Varusteleka and had paid 20 euros, not 70.

Everything about this boot is cheap and poorly made.

The leather is poor quality and the inside peeling and stained, the buckles are flimsy stamped metal and arrived bent... I I can go on but I'd rather not, the sooner this is out of my life and thoughts the better.

It's possible it would hold up better than it appears it will over time, but considering everything I've already mentioned I'm not going to take that gamble.

Report abuse
Gaëtan D. 03.05.2021
The last batch of these (officials) boots where made in Tunisia, and yes it sound like "rawnjars", with the most common "rawnjo".
0