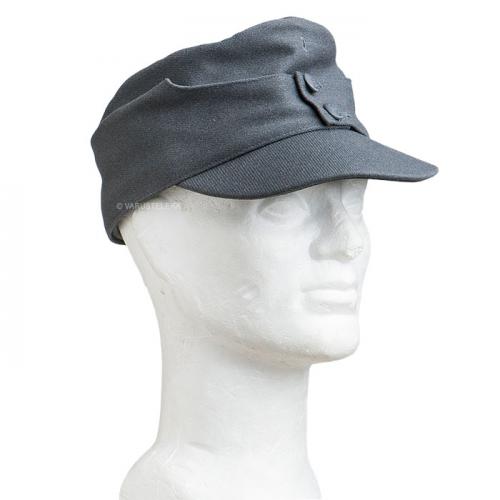 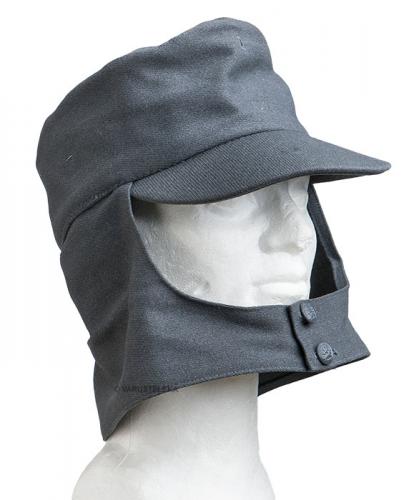 The Finnish army field cap of the post-war era continued to soldier on with the name of the classic M36 cap despite its obvious differences. It's still very much like the "blood scoop" cap used during the war years - has that same scruffy "frontline grunt" appearance although the visor is now hardened with leather and the fabric is a tad nicer. Unissued. 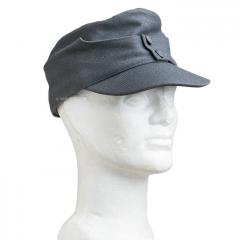 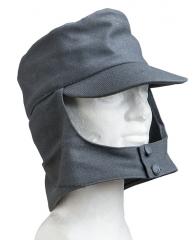 The Finnish army field cap of the post-war era continued to soldier on with the name of the classic M36 cap despite its obvious differences. It's still very much like the "blood scoop" cap used during the war years - has that same scruffy "frontline grunt" appearance although the visor is now hardened with leather and the fabric is a tad nicer. Unissued.

Made of nice quality thick diagonal weave wool and nylon lining, has a leather sweatband and rigid visor. Like with the old wartime caps, this one has fold-down ear & neck protectors. While undeniably useful for protection against cold, sun and insects to some degree, they make the hat look absolutely ridiculous, so they're best kept up.

The Finnish nomenclature with post-war field caps is quite something: these have been around as M36, M61 and even M65 caps (and there still is a different M65 cap, lighter than this one). The earliest year of manufacture we found stamped in the caps was 1961, most are made in the 60's.

Given sizes are head circumference in centimetres. Divide by 3.142 and then by 2.54 to convert to head diameter in inches (US size).

These have just been stored until they went obsolete and were replaced by the rigid M65 model, which was in turn replaced with modern baseball caps and yada yada. At least on paper.

Great item for that price. Very comfortable, warm, absolutely good made.
I received brand new with 1978 made label.
23

I love this thing, very true to size.
13

Old school quality, very well made. quite dirty though, need a thorough washing. Mine was made in 1961 !
14

Amazing! The quality and condition of the hat is remarkable. You never find high quality surplus hats like this, they're usually Chinese knock offs that you find at some third party retailer. But this totally is the real deal. Quality of the fabric is really great! The leather sweat liner is clean and ready for adventure. Would recommend using this one in the winter since it is made of thicker materials, especially if you live in the west coast of the United States. For the price, you can't beat it. I've seen them on other sites going for $40 to $50 almost surplus. If you're looking for a great quality hat at a steal, get yourself one before they're gone. Mine is made in 1972.
14

Spot on.Great quality field cap, sizes are on the mark
11

Extremely good quality cap right here. It might not be the lightest cap around, but it sure could take some use and abuse.
4

The best field cap ever made, period. its really true to size, is unused, nice and warm and looks awesome.
I really wish these things were more accepted since when i showed it to my brother he instantly associated it with the germans during ww2 so wearing it while getting your groceries might not be the best idea. i love wearing it while walking my dog though. the labels are still on and the quality is good enough that it will outlast you. the small buttons on the front are plastic and might need replacing if you really abuse it for long enough. luckily these buttons go for 1 dollar at varusteleka. i cant come up with any complaints about it.
7

These are great and original , very high quality.
4