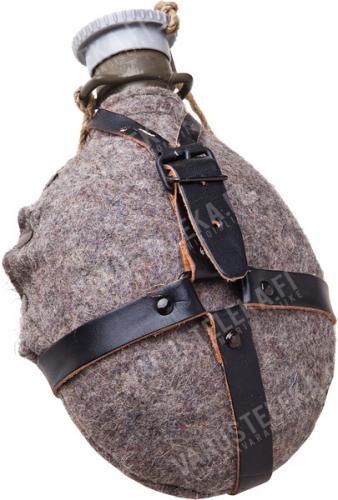 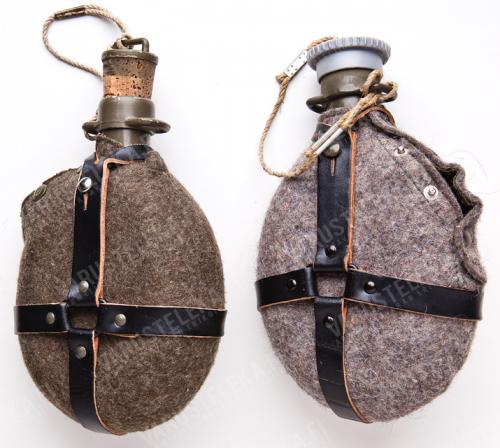 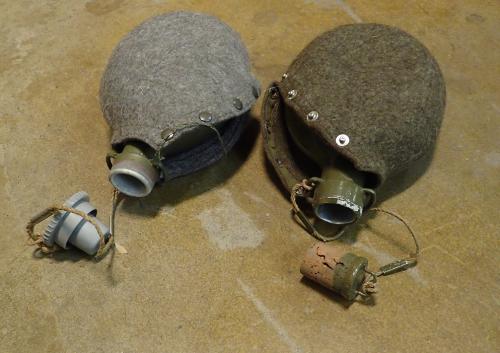 A Czech issue aluminum canteen with a felt cover and leather straps. Mostly communist-era stuff, these were probably used from the '50s to the '90s. Looks like it came from the same design table as the German Wehrmacht water bottle, but certainly isn't identical. 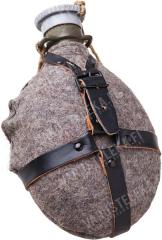 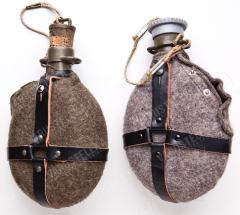 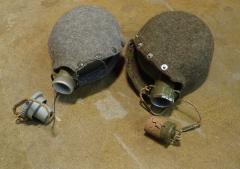 A Czech issue aluminum canteen with a felt cover and leather straps. Mostly communist-era stuff, these were probably used from the '50s to the '90s. Looks like it came from the same design table as the German Wehrmacht water bottle, but certainly isn't identical.

The cap material varies, some are cork, some plastic.

Used, but perfectly serviceable. We strongly suggest washing the bottle well before use, just in case. The overall condition looked pretty nice.

Got three of them. First one was a lemon. All dented, full of limescale and unknown central european cold war microorganisms. Both straps and cover seem to be used as fuck. Just saved the nice plastic cap and hand washed the cover. The other two were probably unissued. The best one was a 1955 (!) canteen, with cork cap.
Best for collecting tho. The plastic caps leaks anyway and the cork one its just a gimmick. Still will try the '55 one. Boiled water on It so it'll be fine.

The leather straps were in really neat condition, looked almost unused - strangely though, the bottle itself seems to have seen some really rough times. Badly dented with the coating falling off. Still a nice collectible.
2

I am very happy of the canteen quite simple does what a canteen has to do.
like expected there is some use in my specific that use what mostly the leather straps.
The straps being bit ot the tougher side, allthough with some wax or alike i can likely make it 10-20 years younger with some care and elbow grease.
All in I would recomend this for anyone who doesn't care to put a small bit of care into their kit.

Mine is apparently unissued. The cork is a bit compressed from storage. The cover and straps are completely new. The condition is far better than the scuzzy ones I've seen in local surplus stores.
0

I have 3 of those. Bought them somewhere else. They all leak. All 3 of them. They look awesome, and I´d love to actually use them, but they fail at actually holding water inside them. So only use them for decoration.
0