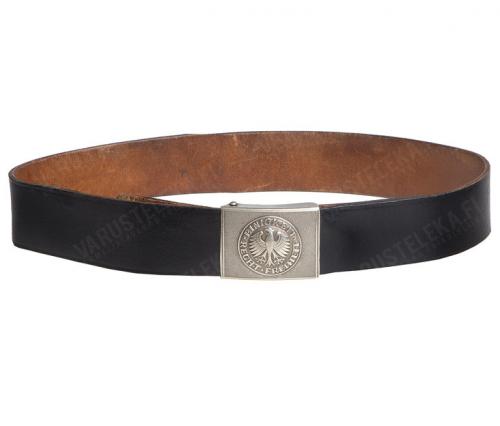 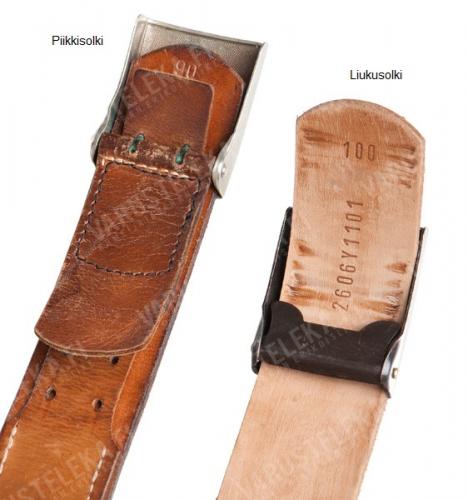 The Bundeswehr parade belt looks like a relic from the times when the German bootheels last clacked around Europe. 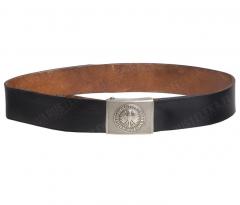 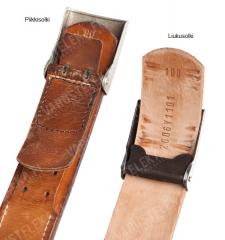 The Bundeswehr parade belt looks like a relic from the times when the German bootheels last clacked around Europe.

Complete with a metal buckle with the national eagle and the motto of the Democratic Germany: "Links Zwei Drei Vier!" or something. These are getting harder and harder to acquire! If you want one, we suggest taking action pretty quickly, JA!

Two different buckle adjustment types: two prongs inside the buckle into a suitable pair of holes in the tongue. Some belts have a simpler sliding adjustment, which is stepless and can be adjusted down as much as you like. We do not differentiate.

Sizes are the maximum lengths of the belts. These can be adjusted about 12 cm downwards (the two-prong-buckle types). Because Men of Girth have more money, larger sizes cost more. However, it's still a good deal for a belt of such impeccable quality.

In used, but good serviceable condition. This will probably outlast the user. This lot was dug out from the deepest levels of our supplier's warehouse. It's very possible these won't be seen again once this batch is gone.

The belt looks similar to the pre-ww2 military belts (Czech/Finnish/German) but is 5 mm wider, so you can't use other buckles. Just so you know.
Other than that, it's a good belt.
6

- why a minus?
Size matters
These belts have last (many) life times
Their original size
; mind you : a 1/4 mm difference would not pass DE MilSpec but these belts (all of those 100 cm i ordered online were almost all 70cm ... my waist was 90 cm so training was the only way to get the belt to fit. Again blame time and people who customized their belts, not Varust. In the original belt design of this BW Parade belt is a+5 cm / -5cm adjustement.
0

Super quality here! Mine came almost new. Glad I acted fast on getting it!
0

Five hundred stars for this belt.
received one with the two prong buckle UNISSUED. Brand new and never used.
A 5cm large, thick piece of leather with an indestructible buckle.
Smart and Very sturdy.
Great belt !!
0

Item was in issued condition, with some use marks. Got the "prongs and holes" edition.
It is really wide (5cm), does not fit the BW flecktarn pants.
Buckle looks very nice though, after I'll get it cleaned up a bit.
0

Mine came as good as new. Just a few scratches and a small dent on the top and bottom of the buckle. The belt itself only has a small stripe on where the buckle used to be. Must have been worn by a woman, i ordered the 100cm, and it was moved back like 20cm.
It barely fits the Särmä Cargo Trousers, since it is really wide.

EDIT:
Ordered a second one for a friend, the 90cm one this time. It came in almost mint condition. 2 Prong system this time. Came with some corosion on the metal.
Thanks Varusteleka for providing us with belts that will last more than a lifetime.

Also, it says "Unity, Justice, Freedom" on the buckle.
1