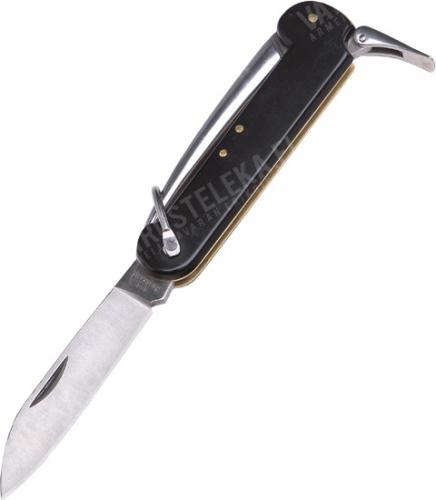 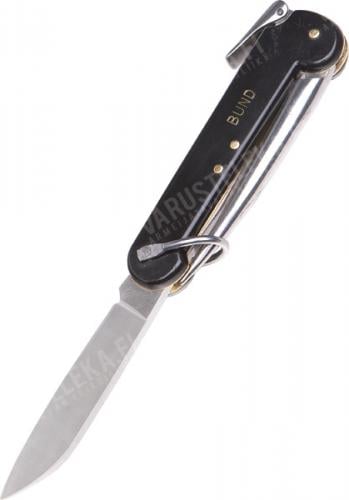 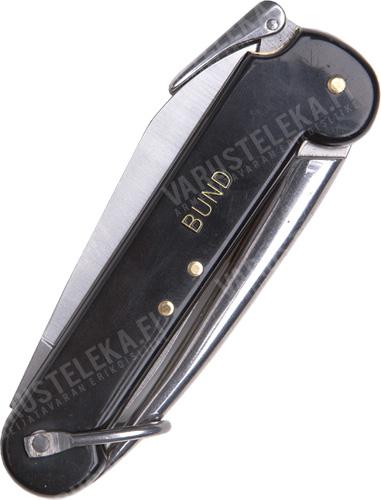 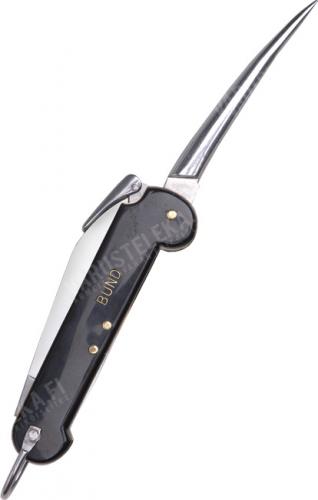 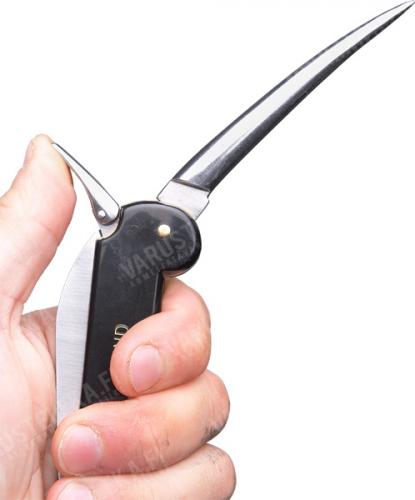 Traditional German navy knife with Marlinspike. This is either genuine issue stuff, or a remarkable reproduction, but in any case a good tool for an affordable price. 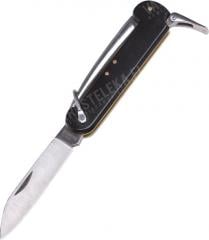 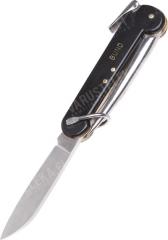 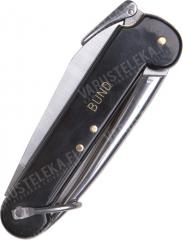 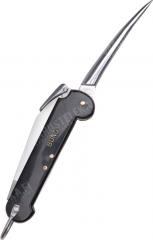 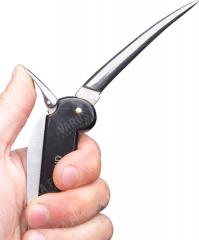 Traditional German navy knife with Marlinspike. This is either genuine issue stuff, or a remarkable reproduction, but in any case a good tool for an affordable price.

Very few people know that MacGyver was based on an older German TV series, in which an astute German mariner solved problems with his brains and a pocket knife. He didn't flail his open hand in pain after punching someone, used the Marlinspike to interrogate his opponents, and was generally not a good role model for youngsters, so the grip panels of his knife were black of course.
The series was re-made in the '80s by ABC: the character was written to be nicer, he got a Swiss Army Knife with red panels and a Jeep instead of a boat. The mullet was retained.

In all honesty we can't tell if this knife is an issue or not. The packaging is by Mil-Tec, but that's as far as it goes. Very slight signs of wear are found on the plastic side panels with "BUND" embedded on one side, "stainless made in China" is nowhere to be found. The stainless steel blade rather says "TSR Rostfrei" (at least most of these, as TSR is just one manufacturer with a contract) and general quality seems to be on a level not found from Chinese reproduction items.

The blade does not lock and the final closure is snappy because of the spring, being as this is from an era when consumers had some responsibility of their own. The knife also features a Marlinspike for ropework, which can be unlocked with a separate latch. A steel retention loop is found in the other end.

Factory new or as new. Manufactured by TSR, Germany.

Was issued this knife back when service in germany was still mandatory. If you ended your service, those were highly priced by the decks ratings, since they would actually use the knifes for work cutting ropes etc. This is a work knife, not as sharp as a Victorinox, but the blade is much more sturdy and is easy to sharpen. Newer models like mine come with a bottle opener at the base of the Marlinspike (because everything in the german armed forces will be used to open beer bottles, so why not add it into the design).

For added credentials you want to make yourself a knotted lanyard out of cord. Bonus if it is shaped like an anchor.
46

Good robust knife overall. I would also like to point out that the blade is thicker than than usual to help you when you inevitably hit the back of it with a stick when cutting rope.
3

Excellent tool and well built. I love it and it's a fantastic price. It is smaller than my Royal Navy issue seaman's knife which is Sheffield steel and rusts like hell if you neglect it. The Bordmesser is stainless, compact and has a locking pricker (marlin spike) the blade is very easy to sharpen and the quality is very good. Backed up by excellent service I'd recommend this knife to anyone especially those involved with the sea, get it while you can!!!
3

This is one beefy folding knife, the marlinspike locks in with a very satisfying positive snap and the blade is reassuringly thick. You get the feeling that you can absolutely manhandle this knife, and it will just take it. In a pinch, I am sure the marlinspike could be used to repel any piratey types who would board your ship.

The blade folding action on mine is a little bit sticky, but I suspect the mechanism just needs a bit of use to loosen up. Really just an excuse to use this fine knife as much as possible!
1

When you first get your hands on it, you will be surprised by just how solid it feels. Swiss Army knife feels like a toy, this is a man knife. I got it for collection, but it is a solid everyday tool for a bit harder tasks.
Mine is a bit older model, where beer bottle opener is rudimentary or nonexistent, pointing at genuine surplus item from decades back. Real men open beer with another beer anyway.
2

I bought one of these Bordmessers a few months ago, and it has quickly become part of my daily carry. It has a heavy, sharp blade--not locking, but not a problem. The blade's spine is very thick, roughly 4-4.5 mm, and I imagine you could probably use it for batoning, but certainly heavy enough for cutting ropes and cables. The marlinespike is a nice tool to have, even if you're not using it for nautical work. It's definitely useful for any kind of rope work or dealing with knots. For the price, this is a great little knife.
1

Really solid construction. Well made. I just wish the latch for the marlin-spike had tighter tolerance so that it would stay closed when everything is folded, otherwise it'd get a full rating.

Lanyard loop broke off without any force. So now I won't be able to attach anything there unless I find a way to fix it. Maybe a jeweler can put a new rivet on the one side. Everything else is still solid but kind of a let down.
1

Overall an ok knife the reason I can't recommend it is the locking latch is loose when everything is folded. Its very annoying to me but if you can look past that, its a good knife
0