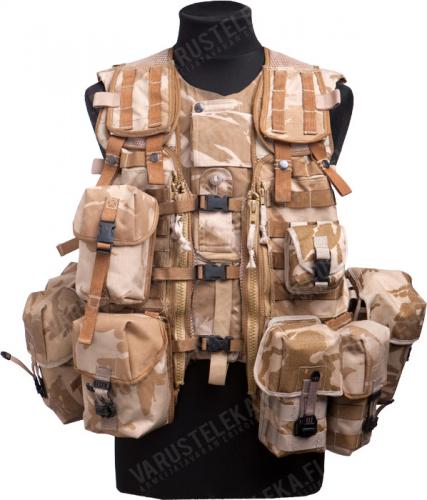 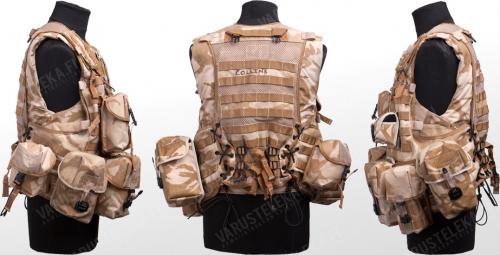 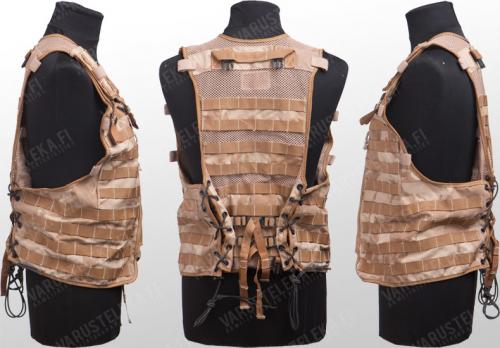 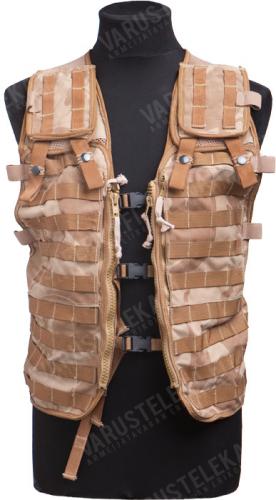 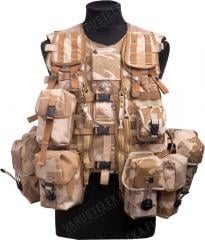 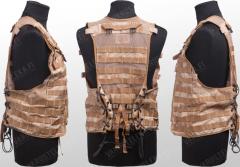 Note: the body armour seen in the pictures is not included.

Note 2: the above list is an example of what you might get. The composition of the pouches might vary a bit. Hey, a genuine Osprey set for this price is a solid deal if you ask us!

The British Osprey system is similar to the US MOLLE system and Interceptor body armour. The vest is meant to be worn over body armour and equipped with the pouches you need where you need them.

The vest itself has two smaller and two larger hidden pockets. The large pocket on the right fits a pistol and two magazines. The back has a small pocket for a map or wallet. On the outside, you'll find quick-release buckles for a PLCE rucksack side pouch or compatible hydration carriers.

All pouches and the vest itself feature the Desert DPM camo pattern and NIR protection as usual with modern war stuff.

Osprey vests have been in use in Iraq and Afghanistan by all branches of British armed forces.

The vest is designed to be worn over body armour, but it doesn't have to be specifically the Osprey body armour. Without body armour, you should have a lot of clothes or weight because even when adjusted all the way down the circumference around the torso is about 100 cm. The sides are adjusted with weaved drawcords and the length is adjusted at the shoulders. The adjustments were made with bigger fellows in mind.

The pouch attachment is very similar to the PALS webbing found on MOLLE gear. The measurements are slightly different, but generally, any Osprey stuff goes together with MOLLE either way. The vest is covered with webbing so you have a lot of room for creative solutions.

Used, and in perfectly serviceable condition. The vest in the picture is unissued, so expect a somewhat more faded vest.

I bought this figuring that I was going to get some crappy combat vest that I could steal pouches off of. I was completely wrong this thing was used but in great shape and great value for the money. I'm giving it a 4.5 out of five because some limy spilt tea on it lol definitely getting another for sure
20

Excellent value. The vest I received came with 13 Molle pouches: Utility x 3, small utility x 1, medical x 1, grenade x 2, 40 mm grenade x 2, SA80 ammo x 2, water x 1, torch x 1; as stated in the description, this will vary. The vest and the pouches were in great shape. I am over 6 feet tall and over 200 pounds, and the vest fits me well; it is adjustable smaller and larger. The 40 mm grenade pouches are the smallest; I made one into a fire starter kit (ferro rod, cotton balls, esbit tabs). A standard 1 quart US canteen does fit in the water pouch. I plan to order more.
21

Received the vest today and I couldn't be happier. Not only is the vest well made and sturdy, it came with 13 pouches. Sweet fancy nut sampler, I'm as happy as a school girl who just got a new pony. This vest is a great deal for anyone who needs to carry a lot of supplies and still have your hands free.
3

Excellent stuff for an excellent price. Actually, insane price with regards to what was delivered. Top notch quality and mine looked almost brand new. Will blend in nicely in autumn colours.
5

For the price, this is a crazy deal. My stuff came in what looks like factory plastic - if the kit ever was issued, it's was to some R.E.M.F. who never even got it dirty. Obviously luck of the draw there, but I also got even more than what was promised as far as pouches; 2x mag pouches, 3x large utility pouches, 2x AP grenade pouches, 2x 40mm grenade pouches, a med pouch, a small utility pouch, a water bottle pouch, and a "knife/torch" utility pouch. Honestly better than I had hoped for even with the great reviews.
10

Report abuse
dennis Q. 01.01.2022
These were designed to take the UK Bergen side pouches (10 liter) clipped onto the back. Alternative is to buy the Tasmanian Tiger large pouch with pals straps and put that on. Other is the Sarma 10 combat pack and make your own straps to attach to the Pals webbing
1