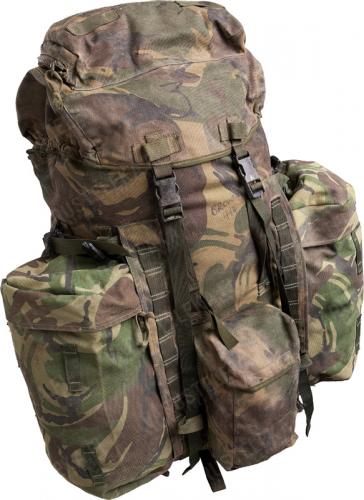 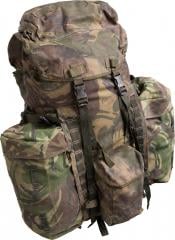 These particular rucksacks are missing their internal aluminium support frames. One can easily be made using flat aluminium bars (the original frame is essentially a TT-shaped piece of metal, so the only things you need are some screws or rivets, and four pieces of flat aluminium (or iron) bars). Even without the frame the rucksack is perfectly useable, you just need to pack smart and carefully.

After the Falklands war the British army were convinced they needed a large rucksack, which - unlike anything issued at that time - would be ergonomic to carry over long distances. The civilian manufacturer Berghaus had provided rucksacks for special forces in the Falklands and these were the starting point to develop a "Regular Squaddie" version, which would become the PLCE rucksack.

The rucksack has the volume to spare, but it's also well designed for use and carries. It has received compliments even from the end-users, who commonly complain about everything you can imagine and even if you can't.

Separate models are made for those with longer or shorter backs, and because we're nice and careful people we have sorted them in the warehouse. Here's a short size guide:

Used but in serviceable condition. The camo pattern is faded and these are not washed. Take a mild detergent, brush, and elbow grease to it if you want to. The rucksacks are likely to have small fixes, names or initials marked with a sharpie and so on.

I remember a Sqn Sgt Major of mine saying, whilst I was packing my '58 pattern large pack, "What we need, is a fucking big bergan." This was in BAOR in 1985, and the large pack was designed to carry one's spare clothing in when on a mechanised unit - anything bigger wouldn't fit into the truck or AFV, so I found it good for that. However, we'd have to use them as marching packs in basic training and even on promotion courses, so that's where it got its bad rep.
Well, we got the FBB. All 125l of it, not including in my case the PRC351 radio daysack held under the top flap along with the issue sleeping mat (commanders carry comms). So even that size pack was filled to capacity. The IDF are trialling wheeled quick release pulks, so it looks like we've finally reached the limit in what even a trained infantryman can carry on his back. When one looks at old WWII photos of combat soldiers carrying hardly any gear, it means that either they had better support services, or they got wet, froze and went hungry, or took what they needed from the battlefield...anyway, this is the ultimate FBB for carrying everything, and worth trawling UK based surplus sites to get the proper side pouches and harness rig. The waist belt is a bit weedy and not much use for transferring the 60kg or so one is carrying onto the hips, and there's no back system. This is because the Bergan is designed for infantry foot operations, but we'd be carrying it on top of the PLCE belt order, so anything more complicated like that found on the Dutch bergans isn't any use. It is a good bergan for non-tac use on its own carrying a large and heavy load, but one does need to build up the strength for that, usually on the first couple of days on a long trek, unless one is doing regular bergan training tabs. I was at a stage in my life when I was in the mob when I could carry the standard 100-odd lb tactical load on a few hours sleep a day (I weigh 154lb then & now). But then after the Falklands War every British infantry soldier eventually had that expected of him.
4