The books for last year have been cooked and our inspector has given the green light, so here's our retrospect. 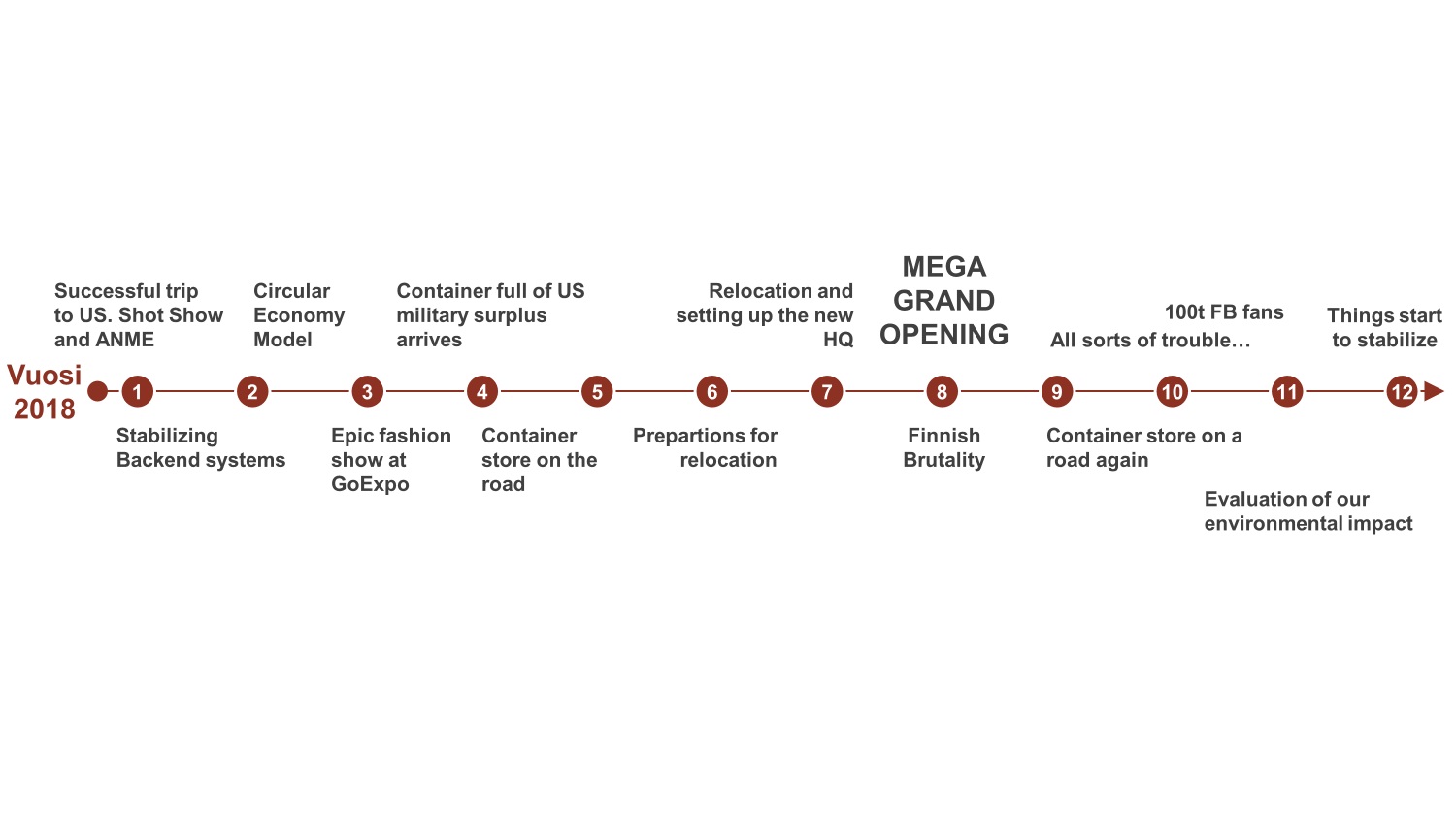 The past year was tumultuous at Varusteleka. The plans of moving to a new location started already in late 2016, could be brought to daylight and a victorious finish. Since the beginning of the year, we made practical preparations while also taking care of daily business, launch our Circular Economy program and throw a fashion show at GoExpo.

June and July were reserved primarily for the move. At this point, we couldn't entirely keep it from affecting customers and product availability, for example, wasn't always at the level you may expect. Sorry about that. As a whole we managed the move extremely well:

The warehouse was closed July 11th to 15th, that's just three working days. We shipped the first parcels from our new warehouse on Monday, July 16th.

The retail shop closed its doors on Friday, July 20th at 18:00 hours and opened doors at the new location on Monday, July 23th at 10:00 hours. All the stuff was moved from one shop to another during the weekend and we only missed one day of business.

The office folks went home from the old building on Friday, July 27th and arrived to work at the new address on Monday, July 30th.

Schedules were tight while challenges of the move were met and won. The Leka-crew can! 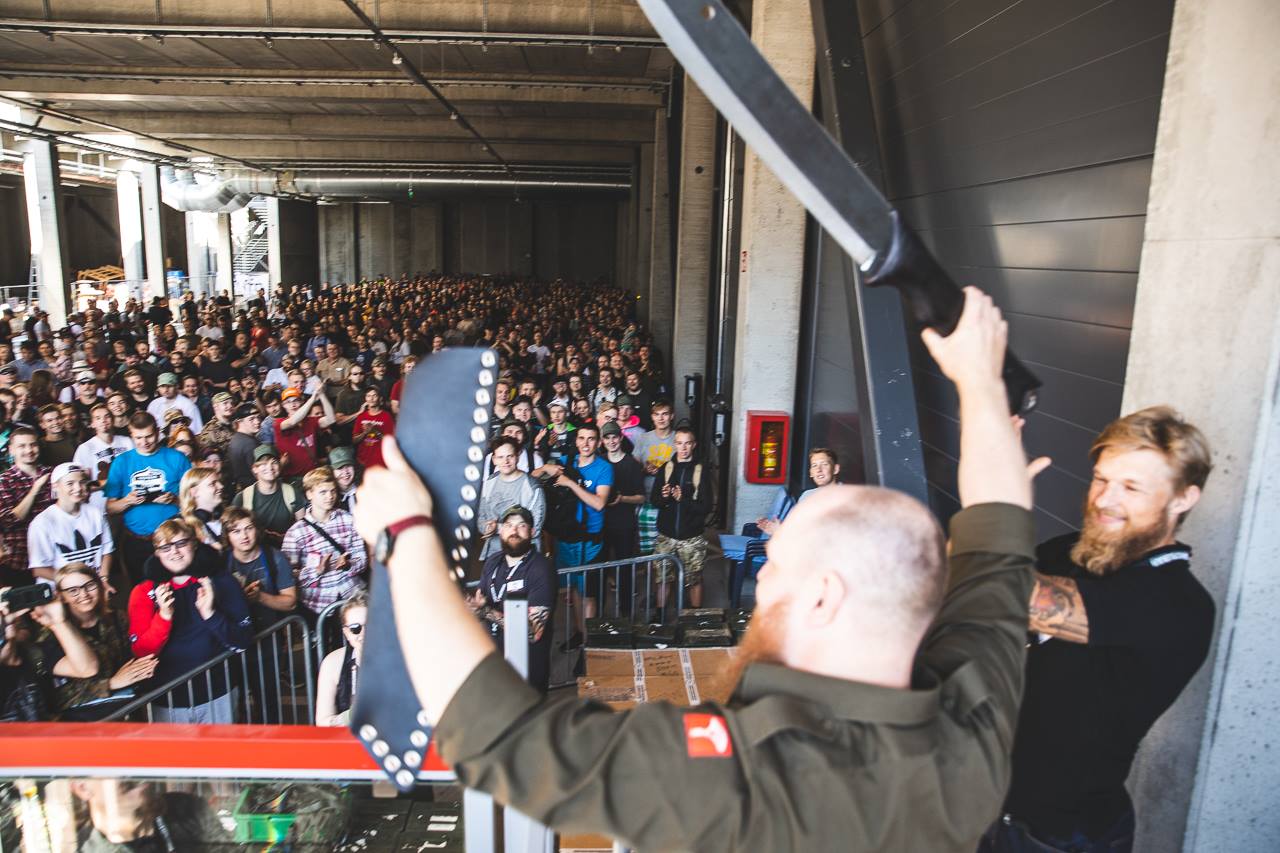 What's a move without a grand opening? To warm-up for the housewarming party, we organized a Finnish Brutality 2-gun action shooting match together with InRange TV. It's the first shooting event we organized and went as planned: ridiculously well. Based on feedback everyone had a fun and brutal experience. Again this year? You bet!

The Mega Grand Opening was the largest event we've ever thrown. We had free shit, special deals, novelties, sauna, a tank, beer, competitions, celebrities, bands and everything else you could hope for. We drew 5000 people to enjoy the show and a lot of beer was had, 1000 litres or 264 gallons or so. Who's counting anyway. We were encouraged to throw another fall party next year, so Lekafest 2019 it will be!

Wish it would be mundane

We spent the fall tackling issues from the move: new processes had to be ironed out, we had some technical difficulties, product flow was still unstable and the brand new building we moved into had its own teeting problems. Most issues were sorted come November and in December we could say our operations were stable.

On our domestic front our Finnish Facebook page reached 100 000 followers so we threw an insane raffle: the winner would get one of each Särmä, Särmä TST, Terävä and Jämä products. The huge pile shows what a large selection we already have covered with our house brands. Once again, congrats to the winner!

Near the end of the year we started to look into our environmental impact in a scientific manner. To replace guesstimates we launched a program to actually find out how unethical and destructive we are. A separate report will be published, but here are some key findings:

The biggest impact is caused by our purchases. Producing new items is a burden on the environment and having it shipped to us adds to it. More precise calculations will take some time, but at this point, our strategy is to produce more durable products, have them made closer to us and extending the life cycle through Circular Economy.

We spent 52 metric tons of packaging materials and printed 40 kilometres (25 miles) of address stickers to parcels. Optimizing this is is one theme, so far all of this material is recycled or recyclable.

Our new residence is significantly more efficient compared to the old one. At above 60th north these things actually matter: long winters with little light means we use more energy just to remain functional. We only moved here last summer, so year-around data is not yet available.

In conclusion we can say we put weight on the environment but we have a solid plan to measure what we do and then do something about it.

The year was very hard on the company and personnel, which eroded some of the more positive goals, but here are a few fun facts. In 2018, we:

Our turnover increased 4 % compared to 2017. By our standards, it's not something to pop champagne to, but given everything else that was going on, we can say we were successful. The growth comes primarily from exports. The United States is a growing market for us and our efforts to be a good shop for Americans is bearing fruit. Other rapidly growing areas are Germany and Japan. We'll think of something to convert them to our side as well. Exports account for roughly a fifth of our sales. 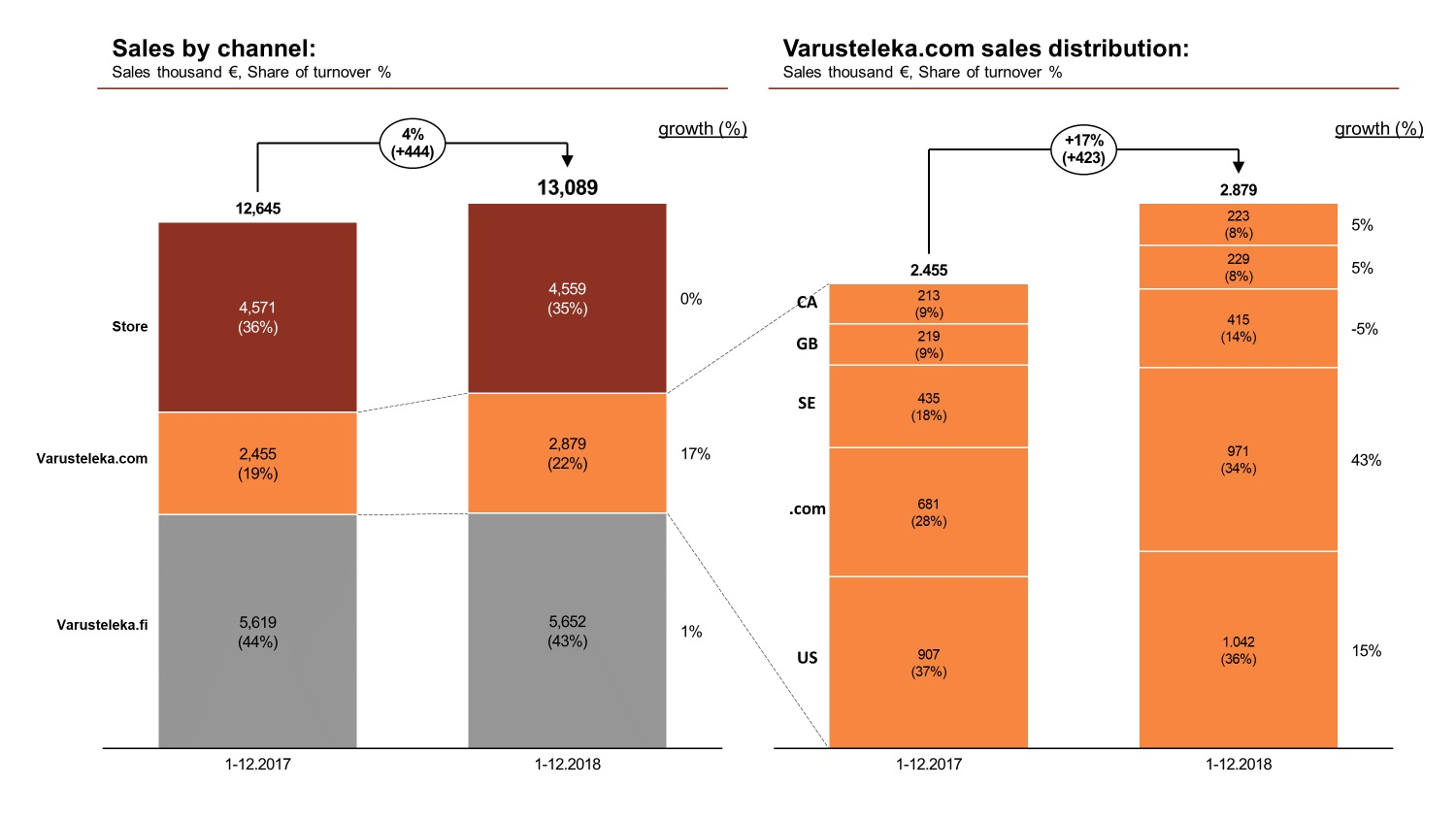 The divisions between surplus, house brands, and other brands has developed almost according to our strategy; surplus is lagging a little bit. Last year the sorting and processing of surplus things were hit by the move, which explains part of it. We have increased our efforts to get better surplus stuff for sale and you should see the results this year.

Our house brands are growing as we have intended. Särmä, Särmä TST, Terävä and Jämä are moving forward to become internationally recognized brands. Their share of our sales is at 45 % and rising. 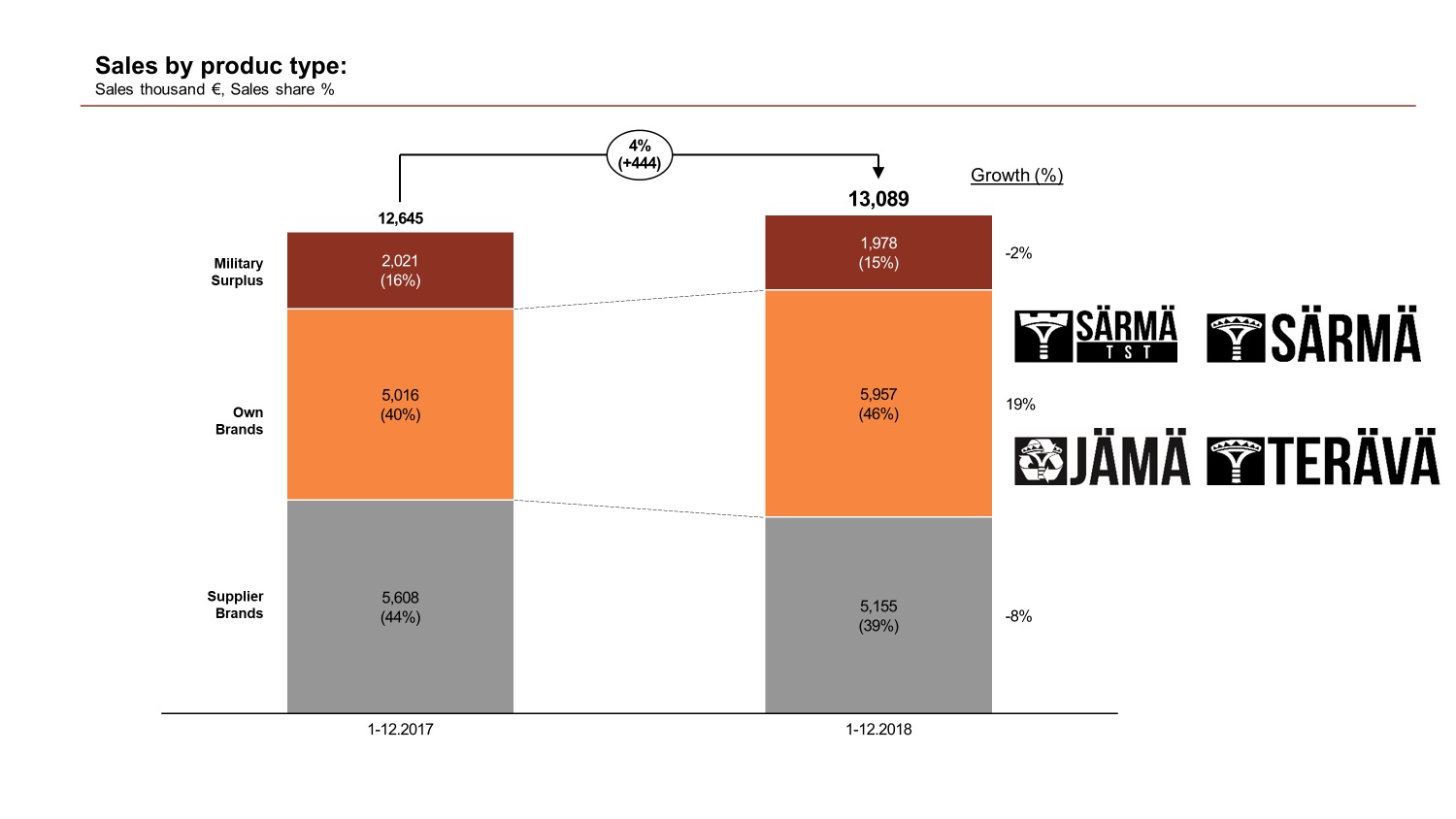 Everyone's uncle Bob and their dog loves Top-Whatever lists, so here's our Top-20 products based on turnover. No big surprises, a large chunk is taken by our own brands. Division of sales is steep: the Top-20 products are just 0.71 % of the products sold (by unit), yet brought in a whopping 20 % of the turnover. 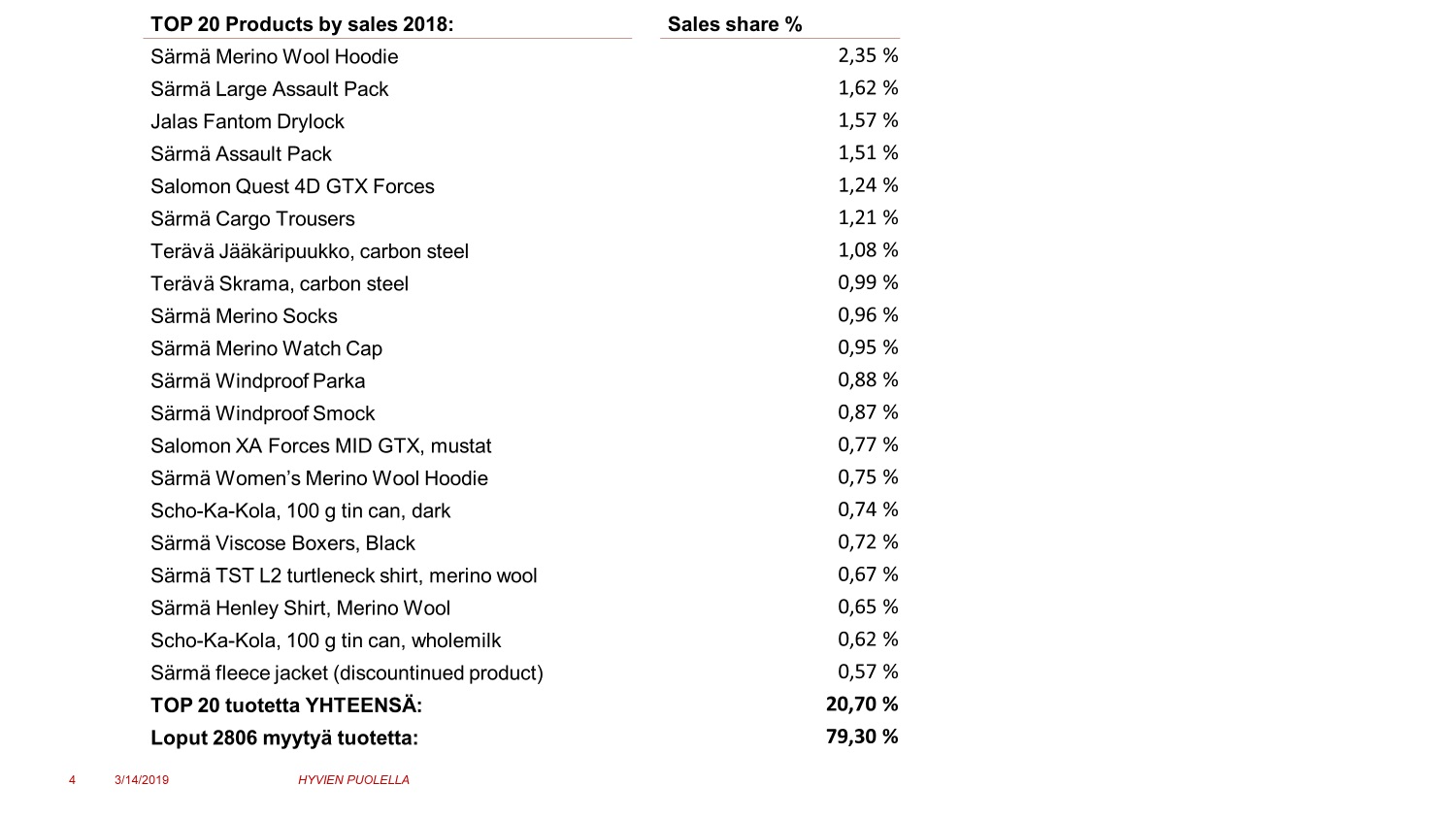 One of our envisioned goals is to do our part to balance Finland's economy for our part. In plain terms, we aim to export a higher value of products compared to the value of the products we purchase from other countries. We didn't quite make it this year, but it's very close. 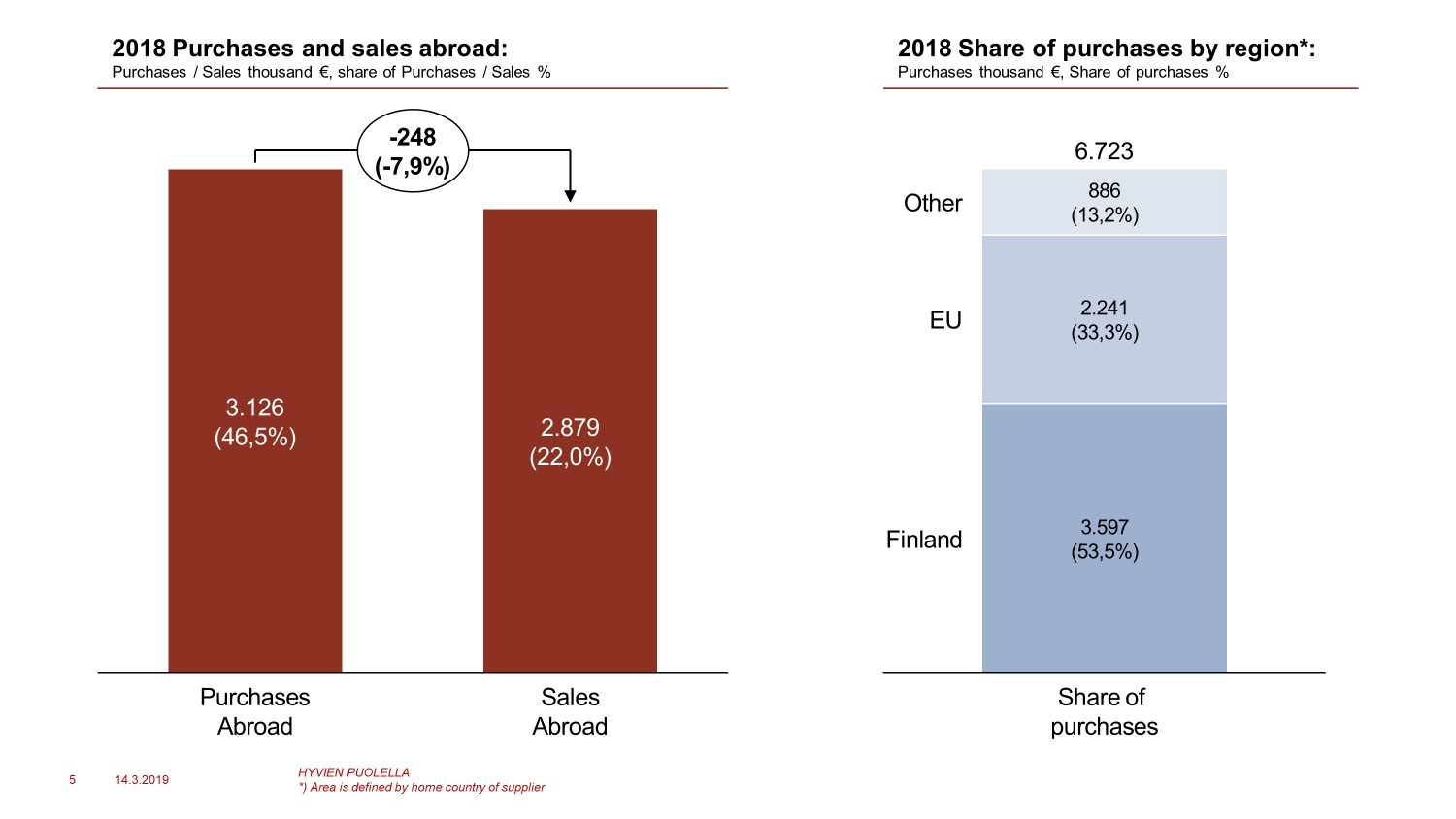 Our costs for 2018 spiked. In addition to the move - which was expensive as L - we have made investments and added workforce to get through the move. It's worth mentioning that we funded the move entirely with cash flow. This means we have a good base of operations to further Total World Domination, take advantage of our investments and not having to pay off debts. We were economically less viable during the time, but it was a means to an end and still good business with 448.000 € gains, which means a profit of 3.4 %. 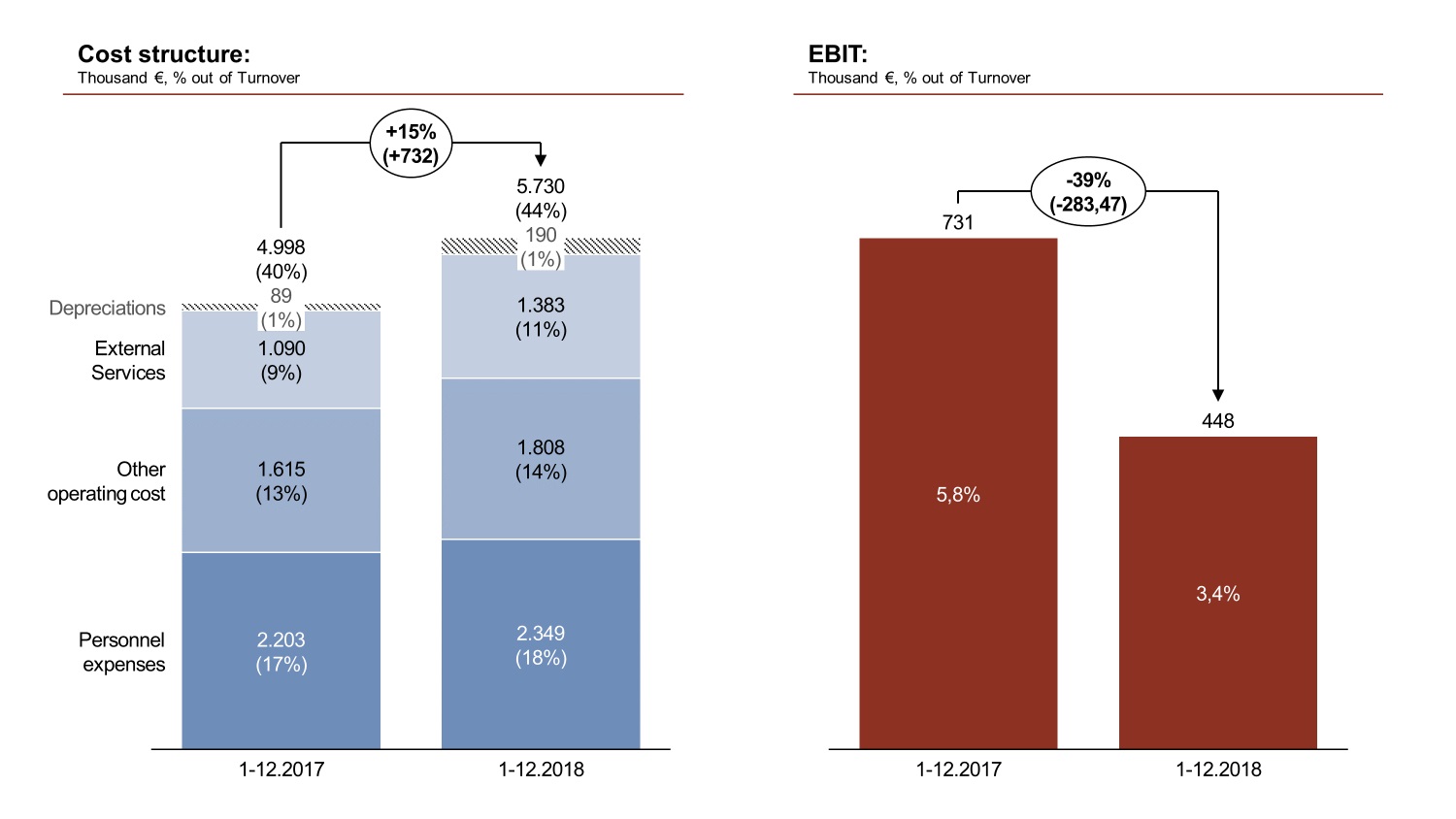 Where do we go now? Still moving forward towards TWD. The big picture remains the same, no need to make changes there. 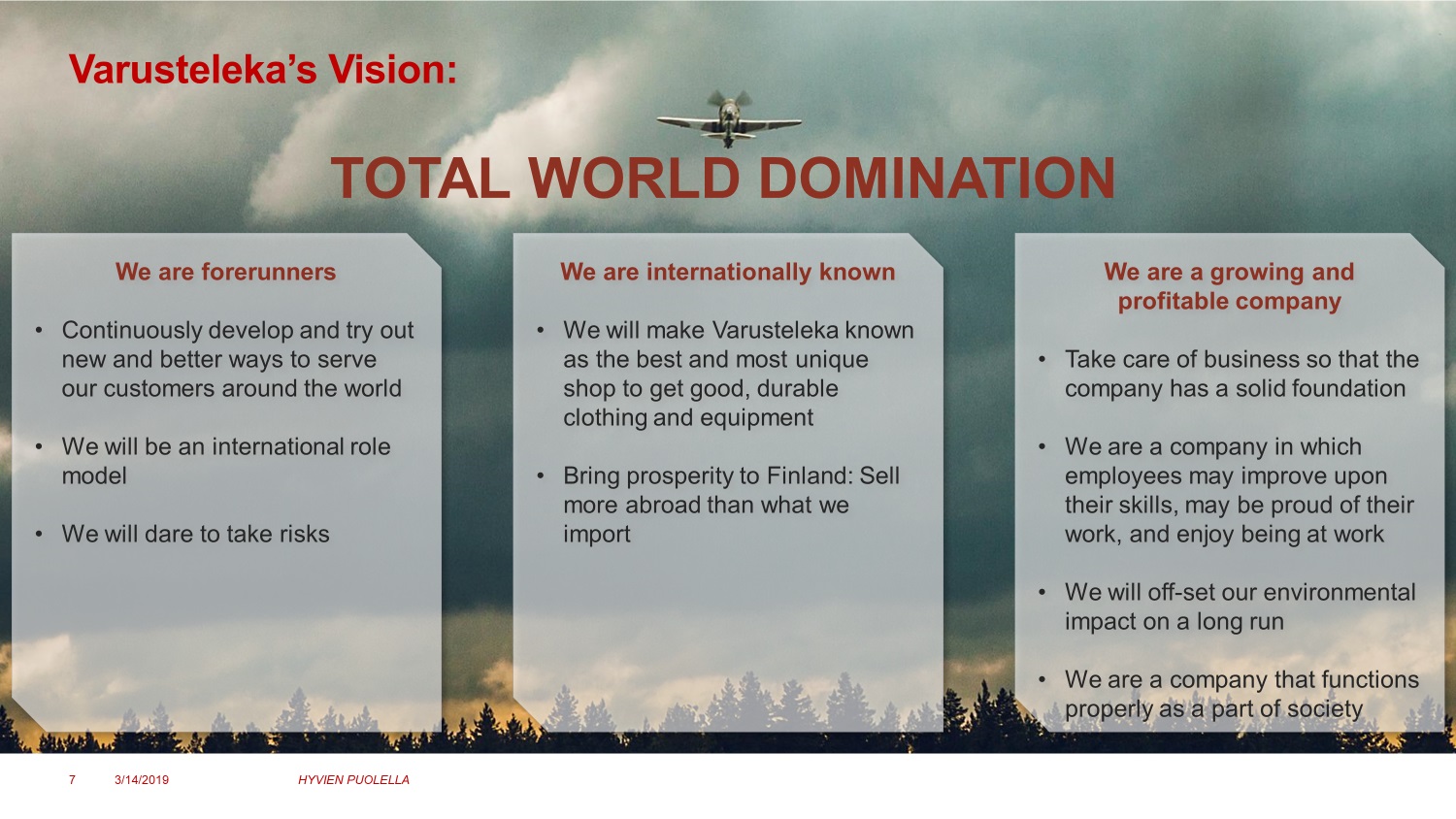 Weighted points for 2019 will be the following themes:

This year looks positive. We'll be even better to our customers and work better. Other interesting things during 2019 are the new releases from Särmä, Särmä TST, Terävä and Jämä, new co-ops with Polenar Tactical for example, Finnish Brutality 2019 and of course Lekafest, which will surpass Mega Grand Opening in the Mega and Grand departments.

The challenges of last year were won by our excellent staff and support of our loyal customers; kudos for sticking with us through the brush!