Using a Tarp as Shelter


Ah, the tarp: the versatile sleeping quarters and shelter of any bushcraft-minded camper, trekker, or hiker.

When you want to save weight without spending lots of money, not many items beat the tarp. All you need is the tarpaulin sheet itself, stakes, some cord, and a couple of trees or hiking poles.

Tarps come in many shapes and perhaps the most common ones are squares or slightly elongated rectangles. While there are shaped tarps for specific purposes, we concentrate on just the rectangular ones in this article.

A tarp is much more than just a piece of fabric: it can be shaped in many ways from a simple lean-to all the way to luxurious tent-like contraptions. Tarp shelters are well ventilated, pack small and light, and weigh a fraction of the weight of a tent.

The water pillar of high-quality tarps these days is just as high as on any tent and if pitched right, they provide a rather reasonable shelter from bad weather. Traditionally, even not entirely waterproof flysheets have been adequate when pitched carefully and adjusted taut. 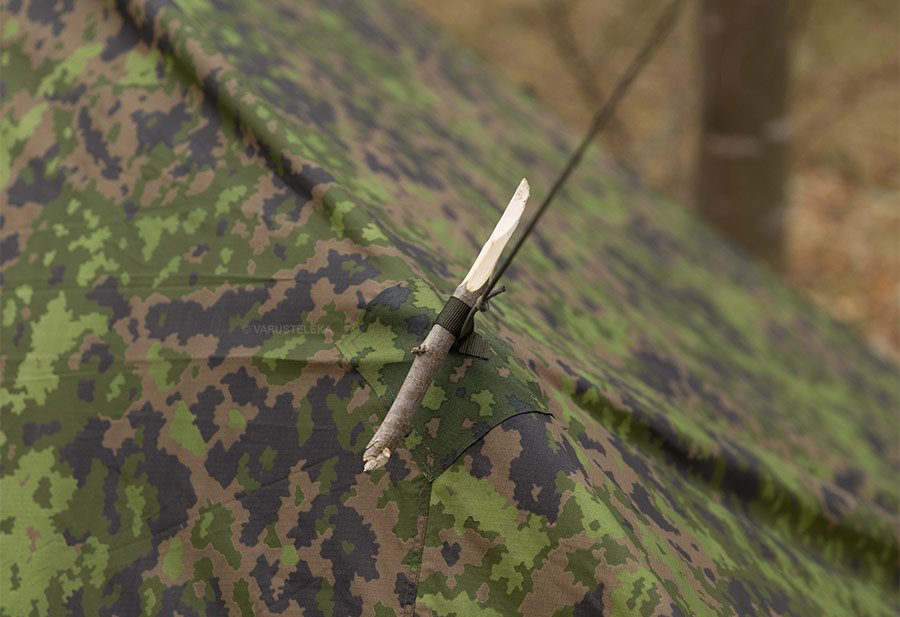 Tarps often have loops on the fabric, not just along the sides. This makes shaping and tightening easier.

The simplest wind shelter is a tarp tied upright between two trees, which can make cooking or a long break much more enjoyable.

Setting up the tarp

Before even unpacking the tarp in the wild, consider at least the following:

Once these basic things are considered, it's time to build!

The A-frame is good for a range of weather and is very effective against rain. It's also perhaps the easiest variation for someone without that much practice. Being open at the ends (often all sides) the ventilation is superb and allows to dry items that may have gotten wet. 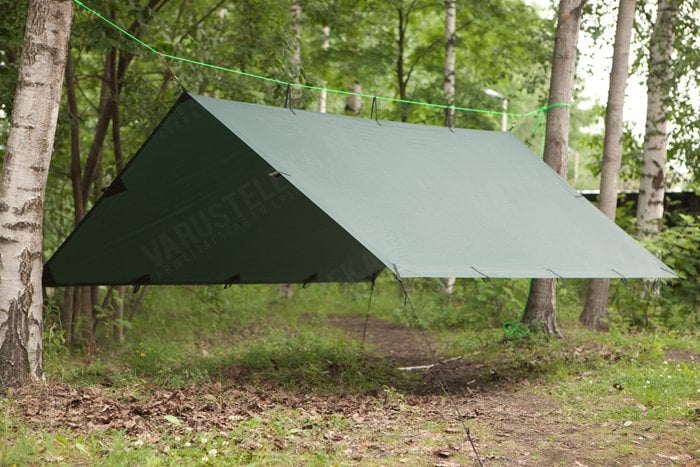 The ridge of an A-frame is made with a separate ridgeline to prevent water from running into the shelter along the line. It also allows adjusting the tarp more easily to get rid of wrinkles. The ridgeline should be taut, which places requirements on the line: Dyneema lines are strong and don't stretch, but it's too slippery for many knots, and the line is weakened considerably by knots. Paracord is easier in this regard, but it's designed (required) to stretch. Still, the most common choice is the latter as you can always tighten to compensate for stretch. If you want to go with Dyneema, consider learning how to splice. 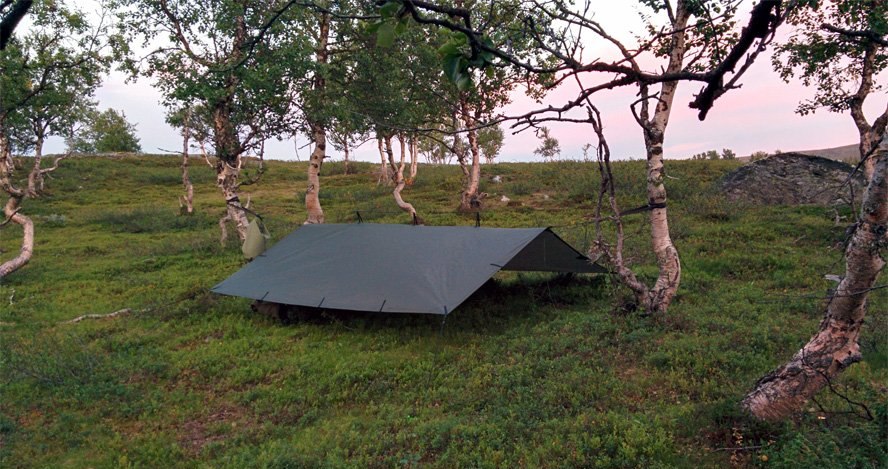 To attach the tarp to the ridgeline, Prusik loops with carabiners are an easy and effective choice. With these, you can reduce the "cow's back" of the tarp and make the sides easier to pull taut and free of wrinkles. If you go without a carabiner, you can tie a piece of Paracord to the tarp and secure the other end to the ridgeline with a taut-line hitch. 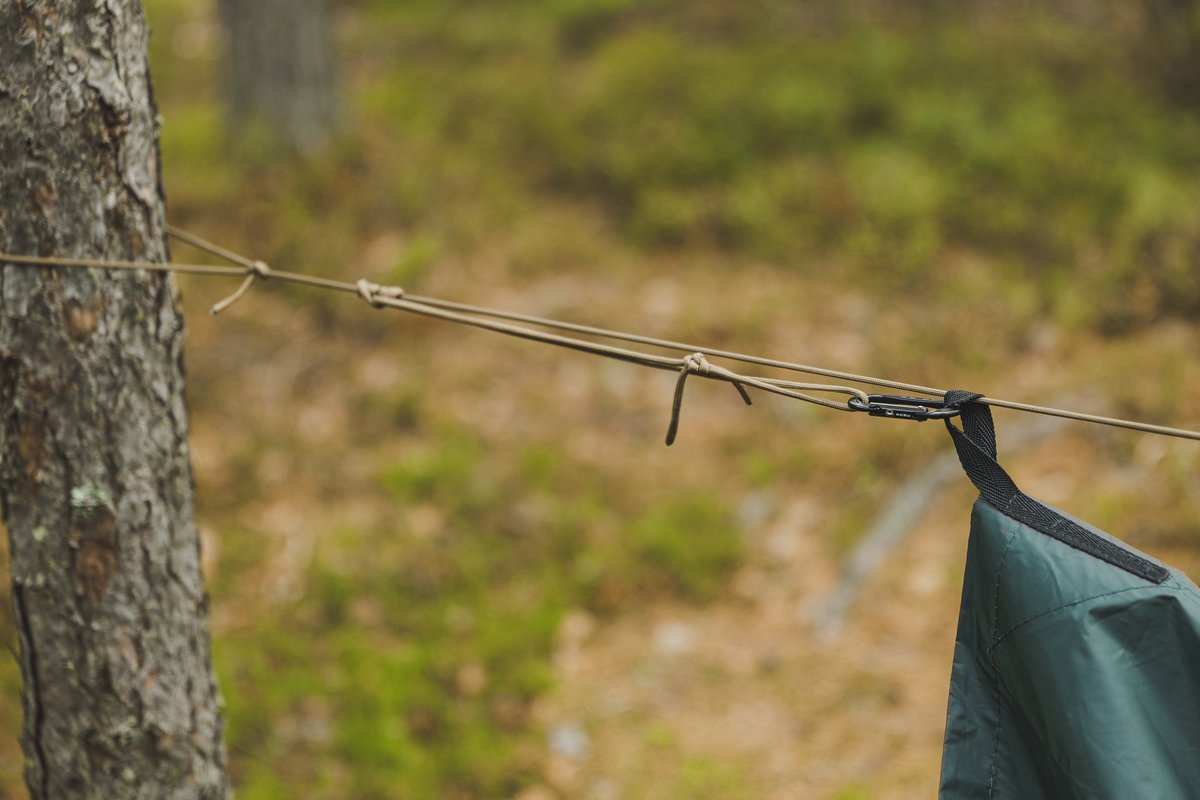 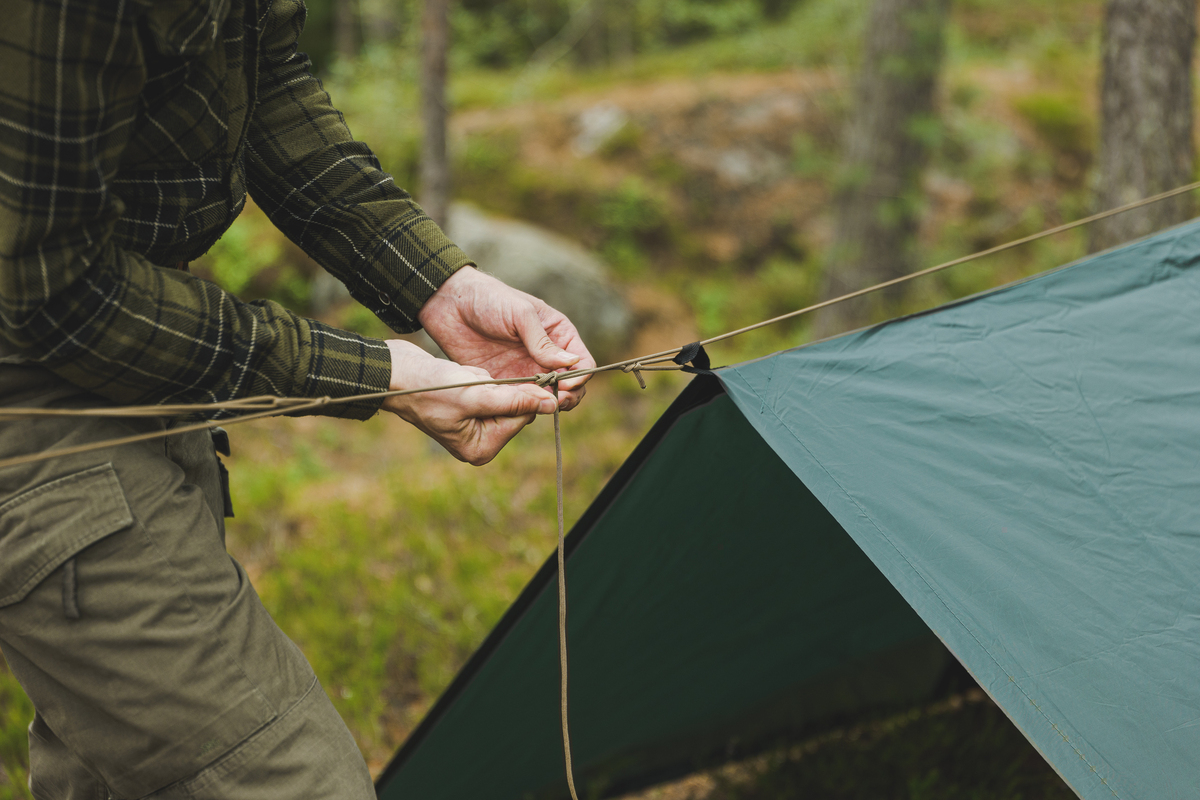 You can also tie a single line between the tarp and ridgeline.

If you like to look at the stars while counting sheep, a taco may be suitable for you. In this variation, the other side of the tarp is staked to the ground to make a groundsheet while the other side shelters from the wind. This isn't much of a rain shelter but the groundsheet keeps your gear and yourself dry, in case the ground is moist. Some people prefer to be in touch with their surroundings this way.

A higher level of protection

If the weather gets worse and showers you with crocodiles and dinosaurs instead of cats and dogs, a better shelter is a good idea. Tarps can be folded into many kinds of more enclosed shelters with or without a groundsheet. The various options are numerous like in an origami book, among the simplest is the dreadfully named Body Bag. It's like a low A-frame with one-third of the tarp as a groundsheet, the middle third as one wall, and the final third as the other wall. 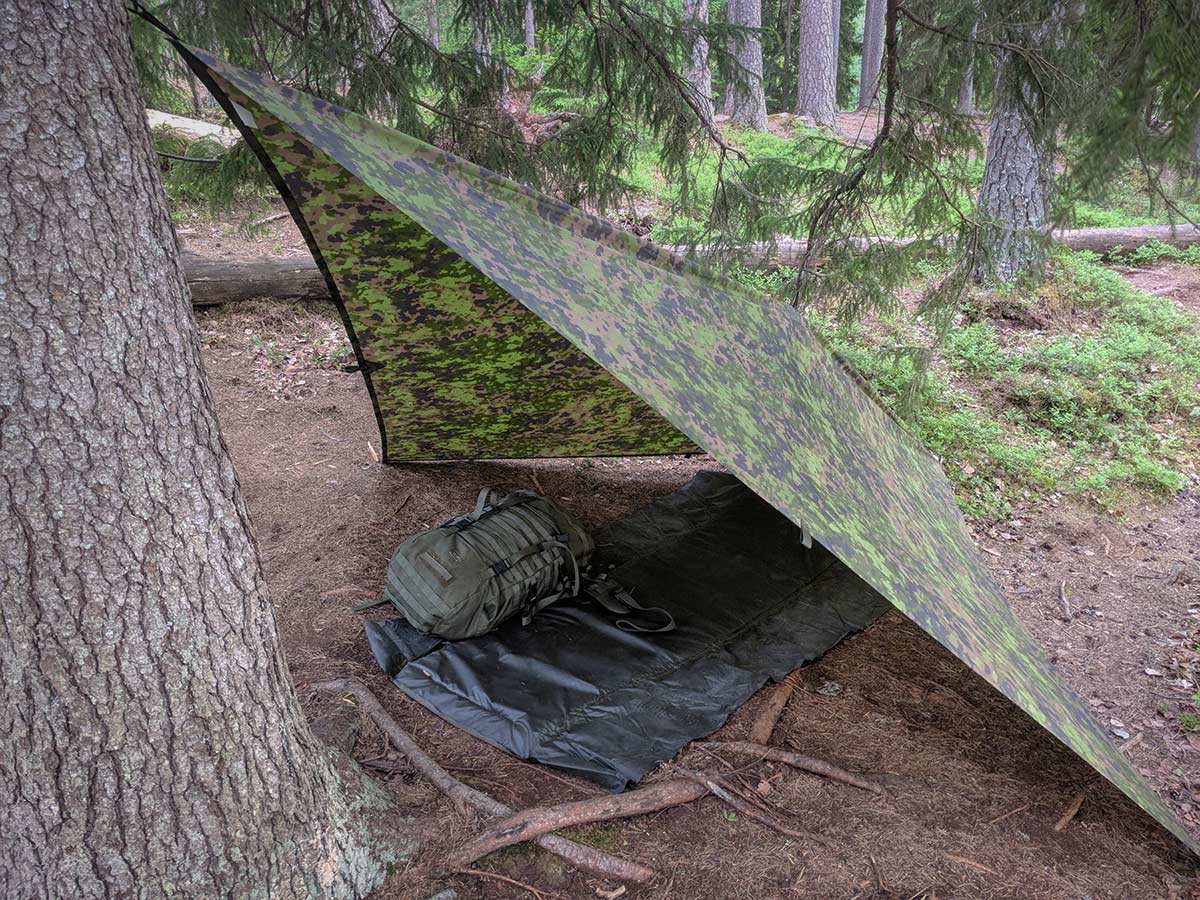 When you stake more sides to the ground, wind can't get to you.

No matter how tempting the beautiful variations are, don't go out into the wild in bad weather to see if you can make them - practice first.

As long as you pull the tarp sheet taut, you can usually enjoy a break or sleep without being bothered by rain and wind. Remember to direct the opening away from the wind, as should go without saying.

One very lightweight and effective item to bring along is a trash bag. They weigh next to nothing, are totally waterproof, and can be used as a half-bivy over the foot-end of your sleeping bag.

Knots for securing a tarp

Knots are slow to tie, difficult to remember, and tedious to undo, right? Anyone can make some overhand knots on top of each other and just cut the line with a knife when it's time to go. When reading books about knots, it may be difficult to make a choice but it's best to pick some basic knots and hone your skills with them until you're good. Since this isn't an article about knots, we won't go deeper but here are three essential tarp-related knots.

Tying a line around a tree (to begin a ridgeline), grommet, or loop: Use a Bowline knot. (the name rhymes with "Jolene" rather than "wine".) This is a common and popular knot on sailboats, easy to tie and easy to untie even after being loaded with tension. 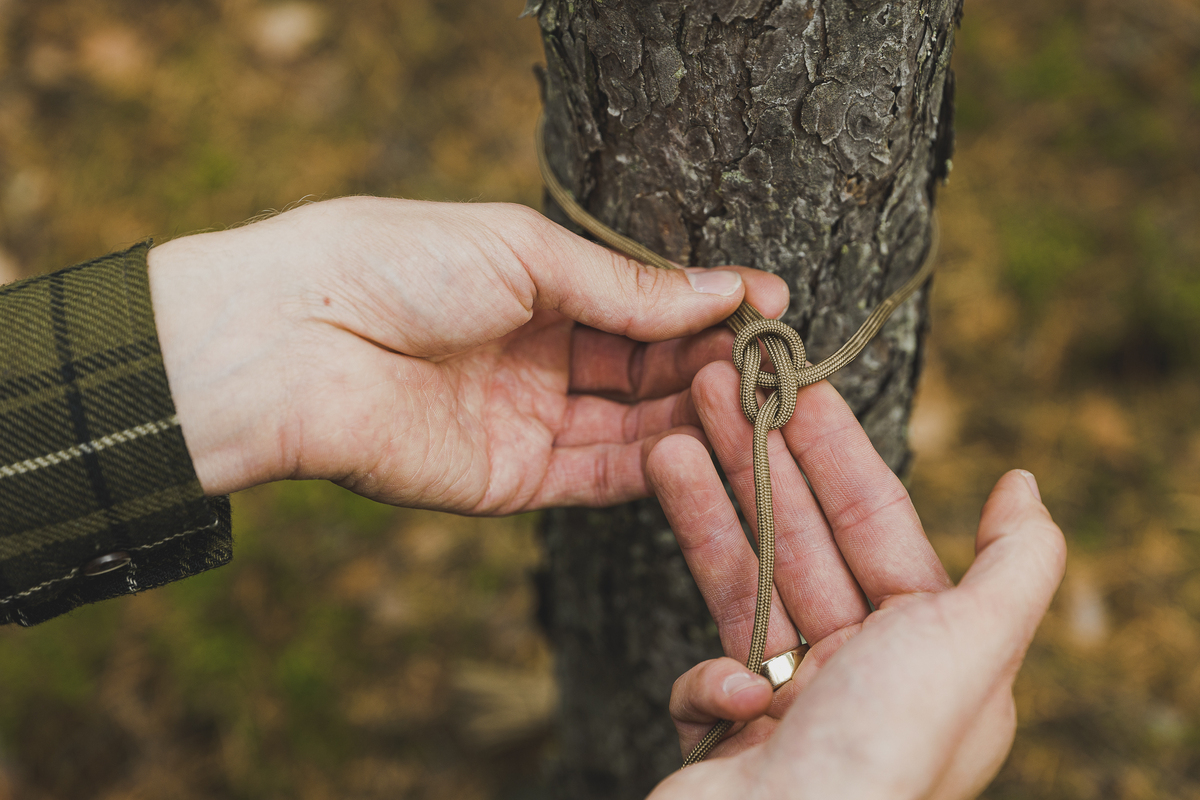 Securing the other end of the ridgeline: Use a Trucker's hitch. It's actually easier than some Norwegian pop-musicians would have you believe, allows you to pull the line really tight, and is also easy to untie.

An adjustable knot along a line, for example on guylines that go around tent stakes, or securing the tarp to the ridgeline: use a Taut Line hitch. It's quick and easy to tie, doesn't slip easily, and is quick to untie. Anyone can tie a loop but if you want to make it neat, consider a Fisherman's knot. 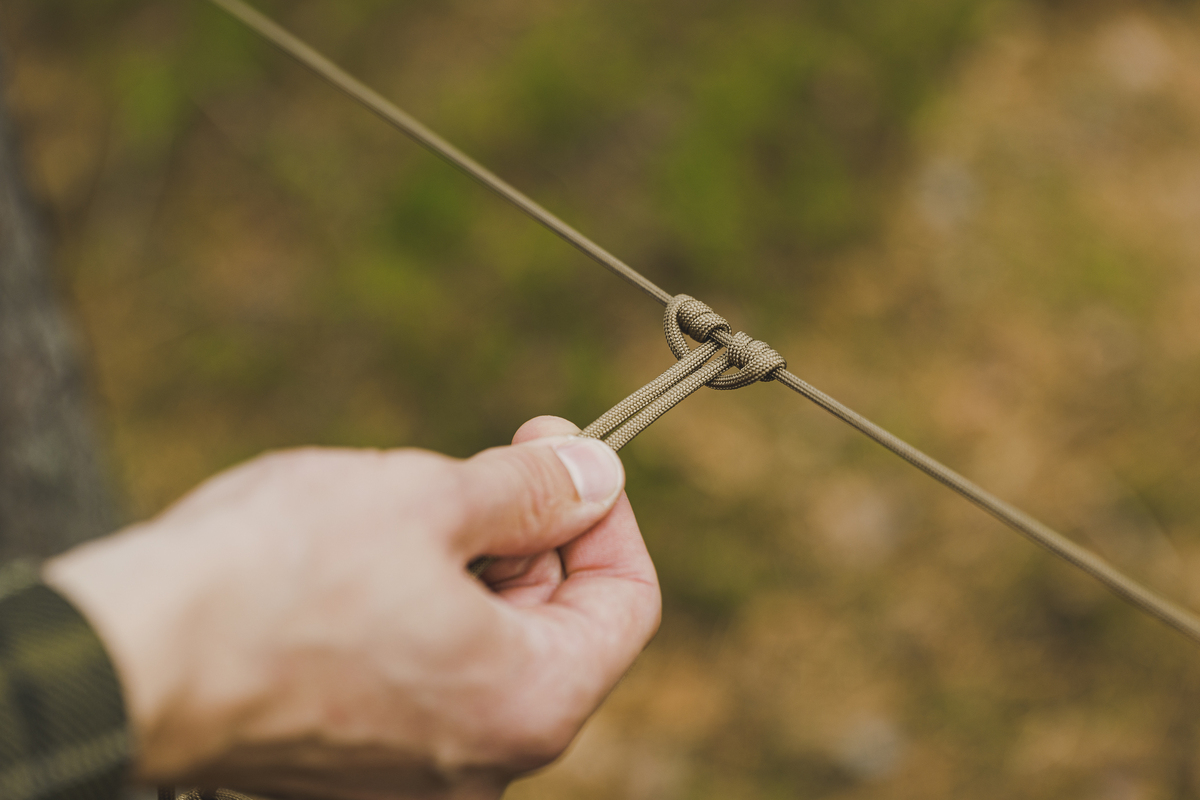 Attach the loop to the ridgeline with a Prusik knot. You can do without, but it's a nice addition.

A common mistake when learning knots is to look at an instruction video and make the knot 2-3 times until you get it right. A week later in the bush, you will have forgotten it and make the "something" knot, which may or may not hold the night, but your morning will be ruined when packing up the camp.

To really learn the knots, keep practicing until you can't get it wrong. In the comfort of your home, it's easy to forget what darkness, rainfall, and hunger do to your cognitive performance.

So carry a length of paracord with you at all times to practice knots on the bus or in any other situation where you'd normally pull out your smartphone to make yourself less smart.

As mentioned before, tarps come in many sizes and shapes. The baseline is that 2.5 x 2.5 meters is enough for one person, 3 x 3 meters is a comfortable size for some gear as well. For 2-3 persons, we suggest going for the 4 x 4 m size. Despite having an area of a small apartment flat, take into account that you'll probably build a wall or two in your tarp shelter, and perhaps some part will fold into a groundsheet. 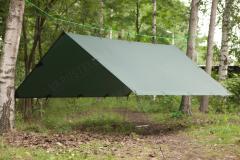 DD Hammocks 3x3 Tarp, Olive Green
54.99 USD
A bloody fantastic tarp, a bit like the British army Basha, but a tad better! Large enough for all kinds of setups, with a LOT of attachment loops. Works well on its own or over a hammock. Comes with a stuff sack, ropes, and even pegs! 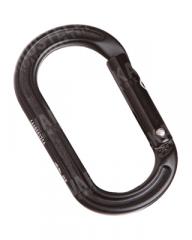 DMM XSRE carabiner
13.99 USD
An extremely strong, high-quality karabiner for just about any purpose where you'd need one: pitching a tarp, lifting and hanging gear, and so on. Made in the UK! 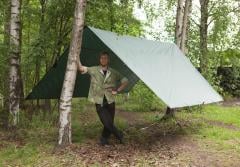 DD Hammocks 4x4 Tarp
71.99 USD
This large multifunctional tarp is great for groups or lone hikers looking for space and comfort. Large enough for all kinds of setups, with a LOT of attachment loops. Works well on its own or over a hammock. Comes with a stuffsack, ropes and even pegs! 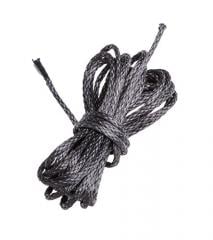 Amsteel Dyneema cord, by the meter
2.99 USD
Amsteel is a strong and very lightweight cord made from Dyneema fibers, the same stuff that bulletproof vests are made of. This stuff is fantastic for any use where you want lightweight and extreme strength, perfect for hammock ropes and other camping gear! This is the same cord DD Hammocks use to make their Whoopie Slings, tried and tested stuff.

Särmä Erakko Tarp, 2.5 x 2.5 m
39.99 USD
Our very own little tarp, made in co-operation with DD Hammocks. Erakko (for all you foreign devils that´s "hermit" in Finnish) is as the name suggests a loner tarp, designed for packability whilst still being comfortably large enough for one person to sleep under. Lightweight and packable, this is one fantastic tarp for pitching one-man shelters! 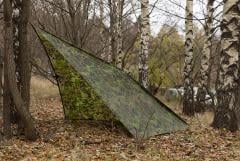 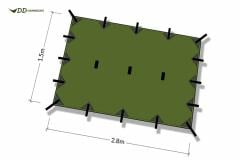 DD Hammocks SuperLight Tarp
72.99 - 117.99 USD
An incredibly lightweight range of tarps with lots of attachment loops. Works well on its own or over a hammock. There's no excuse to leave these at home, that's how small and light they pack! Each tarp comes with a stuff sack, guylines, and Superlight pegs! 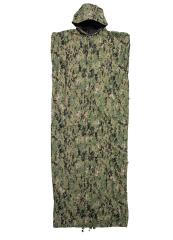 OR WallCreeper Bivy/Poncho/Shelter, AOR2, Surplus
398.99 USD
Good golly, Miss Molly! This WallCreeper is an extremely versatile one person Super Awesome Thing made of two-layer Gore-Tex. You can turn it into a bivy, rain poncho, small shelter, and a hanging shelter for climbing use. This is a bit like a US rain poncho with superpowers. Unissued military surplus, so a true gem! 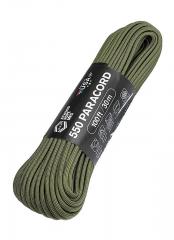 Atwood Rope 550 Paracord, 30 m / 100ft
15.99 USD
Paracord is one of the most versatile cords on the planet - and in space. With a proven track record dating back to WW2, paracord has made a well-deserved name for itself as being one of the best cords ever made. Sold in coils of 30.48 m / 100 ft.
Webshop by Lillhonga.fi