The #varustelekaroadshow 2018 has ended. This year we made 16 gigs in 13 different regions. Twelve of the jobs were market square gigs done during six consecutive weeks in spring and fall. Further, we participated in Tuska Metal Music Festival, Riihimäki International Sportsmen’s Fair, GoExpo - Sports and Outdoor Event and Hartola Fair. As far as we are concerned, it went damn well! According to our records, there were 8000 purchases combined. Based on our estimates, every other visitor bought at least a pair of socks, so we reached at least 16 000 people. One tenth of those purchases came from Tuska-festival, and you won’t guess what the most sold item was! Nope, Scho-Ka-Kola came second as Bundeswehr's Flecktarn field shirt took the first place. Now you know the dress code, in case you're in for some metal music during the summer in Finland. You’re welcome! 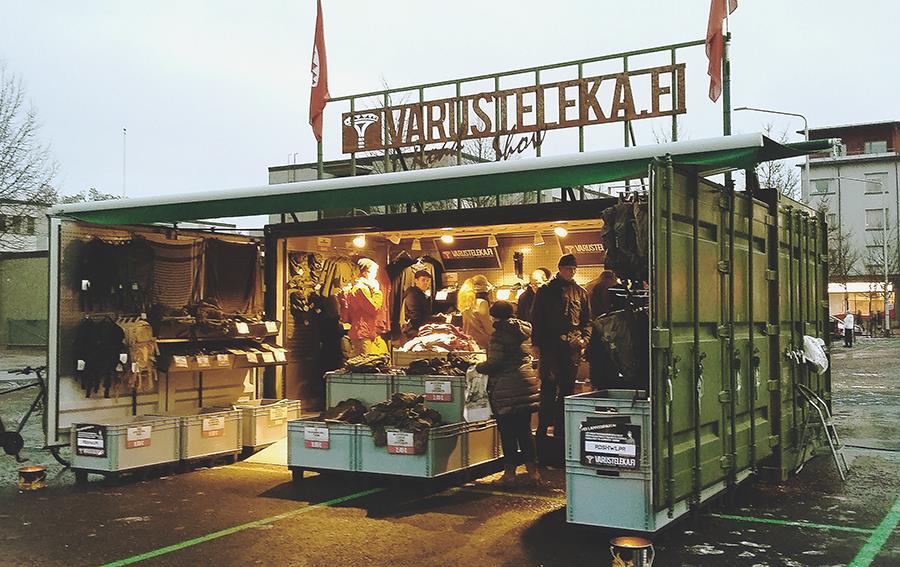 The Varusteleka Road Show is our pop-up shop that was first experimented with during Christmas 2016 in Tampere, the second-largest city in Finland. The trial went so well that the next year we decided to buy a container of our own and started touring around Finland. The concept is simple: Bring in the container, open the doors and the shop is open. Hang around for three days; sell, meet old mates and make new ones. In the third evening, close the doors and send the container towards the next Road Show city!

The Road Show aims to bring the gospel of Varusteleka where the sound of our cathedral's bells won’t reach. We’re on display, looking good and demonstrate why some people are prepared to travel hundreds of miles to buy a case of beer from us when we open a bar in the store. In reciprocity, it’s our turn to get on the road.

Well, it’s not just for the visibility. If it was, there are plenty of billboards we could buy ad space from, or erect our own. The container shop combines the best qualities of e-commerce and brick and mortar: close distance, excellent customer service and a large selection. There are some products that you can purchase right away, or order anything from the rest of the product range of Varusteleka without shipping costs. We’ve noticed during the years, that people want to fit and fiddle about their hoodies before buying them. The container solves this as we bring fitting samples of our hottest products which you can try on, pick your favourite colour and order straight to home. Rather handy and convenient! 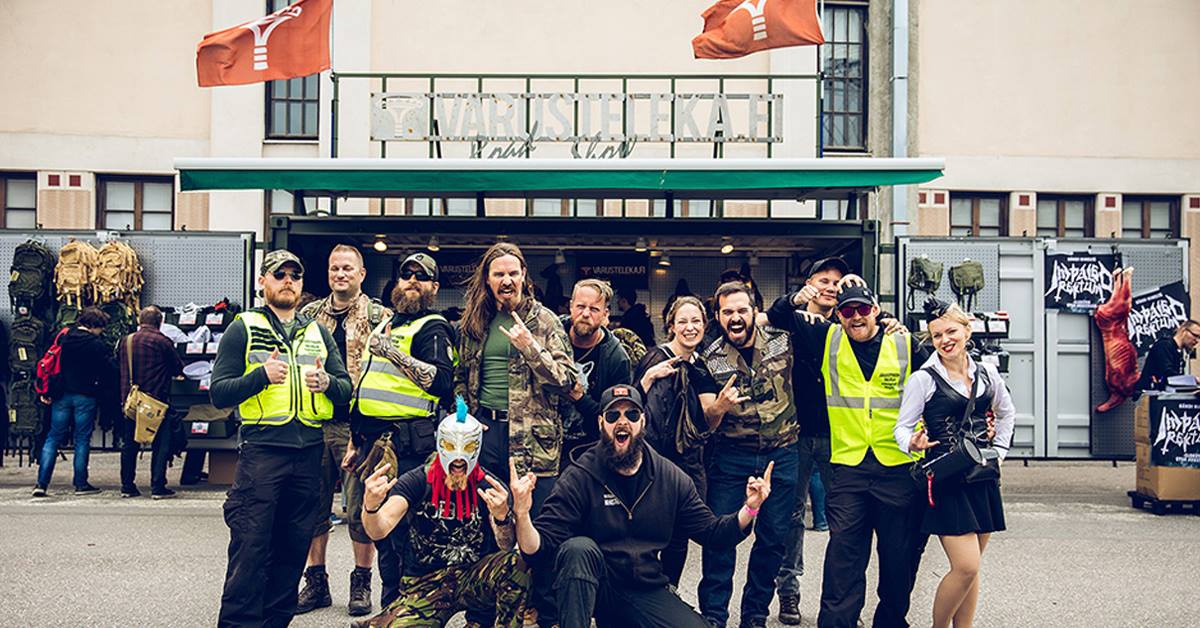 We ponder over the turn of the year if we’re going to go on tours, and where should we go. The year 2018 made around 3000€ profit, so it’s not an exercise in futility for us. After visiting the provinces, the local neighbourhoods have started to look like they are in dire need for some Särmä. Maybe we should take the old Finnish idiom to the test: Not worth it to go further than the sea to fish. Time will tell.

Here are some thoughts of a sweet man with a moustache also known as "Aleksi The Container Strider," who participated in half a dozen of our container jobs:

"I got interested in the Road Show right from the start. In my opinion, it’s pretty cool that we have a way to bring Varusteleka to the customers to whom visiting the store isn’t viable. At the same time, the Road Show gives me the possibility to visit places I’ve never been to before."

"The year’s best Road Show was by far at the Tuska-festival. A lot of happy, intoxicated people enjoying some metal music and social interaction. Plenty of good and bad jokes were cracked, and I got to watch as Europe played the Final Countdown, sitting on top of the container. That’s a six out of five right there!"

"In my fantasies, containers are flown in with NH90 transport choppers to all corners of the world. The container doors are flung out accompanied by fireworks and a live performance by Iron Maiden while thousands of pilgrims are flocking the shop in Mad Max-style making purchases like there’s no tomorrow!"

During the fall's #varustelekaroadshow a hilarious Bucket Challenge came into being, where local city official brought us an "official" bucket of the city. In case you’re wondering why such a thing as an official bucket of the city even exists, don’t bother: It’s a Finnish thing. The challenge was spontaneous; Kouvola’s city officials brought us a bucket for reasons beyond our understanding. We buzzed about it so much in social media that the city officials of Hämeenlinna also brought us a bucket. After that, we had no choice but to issue a challenge for the rest of the cities as well, and they delivered. Even Kuopio, who missed us during the Road Show, saw the effort to send it to us afterwards! But Tampere, the birthplace of the whole show was a no-show. Oh dog, what doned! We even made the second best sales there, so the city has love for us, but we have to consider if Tampere is worth the effort in the future. We're people of principle after all!