The army and outdoor industry have a calendar of their own. The year doesn't start from 1st January, but the real kick-off to a new year is Shot Show. Because we are in tune with this rhythm, we packed our bags once again and headed to Las Vegas to further our cause: Total World Domination.

The travel schedule covered the following main events: Army Navy Military Expo for surplus and Shot Show as the biggest and baddest. From these we moved on to Gunsite Academy and finally as the icing on the cake, Desert Brutality 2019 by InRangeTV, supported by us.

If the price is right, I buy all of this

We got a good start at Army Navy Military Expo or just ANME. Basically the US armed forces and various agents gather to wholesale surplus. We've been there a couple of years before and the principal lesson is that if you want the good shit, you have to hit the show floor early - preferably before the official opening hours. Put on your buying pants and go shopping!

This year a shadow was cast over the experience because of global politics: the tariffs in place due to trade struggles between the US and EU meant we weren't looking at clothing at all. With all the import duties and taxes paid it wouldn't be a sensible business at all.

We wouldn't let this bring us down and shifted our focus to equipment. Dealers we knew from previous years had dug up a fair amount of interesting gear from the depths of storages and we spent the cost of two premium cars in just two hours. Our shopping cart was filled with a selection of modern combat gloves, cutters, ballistic eyewear, knee pads, backpacks, mag pouches, tents and most importantly of all: Woobies!

The ANME doesn't cease to amaze how much NIB or near-mint things various branches discard. Most things we bought were in factory wrappings or very lightly used.

At the time of writing this a sea container with our stuff is sailing towards Europe and they will be available for sale during April. Keep your eyes peeled and hit F5 on our front page! The size of Shot Show is still hard to comprehend. Here's a few numeric facts about the event:

So it's a party. If you'd visit every booth during four days, you'd have an average of 22 seconds to spend at each one. The whole shebang isn't limited to the expo of course, but various side events, range days and parties expand it to a ridiculous scale.

Practically everyone who does anything in the industry is there: manufacturers, wholesale dealers, retailers, armed forces from various countries and other fake-moustache guys, private military contractors, media, Instagram Sheepdogs, actual Sheepdogs and so on. Dive in!

Our priorities were to meet old friends, keep supplier contacts fresh and start new co-ops. Of course a chunk of our time was reserved to bounce around and sniff new trends.

No mind-blowing novelties were seen. The slightly older trend of lighter manufacturing processes and materials is now manifesting itself as viable products on a larger scale. This often means laminated fabrics that can be laser-cut, and products made with these techniques.

Another trend we see is a switch from modularity to quick modularity, such as easy inserting or removal of hard plates to/from your carrier and various clips to attach pouches without the hassle of weaving MOLLE. Some of these were good innovations while others didn't strike us as very practical applications.

During Shot Show our central goal was

hosting our own party, where we assembled a bunch of good folks. You can spot familiar characters from Primary & Secondary, InRange TV, Polenar Tactical, IMTT and so on from our pictures. Oh, and Rudy Reyes arrived to raise the roof as he does - sometimes literally! We didn't spend the whole evening just eating tacos and drinking beer; we presented a selection of our own products for guests to look and touch. Especially our knives and winter clothing drew fascination, as you would expect from a Finnish company.

Some years ago we stumbled across Leathernecks Bar and joined the Recon & Sniper Foundation party. It has become a tradition by now and this year was no exception. It's a fundraiser for the Recon and Scout Sniper community, they are committed to important work and we supported their raffle table with Finnish design: The Terävä Skrama and Särmä TST RP80 rucksack.

Shot Show is a mission that drains you. The days start early and come to an end late. There's a constant hasty feeling whether or not you actually are in a hurry. At some point you go numb to the sheer amount of people and stuff. That said, it's a good experience and boosts business. We were especially delighted to meet so many people who already knew us. These encounters and getting feedback from actual end-users were surefire ways to bring us to smile. Total World Domination is proceeding!

We visited Gunsite last year as tourists. This time we went ahead with a previous pact: two days of training and getting to know the selection of Gunsite.

Gunsite is a legendary place founded by Lt. Col Jeff Cooper in 1976. Cooper is considered to be a founding father of modern handgun techniques and training and Gunsite is to our knowledge the oldest private school in the business of shooting and weapons manipulation in the United States.

Being used to Finnish shooting ranges Gunsite is a damn Disneyland of shooting. There are plenty of different ranges like a Shoot House, Scrambler, short and long ranges and everything in between. With the help of IMTT and Gunsite we got a tasting of the various courses available. First we warmed up on a regular range and then moved on to more dynamic exercises on ranges with more natural environments. Finally we did some TRA in the Shoot House.

Despite keeping up a pace, the training was very high quality and taught us new things. Especially moving on natural ground and through houses was an eye-opener to how much more difficult things get when you step out of a flat range-floor with targets at the end of the bay. Very good preparation for Desert Brutality among other things. If you live a pew-pew life, we warmly recommend Gunsite Academy.

Over the hills and far away…

The next stop was a factory visit to Arbor Arms. Because our crew walks their own paths, we took a detour on 89A over Woodchute mountain. The scenes were epic and we saw some snow - at the same time we got word from Finland that the amount of snowfall was causing chaos back home.

We first met Arbor Arms last years and were thoroughly impressed with their gear. They are veterans which is always a bonus and generally good guys. But this isn't all! Nick, one of the founders, is a culinarist and a passionate cook. For a few days we talked about materials, manufacturing processes and gear. Of course we went shooting and ate really well. Despite being in a competitive business, it feels good to hang out with other companies and share information and experience, which may prove to help everyone in the future. 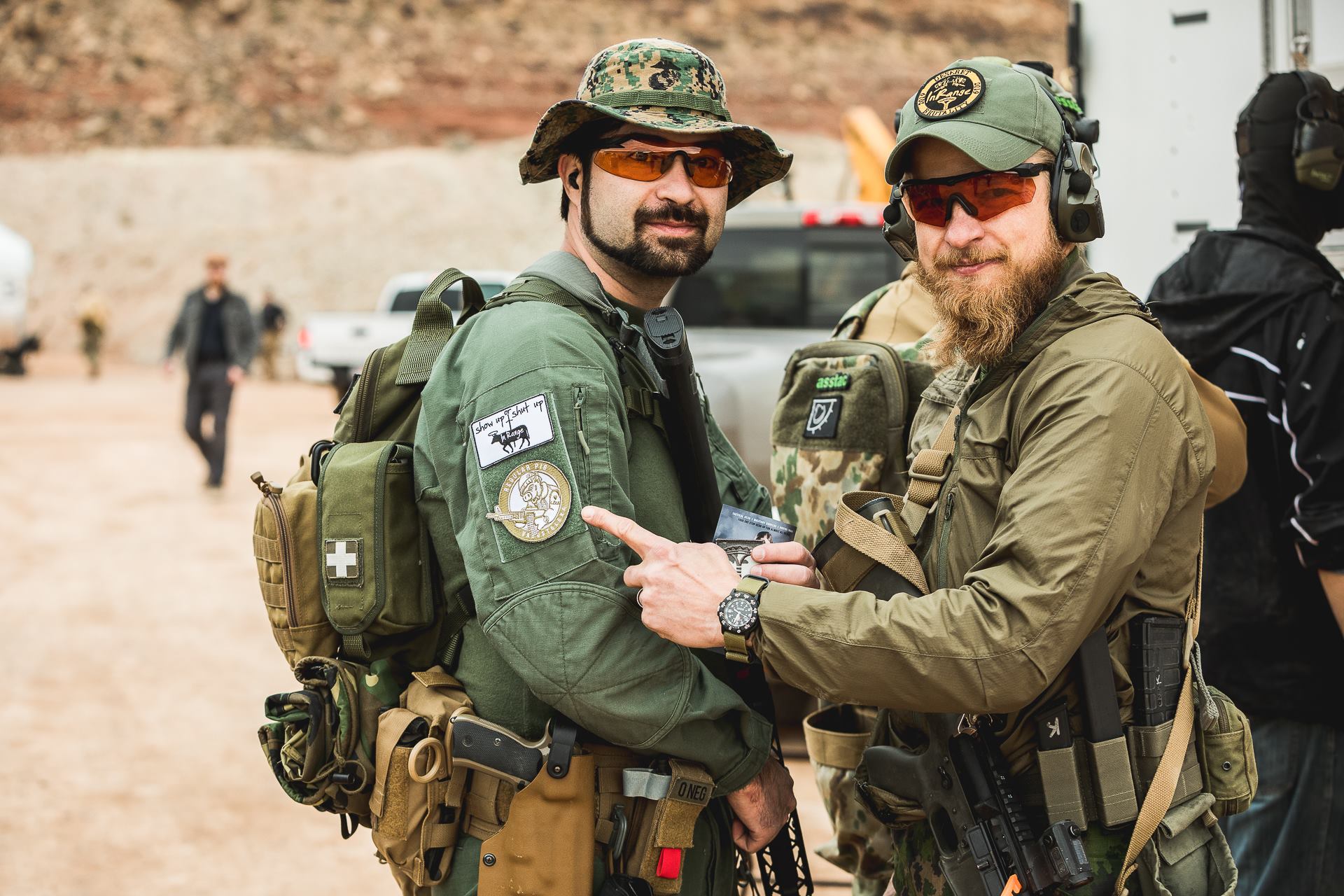 Now what? Last year we were fried in Arizona and spent the following year dry-practicing in the sauna. This time Desert Brutality was in the desert as should, but the temperature was just slightly above freezing with some occasional rainfall. Oh well, felt like a regular Finnish summer so the conditions worked to our advantage.

The match was as expected from Brutality series: eight stages that required shooting skills, fitness, a sharp brain and resilience to stress. The overall time is what sets shooters apart and any mistakes are heavily penalized with 60 seconds per infraction. Don't fuck it up! Our patrol was shooting in the category of kings: Armored P+, which is similar to what we do in Finland in dynamic reservist shooting: plates and helmet on, all the gear on you at all times and so on. We placed 10th, 13th and 19th of 24 participants in the category (35, 70 and 138 of 171 overall). Not too bad with loaned guns and equipment, but we have to say the speed and precision of the top shooters were simply amazing.

Last year when Rudy was our guest he shot the Finnish Brutality. We agreed then that we'd meet again in Desert Brutality and so we did. Rudy and Paul, both Recon Marines, participated in the match as well. The energy and positivity of Rudy is something we can't mention often enough: he's thoughtful of fans and fellow competitors even if he's next in line or just finished a grueling stage.

The Brutality matches are nice events in the literal meaning of the word. It barely feels like a competition with others cheering you instead of gaming the match and others all the time. The priorities are safety, having fun and learning. As before, we were glad to meet our customers who were represented in match participants in big numbers.

All good must come to an end and it was time to say goodbye to friends and the land of the free. The trip was good and the lessons we learned and possibilities we discovered are pushed forward with a whole new momentum. A big thanks to all old and new friends for the good moments, support and hospitality. See you next year!