Hunting moose in Pomokaira in Lapland

Moose hunts on state land in northern Finland offer wilderness adventures for tens of thousands of Finnish hunters every year. We also gathered a group of friends and traveled to Lapland, dreaming of catching the two moose for which we had permits in the Pomo-Vuotso region.

In Finland, moose is the most important game animal when you look at the amount of meat acquired. It is usually a team effort and most moose are hunted in hunting clubs. However, the state also offers a possibility for people who don’t belong to hunting clubs to experience moose hunting on state land.

The early morning was shrouded in mist. Time seemed to stand still in the foggy landscape, and it was completely quiet. We got up very early so that we would have as many daylight hours as possible since it gets dark very early here at this time of the year. After making some coffee, preparing some snacks, and making sure all the equipment was in order, we headed out into the wilderness to look for the moose. 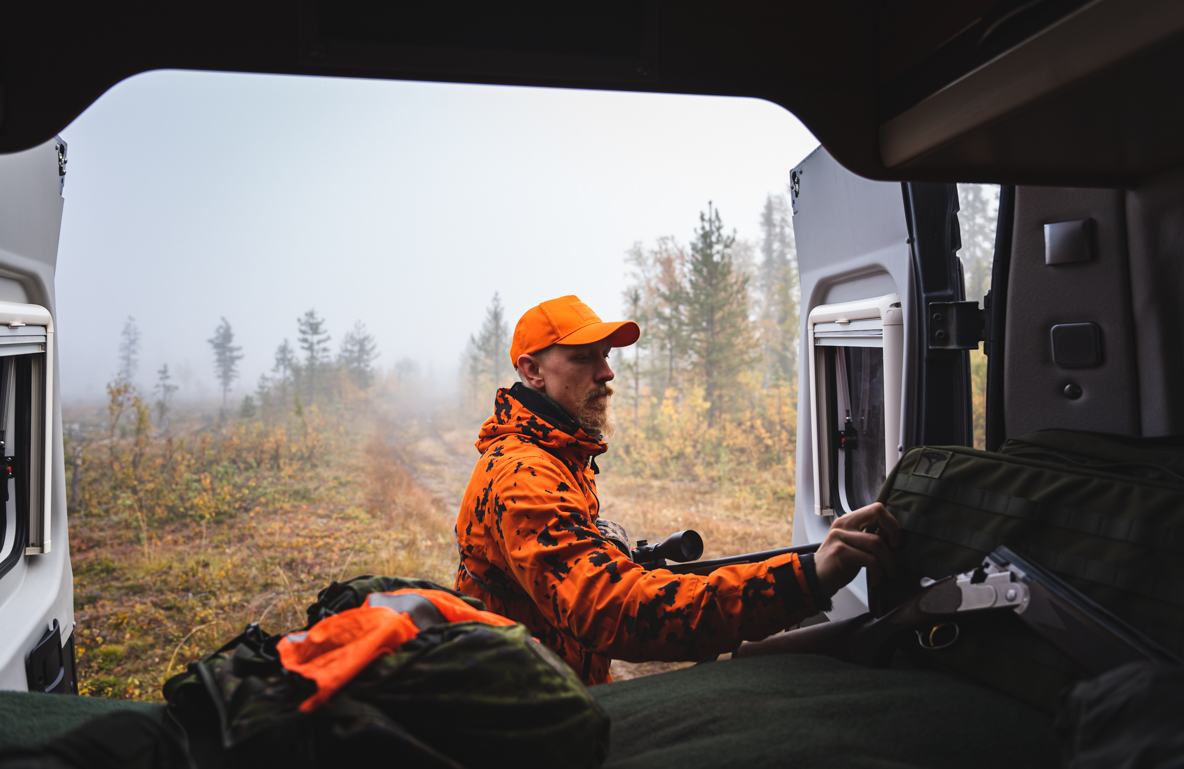 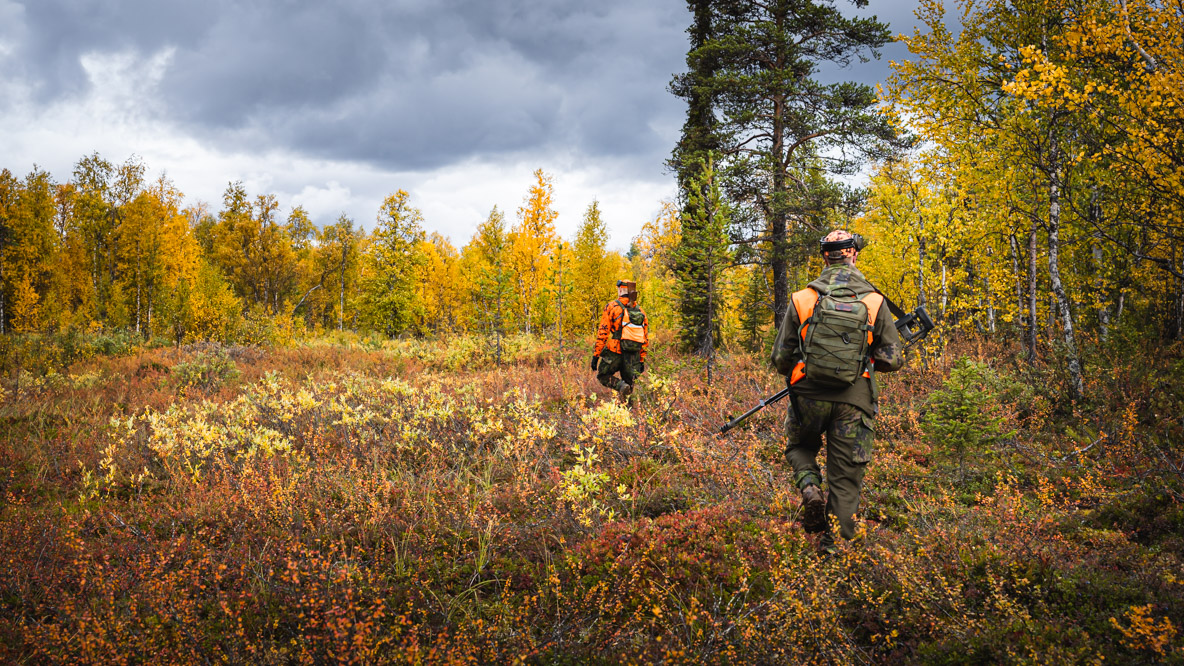 We did manage to see a moose calf on the first day. He was staring and mooning at us on the other side of a bog but we couldn’t get close enough before he was gone. However, even a glimpse of a moose was a small triumph because a couple of years ago the same area was quite empty. We spent most of the day trying to circle in front of the animal but we didn’t see him anymore. 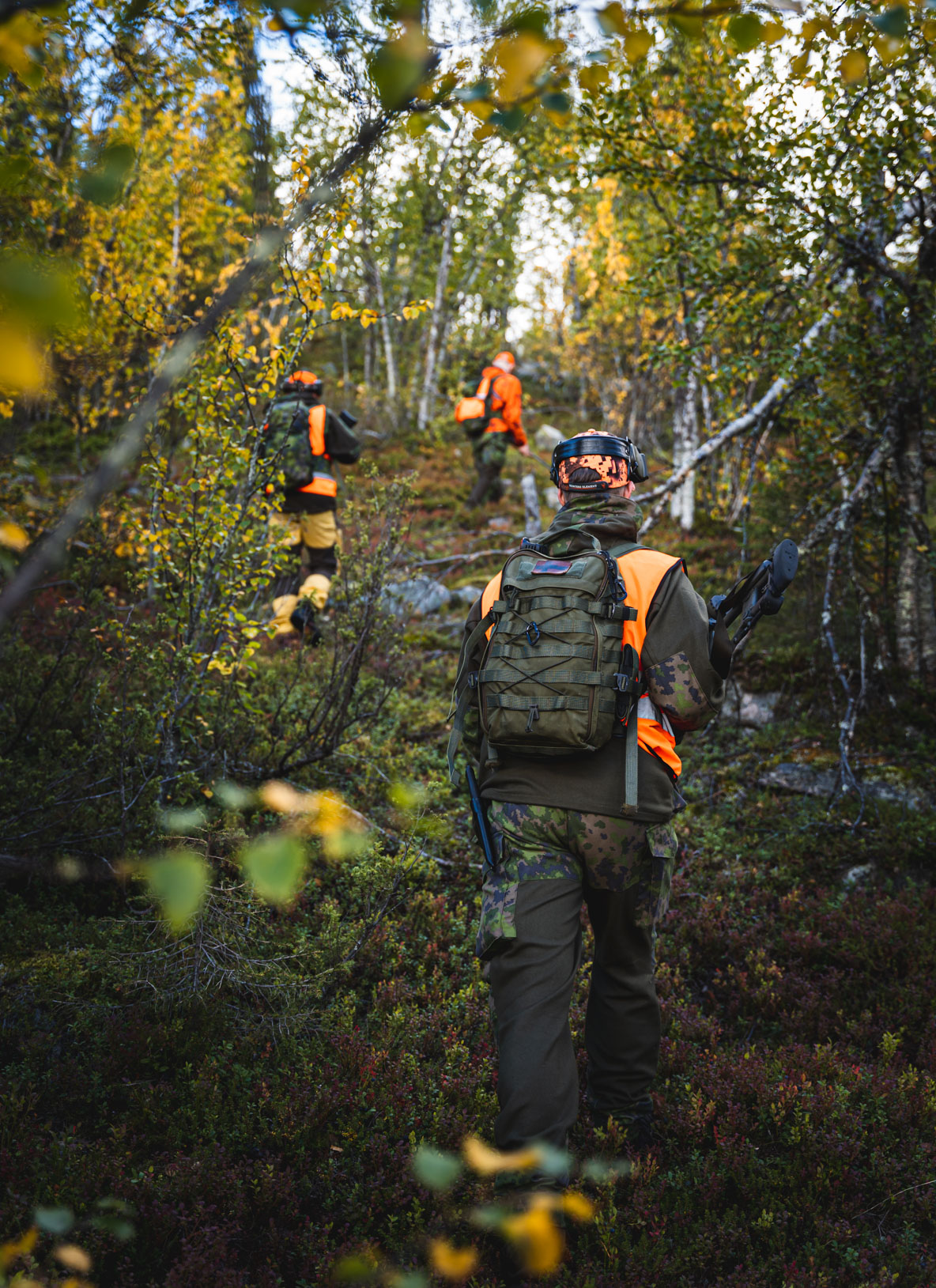 We spent the next few days searching for the moose from the secluded bogs and forests. These days were spent hunting without a dog, which made things a lot more challenging. Moose hunting, like hunting in general is not a walk in the park in Finland. A moose hunt without a dog in the proper wilderness is especially tricky. You will spend lots of days walking in the forests and wading in swamps without seeing any moose.

We even tried to climb on a rocky hill in hopes of spotting a moose with binoculars. It was a steep hill, with lots of loose rocks, which required some extra care. It was sunny but windy at the top. We spend a while trying to catch a moose with binoculars but were unsuccessful. However, the view was breathtaking and it had a soothing effect. Eventually, we had to head back down and figure out a new plan.

One of the best things about these wilderness adventures is sitting by the campfire with friends. After a short break with some food and nice company, you feel invigorated and can continue again. 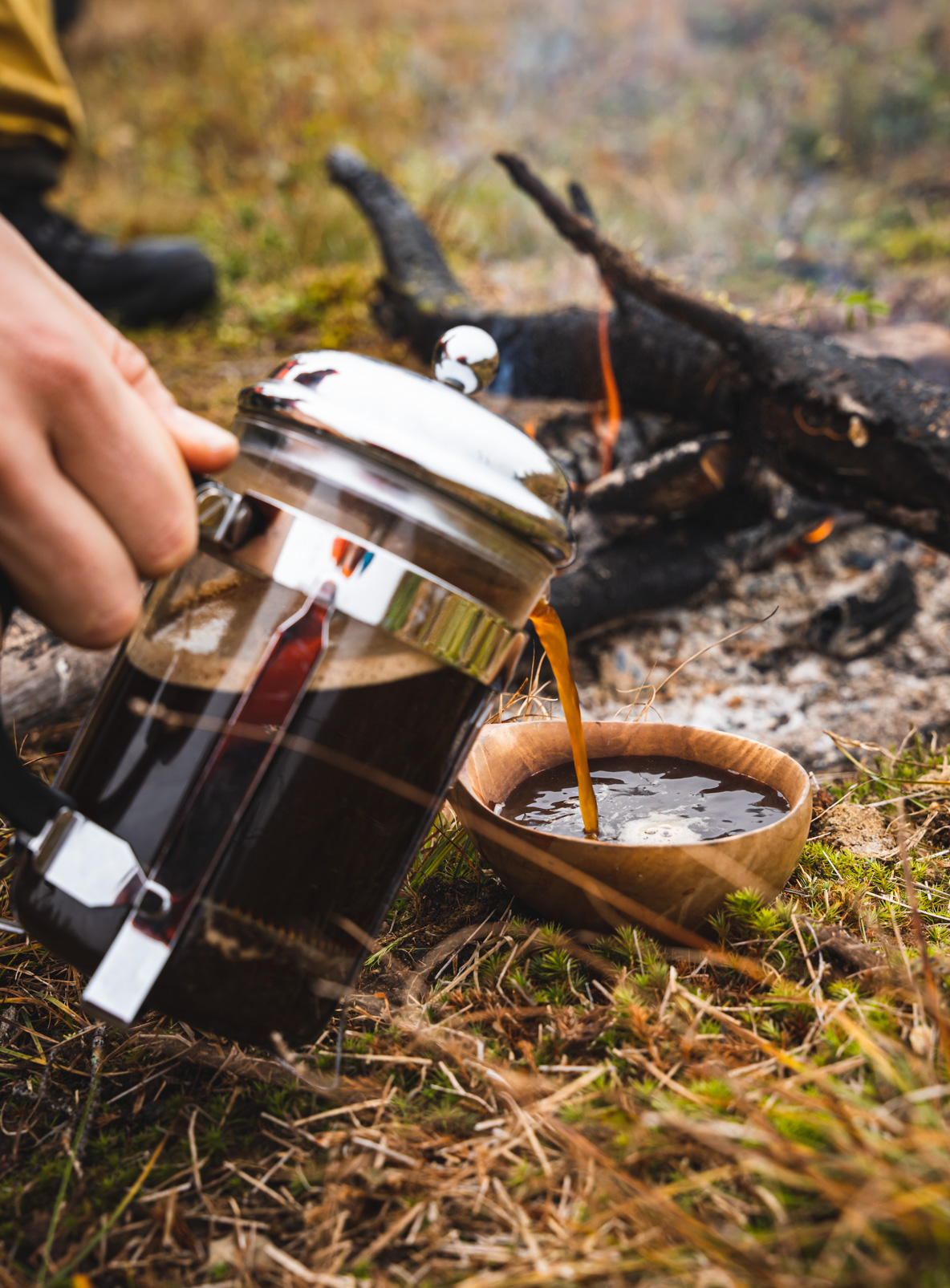 The first half of the trip yielded no moose. We had a couple of sightings but nothing close enough for a clear shot. Some of the friends headed home and some more came along. We were also joined by a local hunter Samuli and his Karelian bear dog Rokka. 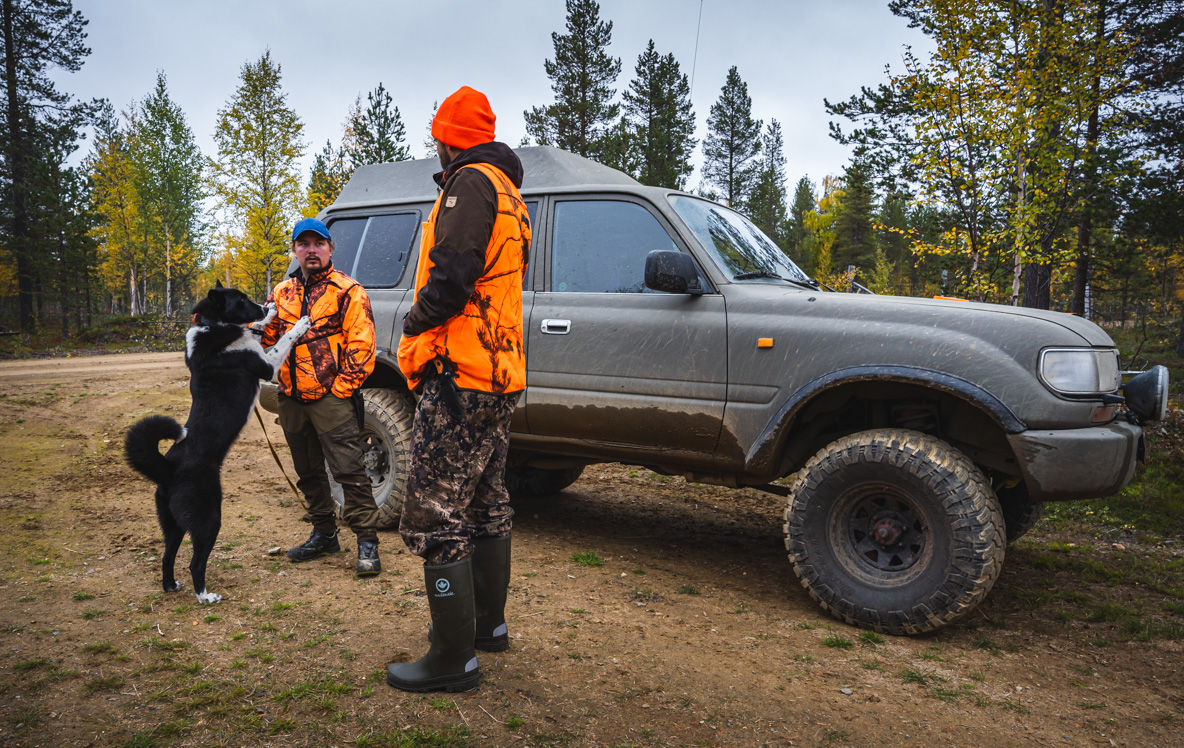 We headed out early around 5.30. The moose are active around dusk and dawn, so their tracks are also at their freshest then. The dog had a GPS collar so that one can follow the dog on a map. This helps the hunters locate the moose but also helps keep the dog safe. With the collar on, Rokka headed out to the wilderness, following a trail of some sort. In Finland it is very common to use a spitz-type dog for moose hunting. When the dog finds the moose, it tries to stop it and keep it in place by barking at it. When the moose concentrates on the dog, the hunter tries to sneak close enough to shoot.

We followed Rokka on the map and sat by a fire. He searched through an area and returned to the road. Then we took him to another location and continued this way. Finally, Rokka found a moose cow and a calf and managed to stop them by barking. However, they never stayed for very long and kept moving further, Finally, they ended up outside the hunting area. 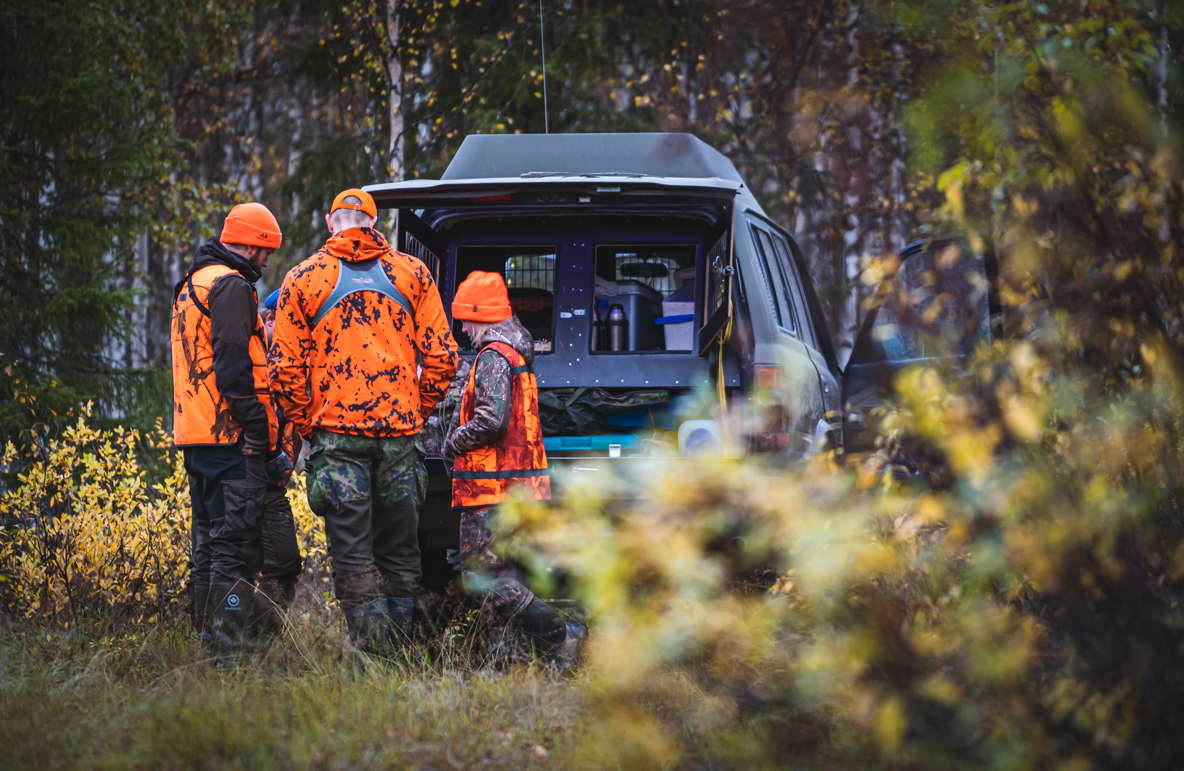 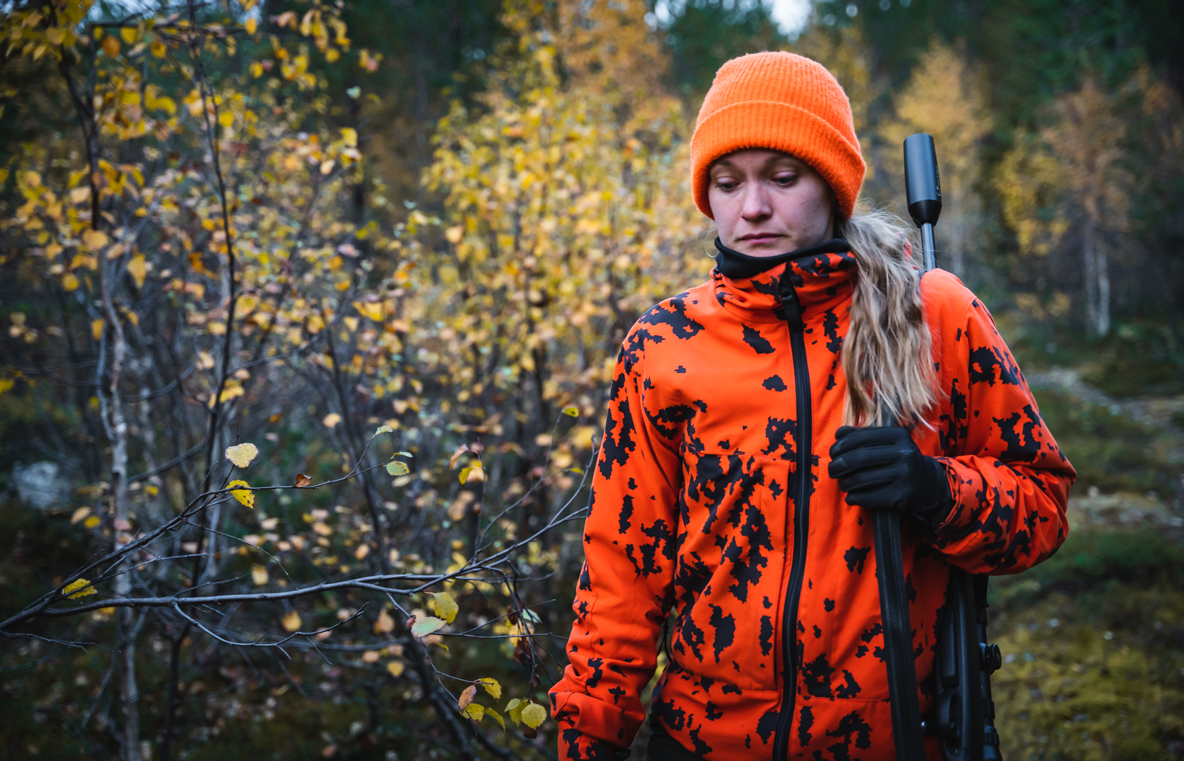 We hunted with a dog for two days but without catching anything. During the second day, it was noticeable that Rokka was also a bit tired. He started returning to use more frequently and eventually we stopped the hunt a bit earlier than the day before. 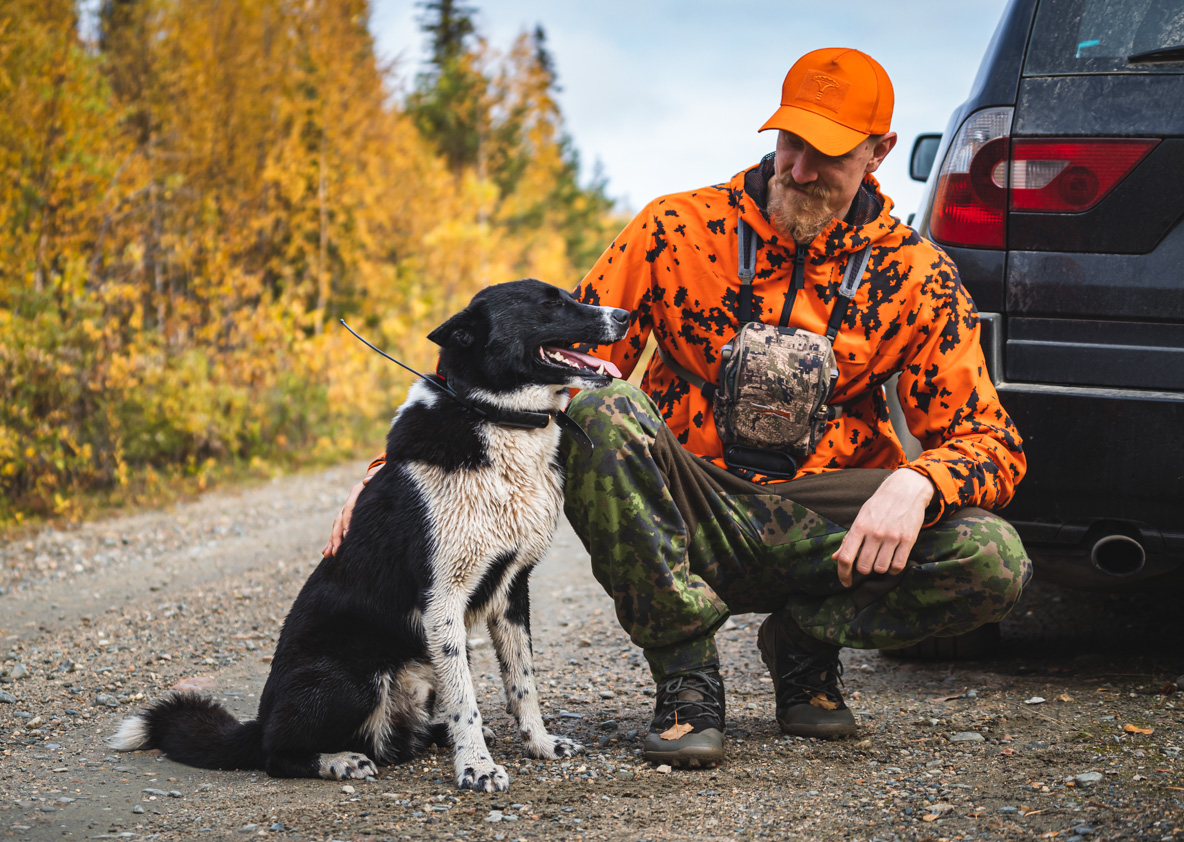 After a rough weekend, Rokka had earned some extra belly rubs. Dogs are very important members of the hunting group and using dogs is often essential, especially in larger forests.

Samuli and Rokka couldn’t help us during the last part of the trip so we continued with attempting to cal the moose to us. The rut was on and it is possible to call a moose bull by mimicking the sound of a cow. However, moose calling wasn’t that successful either. We did manage to call one moose bull but he didn’t come close enough, and quickly he disappeared in the forest as eerily as he had arrived. 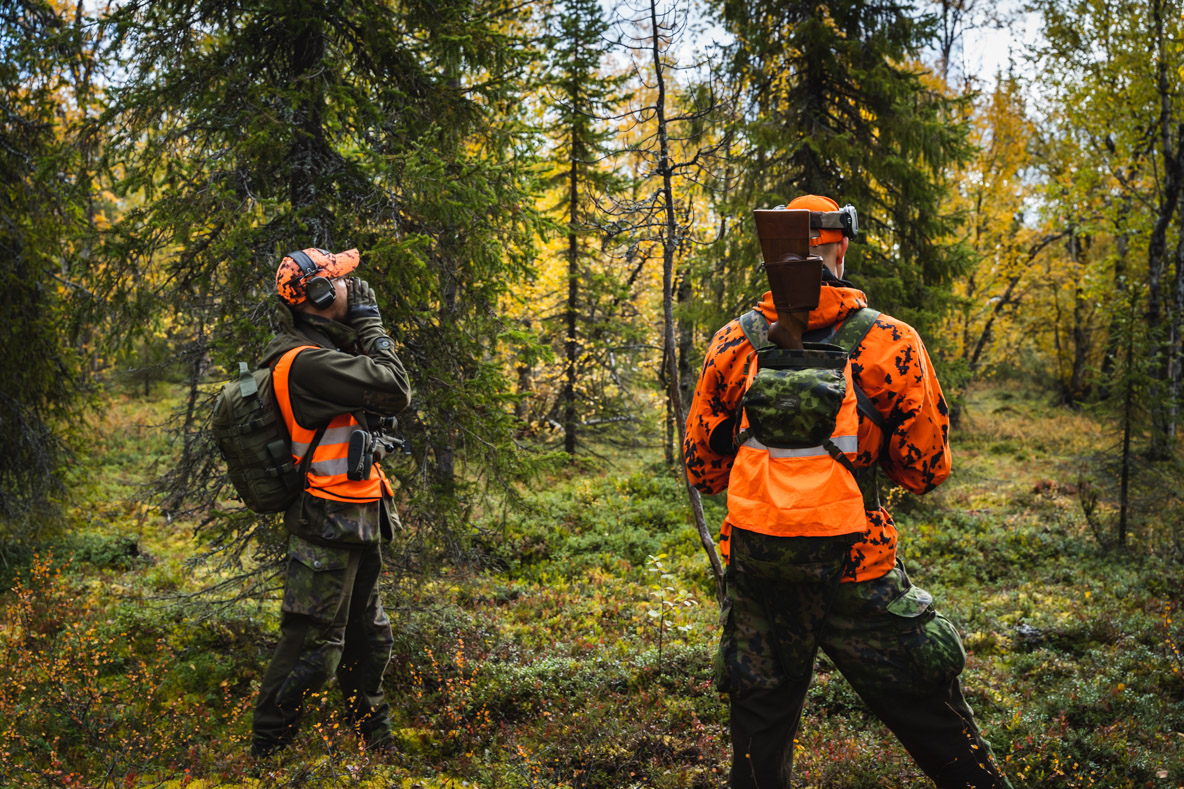 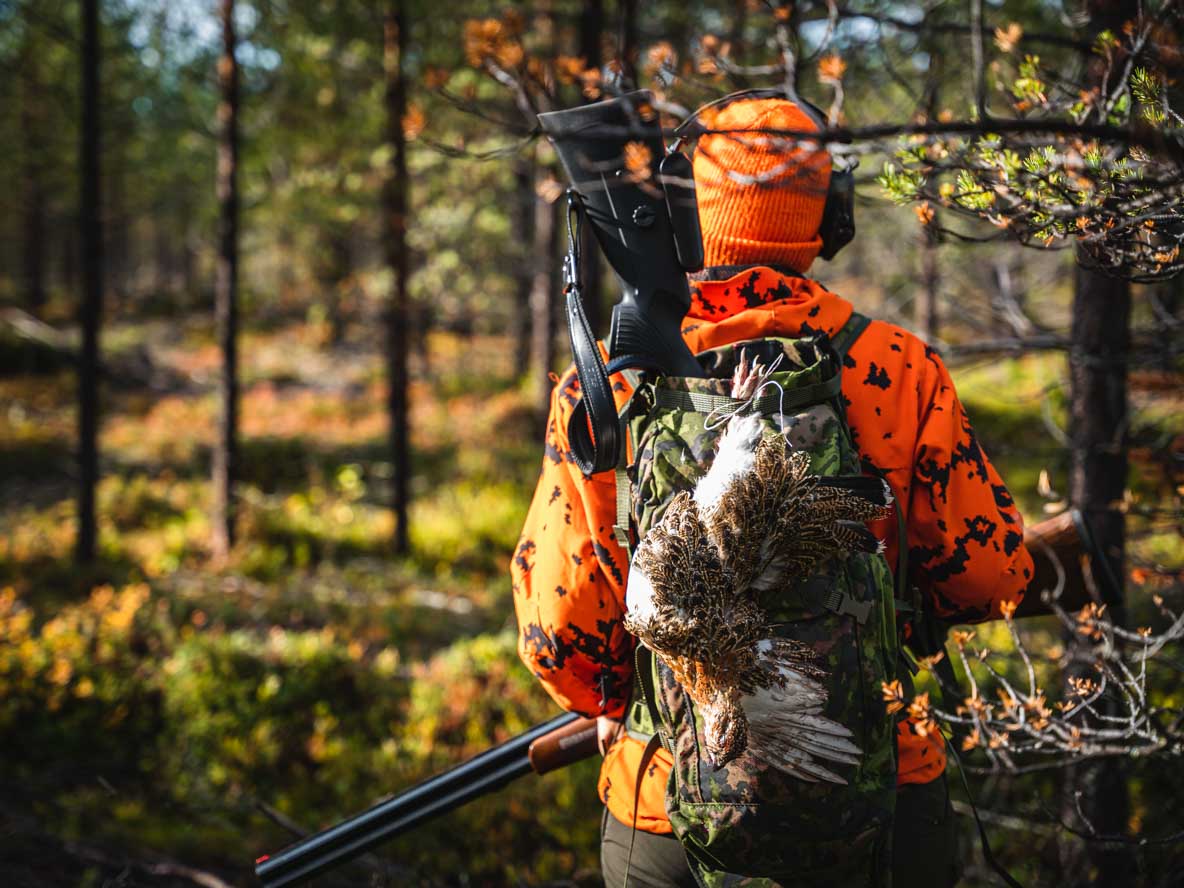 We utilized as much of the birds as possible. We fried the gizzard, heart, liver, and the breast filets on a cast iron pan and cooked the legs slowly in a pot.

In the end, we got loads of fantastic memories and wonderful moments in the wilderness with friends. Even though we didn’t catch any moose, we did manage to cook some black grouse and willow grouse on the campfire. Awesome ending to a great hunting trip in the north. 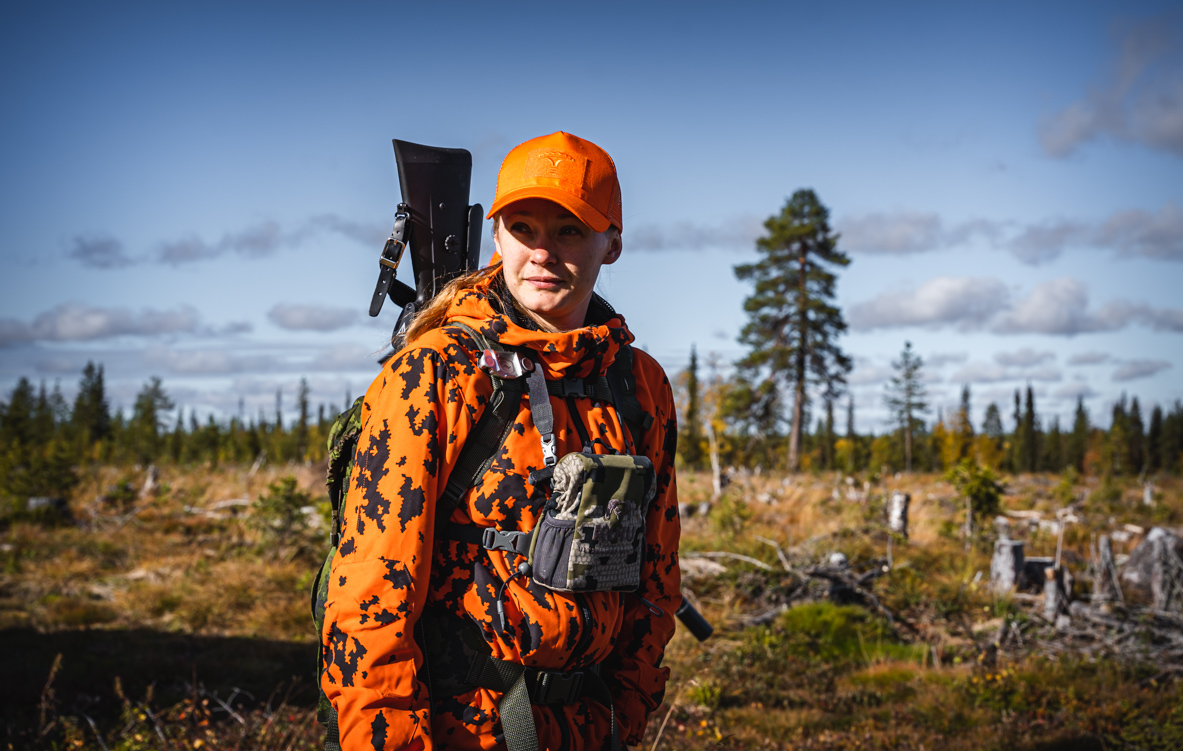 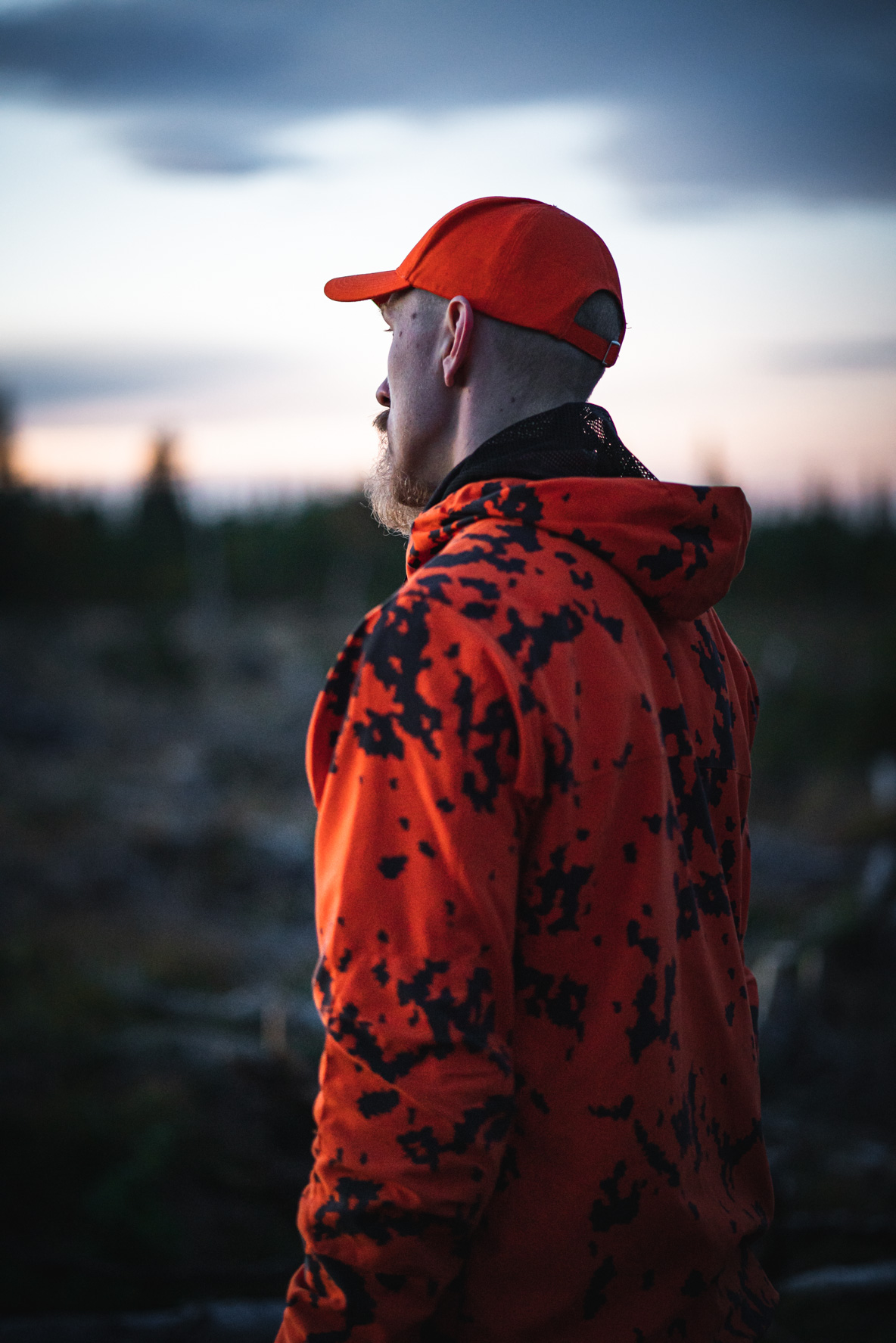 Särmä Merino Watch Cap
26.99 USD
Standard woolly cap engineered to its full potential. Superb fit, uncompromising workmanship and the best possible materials don't come cheap but this one should last for a lifetime, provided you don't lose it. 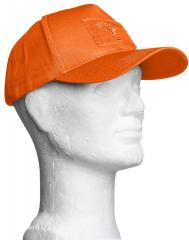 Särmä Cap
15.99 USD
Tired of shabby baseball caps? Here's a proper one! Say what you will, there's always a demand for yer standard baseball cap. But this ain't no cheapo crap, it's a solid, well-made cap - after all, it carries our name. 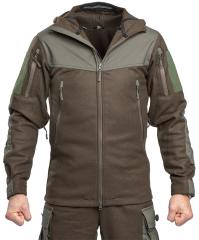 Särmä TST Woolshell jacket
209.99 USD
We've played around with many wool-based outdoor and military clothes over the years, the Woolshell is a completely re-thought design based on experiences and ideas gathered from numerous projects. Functionally this is much like a modern tactical softshell jacket with its minimalistic and sleek appearance. Combining this functionality with high-quality natural wool fabrics makes this a rather unique garment!

Särmä TST Woolshell Pants
188.99 USD
We've played around with many wool-based outdoor and military clothes over the years, the Woolshell suit is a completely re-thought design based on experiences and ideas gathered from numerous projects. Functionally these are much like a pair of modern tactical pants. Combining this functionality with high-quality natural wool fabrics makes these a rather unique garment! 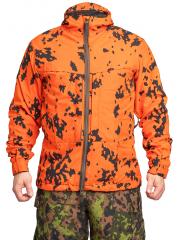 Särmä Jorma Hunting Jacket
157.99 USD
Meet Särmä Jorma, your best hunting companion that won't shoot you. No matter what and how you hunt, you will probably do it better wearing this jacket. Available in M05 Woodland and Orange Camo.

Särmä Jorma Hunting Pants
136.99 USD
Meet Särmä Jorma, your best hunting companion that won't shoot you. No matter what and how you hunt, you will probably do it better wearing these pants.