How to Protect Yourself from Ticks?


The most dangerous animal in Finland is the bastard know as the tick but even if you have zombie dragons in your neck of the woods, these small pricks are quite a nuisance anyway. But don’t let them control your life. You can go hiking, hunting, and fishing to your heart’s delight as long as you do it smartly. In this article, you can find a few tips for neutralizing the tick threat.

What do Finnish punk rockers and ticks have in common?

Why is there a punk rocker in the main picture? Since jokes always improve when you explain them, here we go. For some reason, the tick and the punk rocker share the same word (punkki) in Finnish. You don’t have to fear the punk rockers in Finland though. They most likely just drink all your booze but you can repel them with country music. The eight-legged ticks lurking among the grass are much nastier creatures. There are various kinds of them in the world but you only need to know that the evil ones are tiny, drink blood, and spread diseases.

In Finland, the main tick season is from April to October apart from the northernmost areas. They become active at +5 degrees Celsius (41 F). So, the warmer it is, the earlier they are out and about.

Why do we hate these fucktards?

This tiny vampire of the woods and meadows lives on blood that it sucks from wherever it can - especially rodents but also people and politicians. While casually doing that, it can spread two nasty diseases: Lyme disease a.k.a Borreliosis and tick-borne encephalitis (TBE). Lyme disease can have pretty bad symptoms and TBE can kill you if you are very unlucky. So, there are two tick-borne diseases (at least in Finland) that work differently and are also fought differently. This article revolves around the ticks found here. If your ticks spread something even worse, move to Finland.

Luckily the risk of catching these diseases is usually quite small, with the TBE very small. Of course, if you operate in a more contaminated region, the risk is somewhat bigger and it can hit you anywhere if you’re unlucky. So, you shouldn’t belittle these risks but no need to blow them out of proportion either because there are many things you can do to avoid these wankers

How about them vaccines?

You can usually treat Lyme disease efficiently with antibiotics but the TBE laughs at those pills from his skull mountain. Luckily there’s a vaccine against the TBE, which you should take if you spend more time in an area where that is more common. If you don’t roam in such a region, the need for the vaccine isn’t as acute.

Note! The TBE vaccine doesn’t protect you from Lyme disease or prevent the ticks from biting you. Neither will it give you a fast 5G network or create a communist regime around you. There’s quite a lot of info on the risk zones and vaccines online so we won’t cover them more deeply here.

Wherever may they roam?

The ticks don’t like a hot and dry climate so you won’t find them on sandy beaches or deserts. This means that you can go to the beach butt naked if you want, provided it is otherwise allowed. Wet grass and other humid undergrowth in forests, meadows, and fields are their favorite hunting grounds. You don’t have to avoid these places either as long as you think about what you wear and how you camp.

In Finland, there are these Midsummer spells that young women used to cast in the old times that were supposed to reveal their future husbands. Some of these involved rolling naked in the field. Nowadays, you won’t find your groom this way but your ass crack will be full of ticks. It is nice to walk around in very little clothing in summer. However, if the undergrowth is dense, you should wear long pants and long-sleeved upper-body garments. 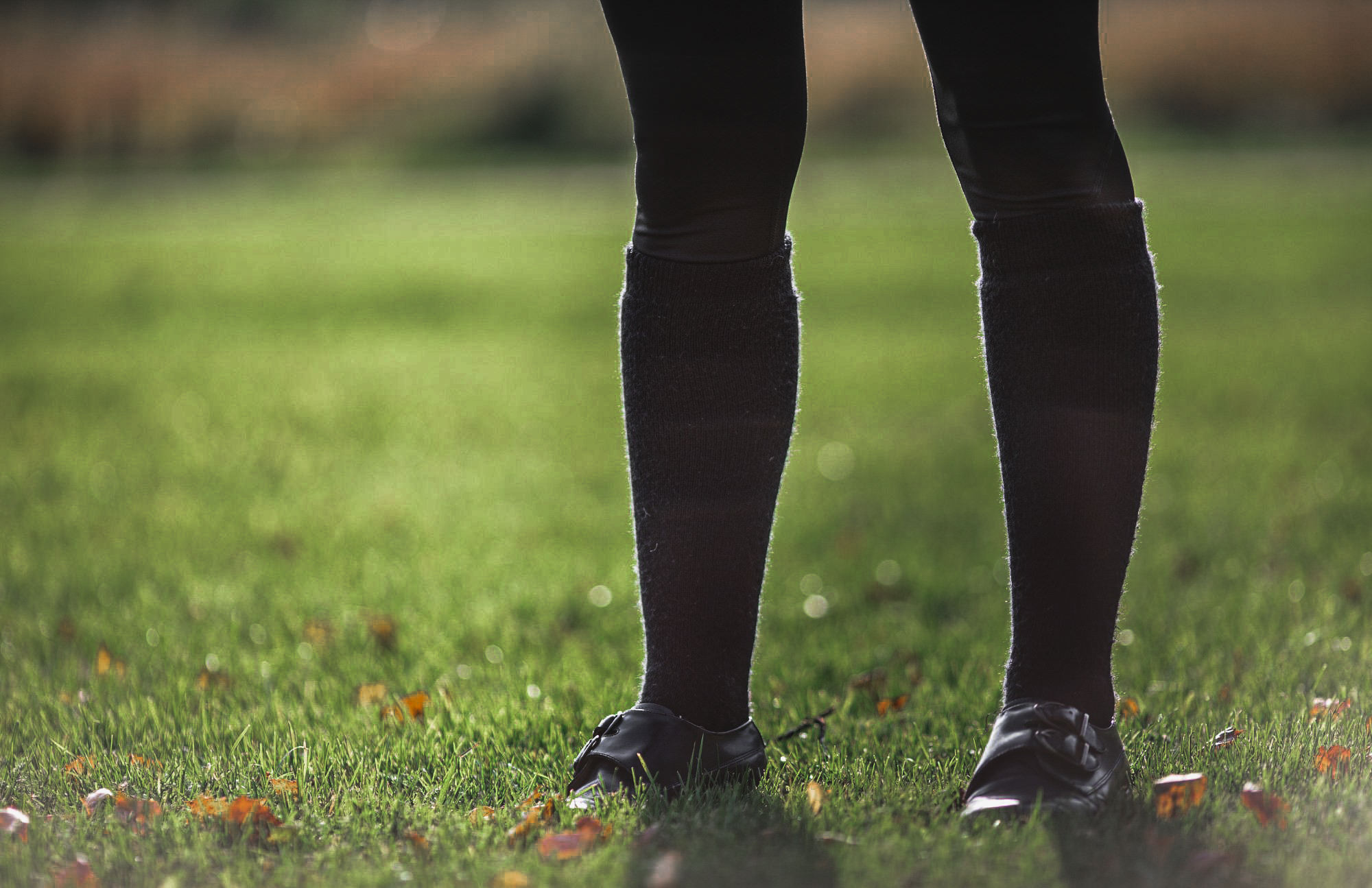 Tall hiking boots and even rubber boots are a good option for your feet. Although if you walk a lot or in difficult terrain, the former are better for your feet and ankles. If you wear low-cut footwear, it is good to wear gaiters in tall and wet shrubbery. They also protect the pants against wear and tear. 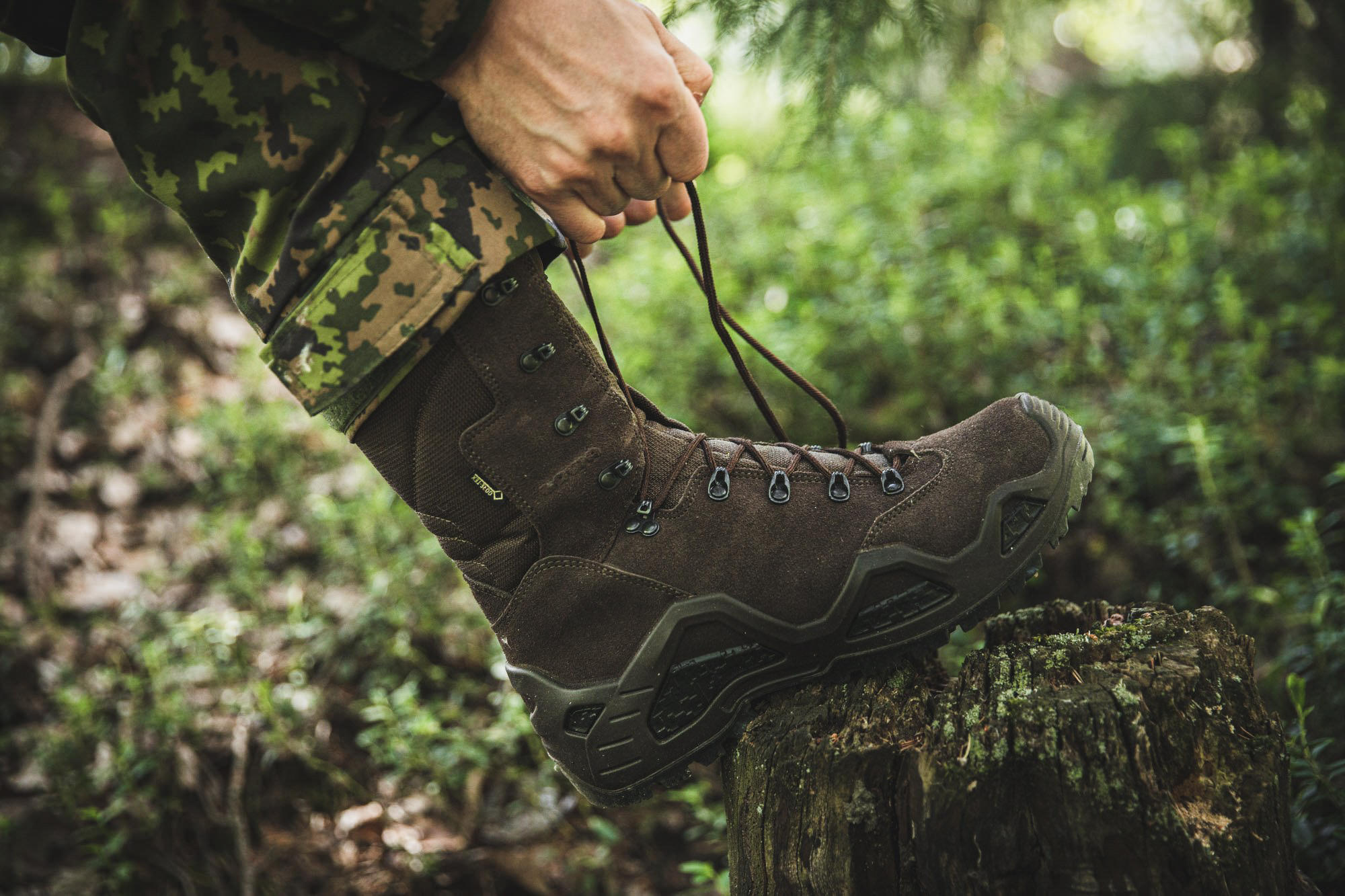 Open shelters such as the Finnish loue and various tarps are fantastic but in a tick-infested area, these small wankers can easily reach you if you lie openly in the shrubbery. If open shelters are your thing, pay attention to where you place your camp. Don’t put it in wet grass or other dense undergrowth or along deer paths. (The latter isn’t that smart for many other reasons either. If this isn’t possible, a better solution is a proper tent with a floor and a fully closable door. There you are also safe from flying bloodsuckers.

An even nicer option is a hammock with a mosquito net. It doesn’t really weigh much and you get off the ground completely. Unlike many folks think, the ticks don’t lurk on the tree branches and drop onto you like ninjas. So, levitating above the ground is a good way of keeping them away. And with the net, you won’t be bothered by the mosquitoes either. 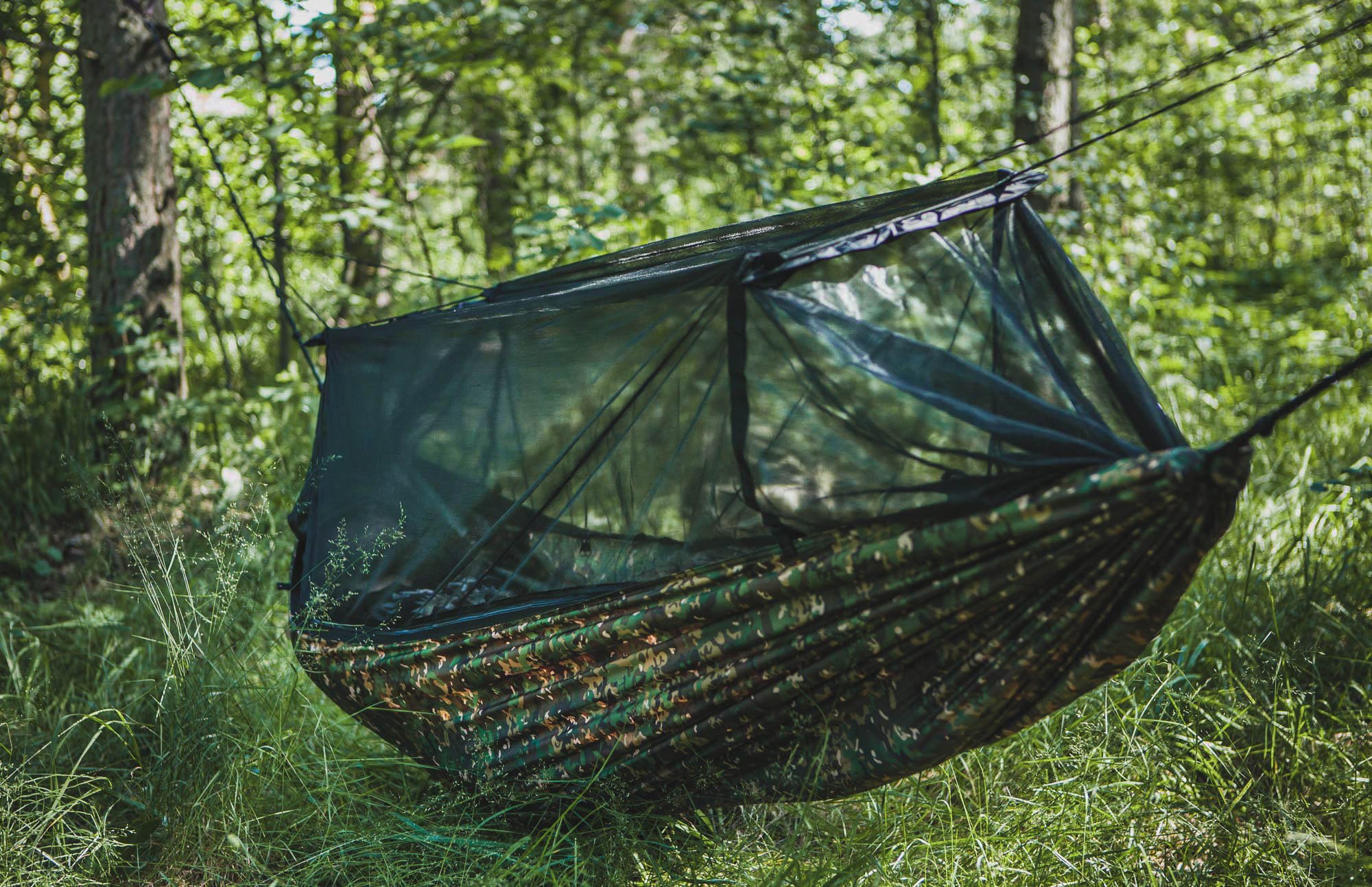 What about chemical warfare?

There are all sorts of sprays and other tick repellants on the market. Some people believe they are fantastic, some think they only repel money from your account. Since there isn’t much concrete evidence about their efficiency, it is a bit tricky to say much about these things. They shouldn’t at least attract the ticks or give them superpowers but it isn't wise to base your whole strategy around them. Other means might prove out to be a lot more efficient. 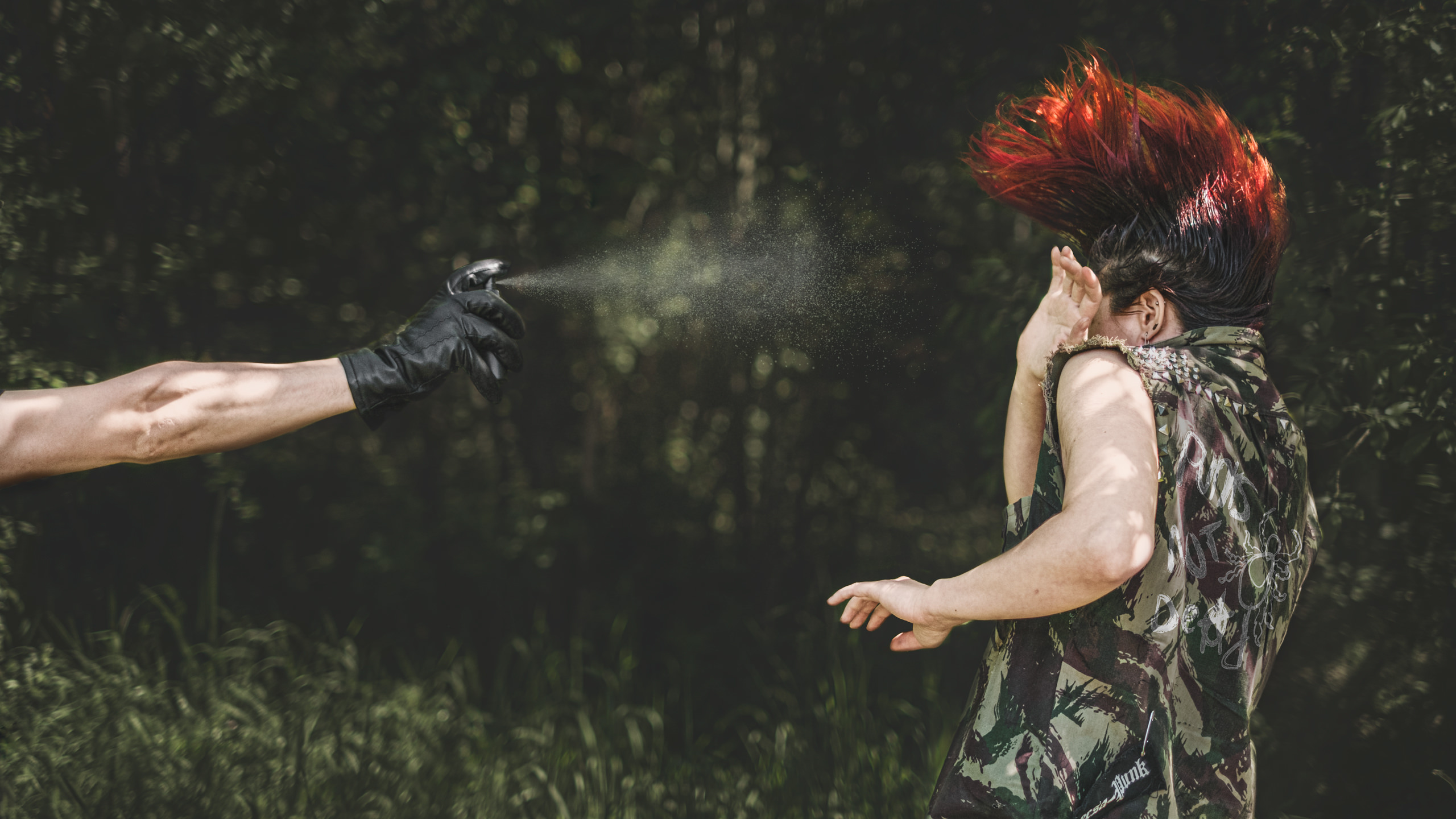 Spot the enemy in time

A vital part of tick warfare is regular recon operations. A tick can wobble around for quite a while before it strikes, so you can avoid lots of anger and misery with regular checkups. They can crawl into very exciting places so you should be quite thorough. The ticks climb aboard from the grass so they start their journey quite low but they can reach all the way to the top. So, examine the whole body, especially the scalp, behind your ears, and various crooks. Since children are smaller, ticks are often found in their upper bodies.

Don’t be shy and do ask for help from your friends because these tiny balls of filth can hide in places where your eyes cannot reach them. And there isn’t a better way to get to know your buddy than staring at their dark side of the moon.

If the tick has managed to bite you, remove it as soon as possible. The less time it hangs on, the smaller the risk of catching a disease is. Forget the old-time solutions. Don’t try to feed them moonshine, play them Brutopian march music, drown them in fat, or twirl them dizzy. They most likely vomit some radioactive goo in the wound.

Instead grab the tick as close to your skin as possible with regular or tick tweezers and pull upward with steady pressure. Don’t yank, squeeze, or twist it because some bits can be left in the wound. Ticks don’t die easily so you should really put some effort into their murdering. Beat them with a sledgehammer, chop in pieces with an axe, burn with napalm, anything that prevents them from coming back to haunt you. Clean the wound with a disinfectant and wash your hands properly. No need to resort to holy water and an exorcist though.

When to see a doctor?

In Finland you don’t usually need to see a doctor after a tick bite. Most of them just cause a max. 2 cm (0.8”) red spot on the skin, which usually disappears in a couple of days. It can be a bit itchy and hurt a bit as well. However, you should monitor the bite area for a few days. And if your region tells you to do something else, it is of course good to listen. We only know how these things work in Finland

You should definitely see a doctor if you cannot remove the whole tick. Or if a red 5 cm (2”) circle (or any equally big shape) appears around the bite area or it gets otherwise very swollen because that is most likely Lyme disease. This kind of thing usually appears a couple of days after the bite. Remember that it is possible to have borreliosis without any of the skin conditions, and then the diagnosis must be made based on later symptoms. Such are, e.g. joint and muscle aches and nerve-related issues. Lyme disease is treated with antibiotics, and most patients recover very well. However, with some, it can become chronic, so prevention measures are very important.

The symptoms of the much rarer TBE usually come in two waves. About a week after the bite, you get a fever or other flu-like symptoms (why does every nasty thing have flu-like symptoms?). This is followed by about a week without symptoms, after which come more fever, confusion, as well as a headache and other encephalitis-specific symptoms. You don’t have to Google what these are if you keep your vaccines in order.

Bugger off into the wilderness!

To summarize, the tick may be one helluva nuisance but it’s no end-of-level monster. So, there’s no point in being afraid of the ticks and letting them restrict your life too much. You can do quite fine with common-sense precautions.

You can still walk in shorts and light shoes on open paths in Finland: the ticks won’t teleport on your skin. This is possible in many other regions as well provided that your area doesn’t have some toxic wallabies or something else that requires a bit different attire. You can of course also dive in the good ol’ thick bush too as long as you dress right and look what you’re doing. You don’t have to beware of camping in the forest either as long as you do it in a sensible way. So, don’t drink all your friends’ booze and pass out naked in the shrubbery. 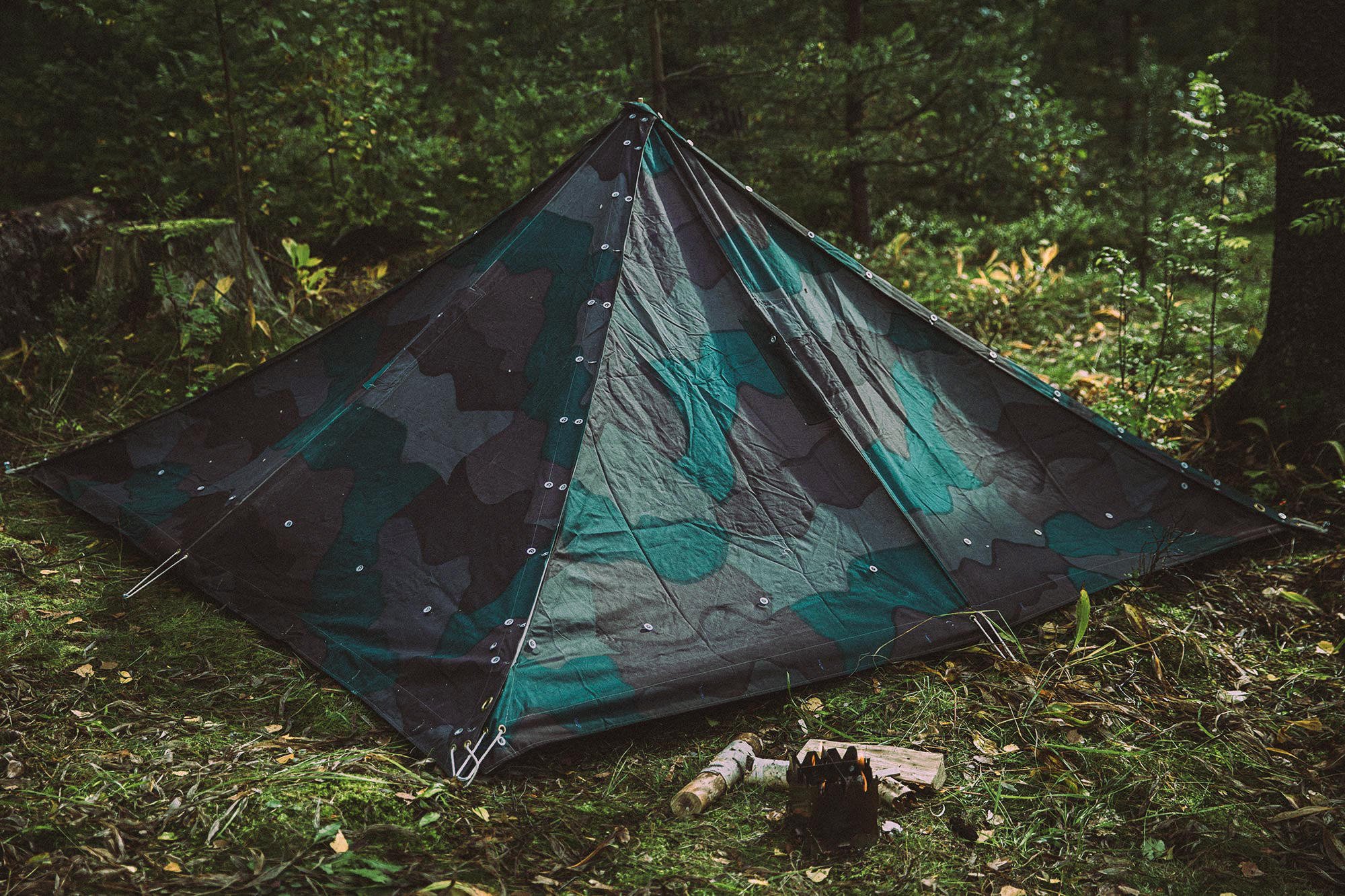