Army surplus: how it works


In a nutshell, army surplus is too good to be true, but it's true: durable, well-tested solutions for the most demanding use, which is military use - and for cheap. We'll tell ya what this stuff is all about and how it ends up in some Finnish army store.

Paid by the taxpayer

Let's take a country called Germany for example. Germany needs an army (oh shit). The institution and its property are paid for with taxpayer's money. The fighting forces need durable kit suitable for a million-man army. Depending on things it can be re-used within the armed forces from soldier to soldier until the end of its service life, or it's the kind of stuff issued new to each soldier and is eventually returned to the depot, never to be used again. Moreover, there can be model updates and such, rendering the old kit obsolete or "obsolete". This means the army has to get rid of this stuff at some point.

When the "getting rid of" part happens, the stuff is either scrapped or sold to the civilian market. The army does not need to get huge profits of this stuff, as its purchase expenses are already covered and the incentive to empty the warehouses is usually high. This is why military surplus is both cheap and of high quality. 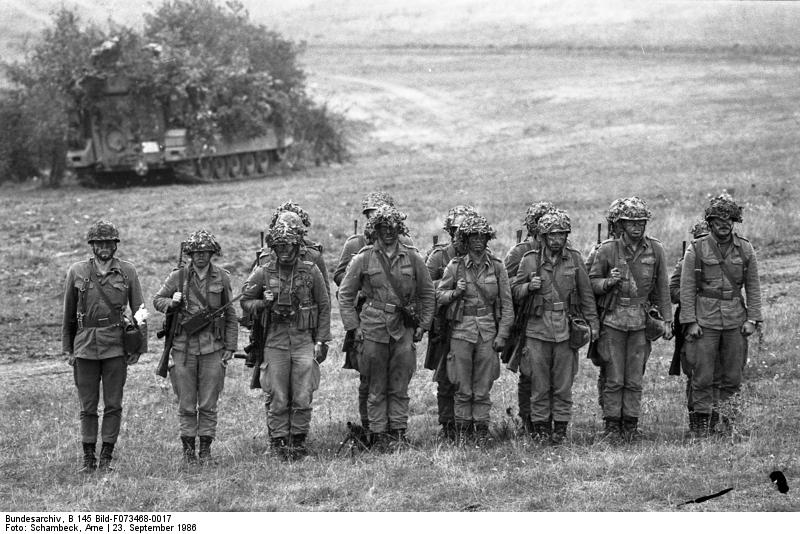 We probably have sold off the kit these Bundeswehr soldiers are carrying in this ol' photo.

The army hoards up the stuff to be sold and auctions them off. Large suppliers buy these lots and coarsely sort them out, repair if necessary, and then sell them.

This is where companies like Varusteleka step in. We buy the stuff from the supplier, sort it out more carefully and check the condition, find out how the sizes work and then sell it. Now the customer has everything laid out and knows what to expect when purchasing the product. In these aspects, Varusteleka is usually better than many others, as the customer doesn't have to guess a lot when purchasing from us. Moreover, we never leave the customer in trouble if the product isn't as described. 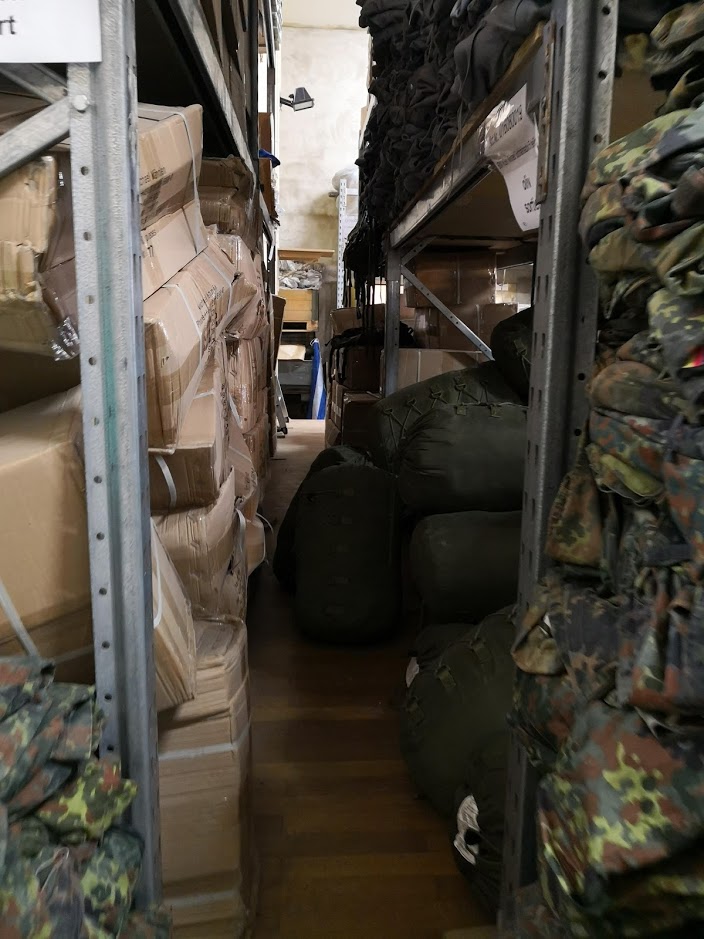 Photo taken in one of our suppliers' warehouses. Dark surplus corridors like these are the places to find the best pickings.

Army surplus is sometimes available from dead or undead regimes, like the DDR or the Soviet Union. The Soviet stuff is usually "surplus", meaning it's either from some ex-ComBloc warehouse, or purchased in Russia from an army base quartermaster with loose morale, by a person who knows someone, who knows someone. The Russian army never officially sells any of its property.

The DDR stuff was cheaper than dirt, and more readily available too when the Germanies united. It is still available to a degree, but getting more valuable and scarce as the mountains of Strichtarn dwindle. 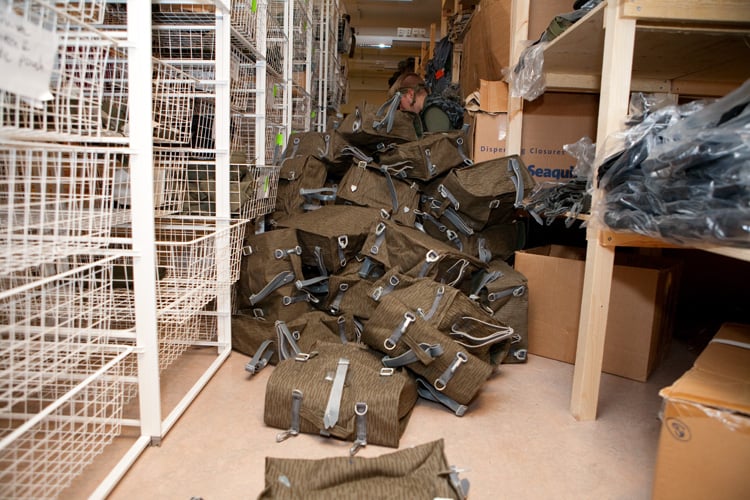 There was a time, boy, when DDR stuff was something everyone just wanted to get rid of. Our warehouse back in 2010 had a serious NVA Sturmgepäck infestation.

Live in the moment!

Army surplus is by nature very random - take it or leave it, tomorrow it might be gone! For example, we had a great contact in South Africa. His stuff was crude but very affordable. We were happy and the customers were happy. We thought this would last; we were wrong - the seller died and the company ownership changed. Boom! No more SADF kit for us.

Surplus lots are slippery and unreliable: some nice thing we take for granted might suddenly vanish from the market, or its availability becomes unstable, or the auctioned lot was more expensive to the supplier who bought it. These factors directly affect the price of the product. This has happened to many products. Of course, if a shirt that used to be 5 bucks now costs ten, it's still not an expensive piece of clothing when you consider that the market price of a new item of equal quality would be some 50-100 EUR.

Circulation at its best!

Army surplus is ecological, even if it was made from some living creature: the customer doesn't support the leather industry, for example, by buying used stuff. The army doesn't give a toss about fashion choices or ethics anyways.

Also, a large portion of army surplus is domestic production, or at least very close. This is actually a quite simple question about securing the quality and supply chain: the closer the product is made, the more its quality can be trusted, and you wouldn't want to be at war with your factories on hostile grounds. Nowadays some armies have moved their production to China (the Brits), but some are strict that the stuff has to be 100% domestic (USA). 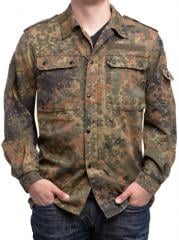 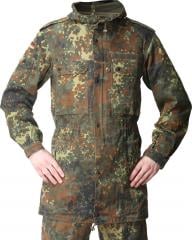 BW parka, Flecktarn, surplus
25.99 USD
The standard field jacket used by the Bundeswehr when it's not exactly an indian-summer. One of our top sellers, this parka is a tried and true modern classic and for a reason. We've also got matching trousers for these! 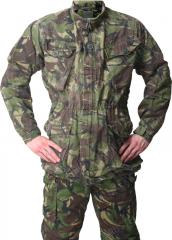 British CS95 parka, ripstop, DPM, surplus
20.99 USD
British Army Soldier 95 parka with DPM camouflage. Kinda like the classic Windproof Smock, but slightly lighter and not as oversized. A very nice allrounder whenever you need a decent jacket - just stuff a thick fleece or a sweater underneath if needed. 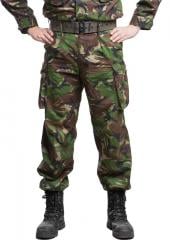 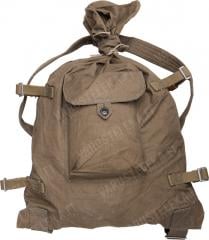 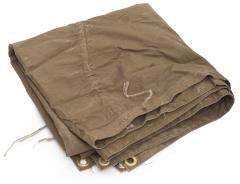 Soviet Plash-palatka, rain cape/shelter half, surplus
30.99 USD
A truly versatile piece of kit. Like most shelter halves used by armies worldwide, the Soviet model bends to a multitude of uses. There are better alternatives on the market, but the Soviet Plash is still the best with its ancient magical aura. 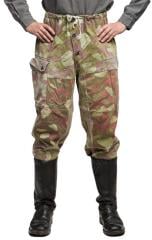 Finnish M62 trousers, surplus
15.99 USD
A local legend, the reversible M62 camouflage field uniform drags us back to the good old bad old days when zippers were unheard of and waterproofness meant a vinyl poncho.

Finnish M62 camouflage jacket, surplus
15.99 USD
A local legend, the reversible M62 camouflage field uniform drags us back to the good old bad old days when zippers were unheard of and waterproofness meant a vinyl poncho. 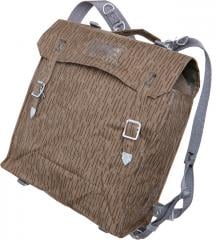 NVA Sturmgepäck combat pack, Strichtarn, with yoke, surplus
7.99 USD
The East German Sturmgepäck (assault pack) is not as bad a piece of kit as you'd think: a simple, square shaped pack made of thick, waterproofed fabric with Strichtarn camo, carried with Y-suspenders or anything you clip it onto. Can also be attached to bike racks with very little work! 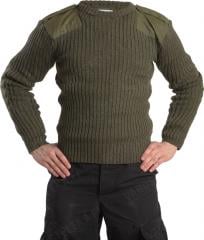 British jersey, men's, surplus
20.99 - 23.99 USD
A heavy round neck jumper, as used by the British Army. The same model sees service in the Finnish army too. This is just the stuff you want for cold winter months. Snug fit!
Webshop by Lillhonga.fi