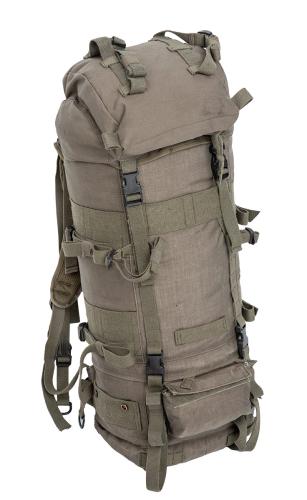 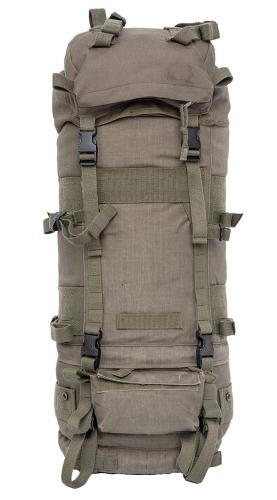 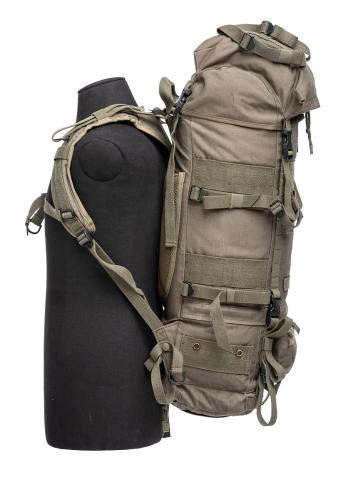 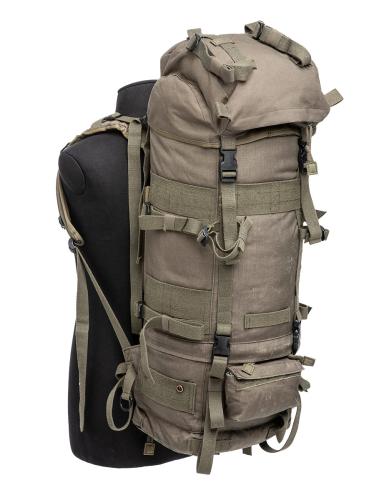 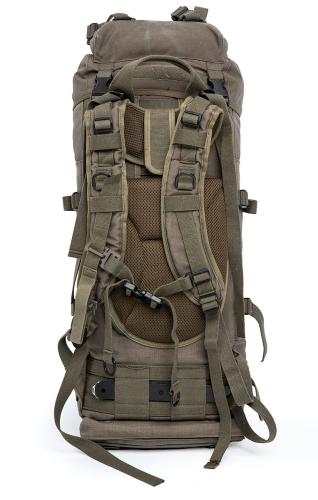 The hip belt of the system is the Austrian battle belt with a quick release. The hip belt is not included. Note! The latest batch is also missing the sternum straps. 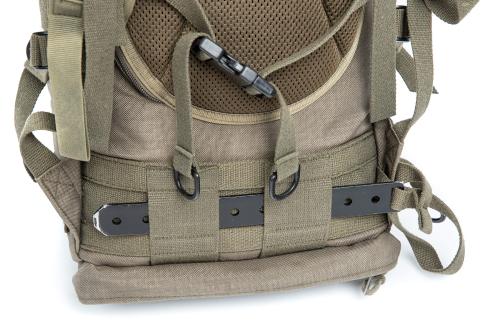 The hip belt mounting point is probably compatible with many other belts. The aluminum flat is not always included. 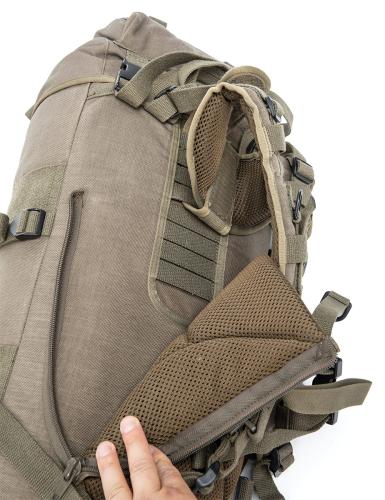 Adjustable to various back lengths. 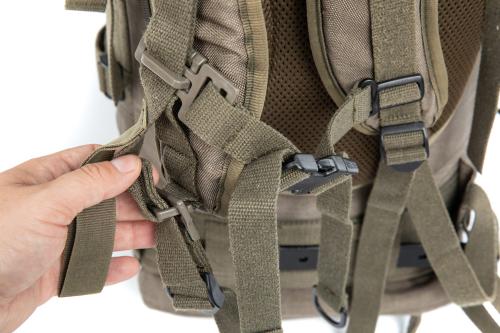 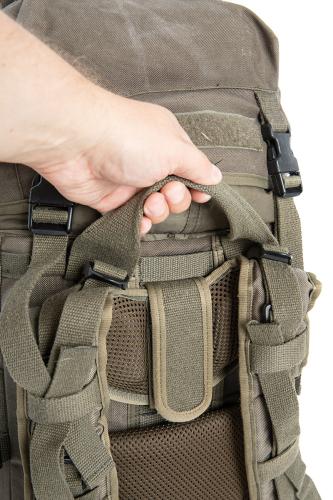 Sturdy heaving handle and the name tag logically next to it. 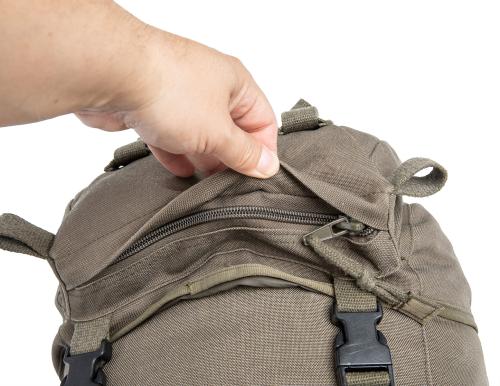 External pouch on the lid. 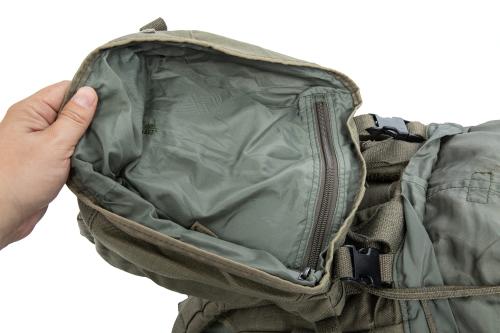 Large bag-like pouch under the lid. 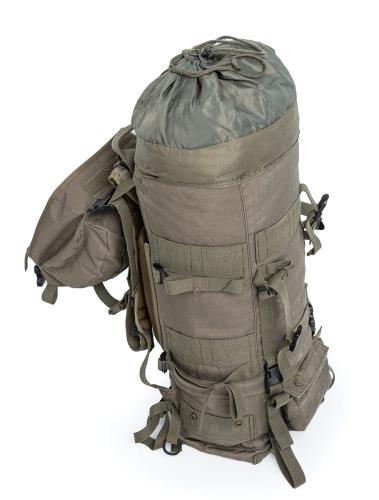 Lots of space for overpacking. 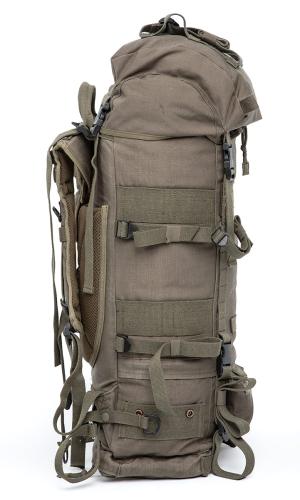 The sides have attachment points for additional pouches and the compression straps are long enough to tie down external cargo. 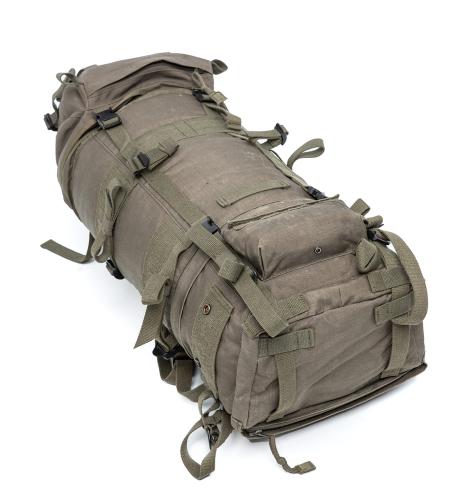 One more pair of utility straps in the bottom. 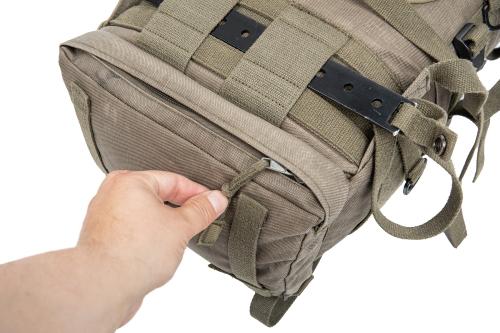 The bottom has yet another pouch, much like the lid pouch.
Austria

Here's a rather modern military rucksack that's designed to integrate with combat gear. Come up with a hip belt and sternum strap of your own, and you can turn this into a damn high-quality and low-priced companion for your outdoor adventures. 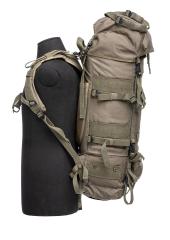 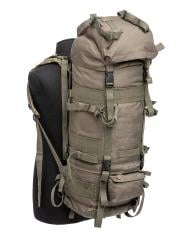 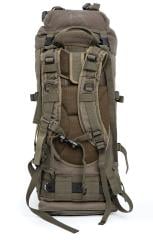 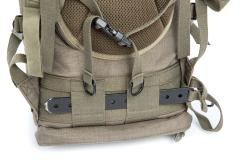 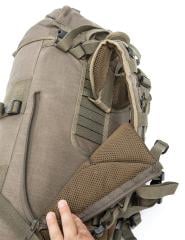 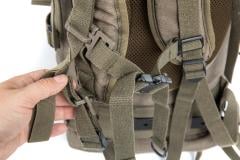 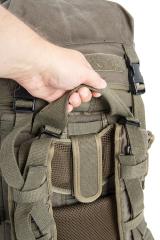 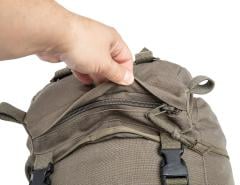 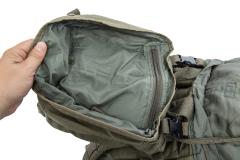 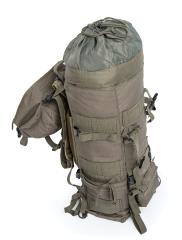 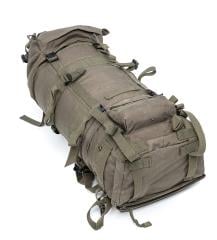 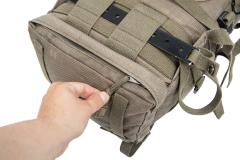 Here's a rather modern military rucksack that's designed to integrate with combat gear. Come up with a hip belt and sternum strap of your own, and you can turn this into a damn high-quality and low-priced companion for your outdoor adventures.

The Austrian KAZ 03 rucksack is anatomic; there's an internal frame consisting of three supports riveted to a horizontal one. The design is very narrow, something skiers appreciate.

The Austrian grunt has five levels of combat gear and packing. Pieces are switched or repurposed in various configurations. The rucksack is used at levels 3–5 and issued to ordinary infantry jaegers.

The ruck uses the combat belt as a hip belt and sadly it is not included. The attachment method is rather quick, there's a 30-mm aluminum flat on the rucksack and pulling it to the side would release the belt. You can probably use another hip belt and come up with a good attachment solution. The aluminum flat is not included with all rucksacks but it's easy to replace with something else.

The right shoulder strap also has a quick-release loop. Pulling it disconnects the sternum strap as well. Clever! By pulling on two loops, you can swing the ruck right off your back from the left shoulder while retaining the combat belt on you. Note! The latest batch is also missing the sternum straps.

The shoulder straps can be adjusted for various back lengths with a simple system and about 2 cm / 0.8" increments.

Where do we even start? At the flap: as usual, the flap itself is a pocket and accessible from the outside. On the inside, there's a large pouch for things you want to keep securely inside the ruck but also easily accessible.

The main compartment is simple, perhaps for the better. The bottom is a diaphragm that closes with a drawcord to separate the top and bottom. You can access the lower compartment through an external zipper that has buckle backups.

On the outside, there's a bottom pocket as well as a small accessory pouch with a flap.

Modular in every direction

Each side and the back has attachment points for Austrian pouches but the system is fairly simple and attaching other stuff shouldn't be a problem at all. The compression straps allow attaching other things than the pouch to the side. They are not only for tightening the pack.

On the flap and below the bottom there are even more straps for stuff like a sleeping pad. The flap is removable and allows overpacking if necessary.

The webbing on the Bundesheer KAZ 03 gear is interesting: soft and matte like a cotton strap, but actually made of proper durable polymer, most likely polyester. The looks and comfort of these are far better than the shiny and coarse webbing typically used on military and outdoor gear. Other manufacturers should take a look at these.

Volume approx. 45 liters as-is, can be expanded with side pouches to 60–70 liters.

Pretty modern stuff, you can actually use this even today and it won't be an exercise of The Suck where you remember the hard old days. All materials, stitching, zippers, and buckles are durable. These have been used, but are perfectly serviceable.

A good rucksack, but one important things worth mentioning.

This rucksack is OLIVE DRAB. Google Kaz 03 and you will see other examples of how green it actually is. Whoever took the photo for Varusteleka, either it was edited too much and now looks tan/brown, or it was a faded example, and it should mention in the description that the color is olive drab, some may be faded. Either way, I was hoping for a tan rucksack. I have a green one.

Varusteleka is usually excellent about providing disclaimers about color, condition, etc...This was a little disappointing.

Outside of that, it is a fantastic rucksack. Surplus gear is always the way to go, for me. I wish they had included a note on how to use the right shoulder release strap...I can't get mine to work. I guess I'll search Youtube.

Excellent rucksack, just waiting for a Kaz 03 belt to appear..

This link is instructive about the sack,

For the price this is awesome, came in clean and it had the aluminum flat piece. One buckle was broken so I had to replace it with the one from the sternum strap. The buckles seem proprietary and of an odd size so I don't think you'll be able to replace them with the same kind. Some tension locks are also a bit broken but still work, I should be able to replace them with a repair tension locks. One zipper wasn't locking the teeth but it was an easy repair. I love this thing and I want to get the side pouches for it!

I wish varusteleka had the belts to go with it! I did find an acceptable solution. Check the comments for my custom hip belt workaround.

Almost perfect and comfortable. My version came with pine needles. Austrian backpack was not compatible with BW belt or BW sleeping mattress in case Austria goes to war against Germany sometimes. I appreciate that the top comes off. It is modern and I have so far used to carrying food from grocery store on bicycle.
0

Report abuse
Daniel S. 08.10.2022
So I found a good way to attach a hip belt to this and if someone has a better way please let me know.

You'll need a savotta jäakari L hip belt, 2 särma test twin column MOLLE belt adapters and two MOLLE clips (HSGI). Once you have it all together you'll figure it out! Haven't tested it yet but looks solid. I'd post pictures if I could.