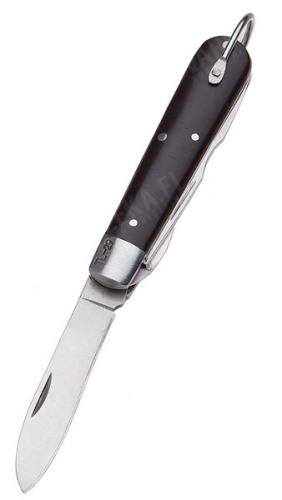 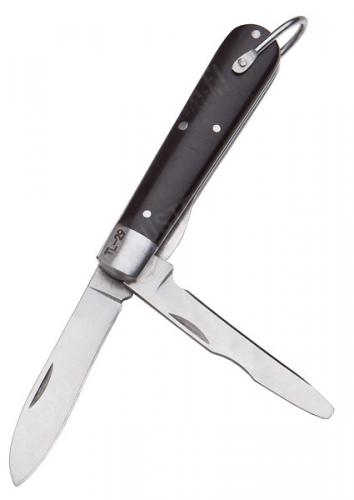 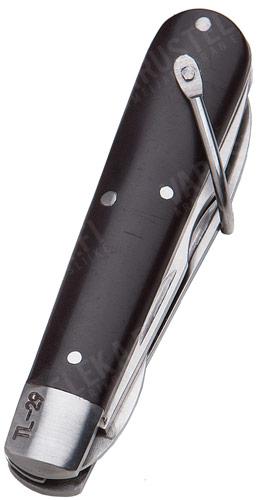 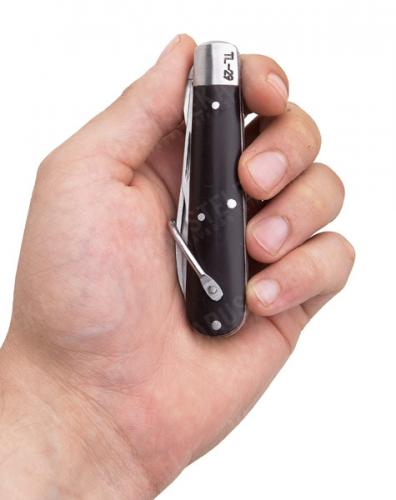 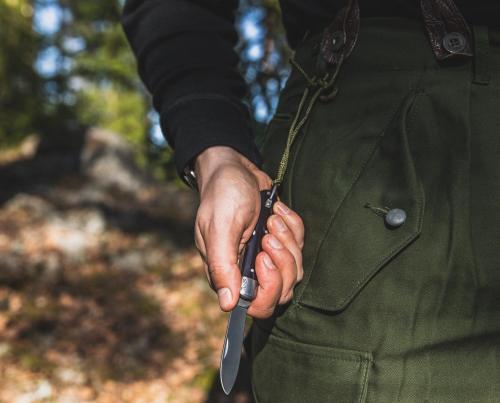 A century-old design, the TL-29 has been a favorite in the US military throughout its life and is still an iconic working man's tool. This robust little thing is love at first sight! 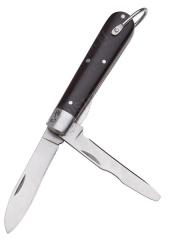 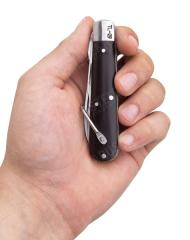 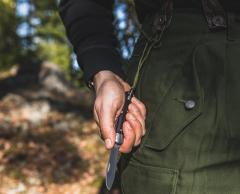 A century-old design, the TL-29 has been a favorite in the US military throughout its life and is still an iconic working man's tool. This robust little thing is love at first sight!

TL stands for "Tool for Linemen", these were issued to electricians and others who had to fiddle around with cables and such in the service, and many men kept theirs after they had done their part. These have been manufactured by loads of different companies over the decades, with the design undergoing only minor changes, which says something.

The TL has two blades, a standard one as found on any folding knife and one with a sharpened, flat tip that doubles up as a screwdriver. The latter one features a liner lock, a simple design that secures the blade firmly in the open position.

New production, made by Mil-Tec.

It's very small and light, cuts through most anything you would expect a small electrician's knife to cut. The only flaw is that when closing the normal non-locked blade it contacts the stop and dulls it on that spot over time.

I personally just dislike carrying about a medium sized pocket knife. I either have dikes or aviation snips on hand so I really like these.

I think that they were made out of carbon steel blades back in the time, which are easier to sharpen and held a better edge. This interpretation delivers what it promises, but don't get too happy go lucky using the flat pointed edge as a screwdriver, the tip is quite thin and it will bend under stress.
It's an interesting choice if you want a knife and don't want to carry an 1337_Oprtor xXinthemiddleofthenightXx blade that makes people freak out every time you open it while asking "Is that legal?". Nah, this is a grandpa knife that evokes a sense of calmness and security around you.

The best. My Grandad had one of these. I can't tell the difference! Nice and well made. I carry it constantly and use it 2-3 times a day.

Decent quality for the price, there is no blade wiggle and no obvious sharp edges on the parts that aren't supposed to be sharp. Fit and finish is on par with what you would expect for a working knife and for the price, this is a €15 knife and not some master bladesmith's work of art. The blades are not amazingly sharp out of the box, but a few strokes on the stone takes care of that. The action is a little stiff to start, but like any slipjoint knife, it will get nice and snappy with use.

One reviewer noted that the non-locking blade contacts the stop when closed, mine doesn't have that flaw, and I would even consider slightly modifying it to close a little bit more than it does right now. So there may be a little variability in production, YMMV.

Absolutely recommended if you need a no-nonsense pocket knife that doesn't try to be some kind of totally hardcore tactical operator stuff. It's just a knife.

Very decent pocket knife. Not quite the quality of a victorinox, but well made nontheless.

The blades came properly sharpened. The knife is large enough to hold comfortably, but not so large that it becomes a burden to carry in your pocket.The old-fashioned design also makes it a pretty inconspicuous tool for everyday carry, without frightening all your easily spooked wimpy coworkers.

The scales appear to be made out of wood. I don't know what kind of wood it is.

The lanyard loop is very wide, I would have preferred it if it was less pronounced/more flush with the knife (it loops out to almost twice the width of the knife itself).

The blades do not make contact with the washers when closed, but the spring has enough give that when you allow the knife to slam closed under spring pressure, the edge might slam into the washer, chipping the blade (happened to me after three days or so). So be careful to hold onto the blades when closing them, and to close them gently. Unless you like having to sharpen your pocket knife every week, of course.

The liner lock on the flat blade doesn't always engage properly, tough this might be because the knife isn't properly worn in through use yet. When it does engage, it works as intended.

I would say it is worth the money.

Nice knife. Can be made razor sharp.
0