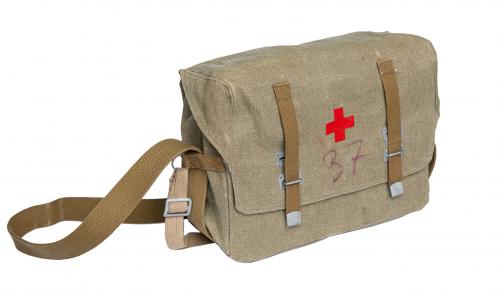 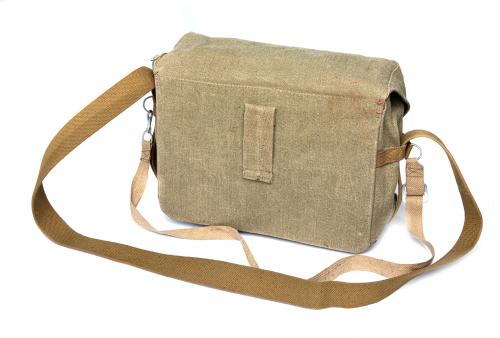 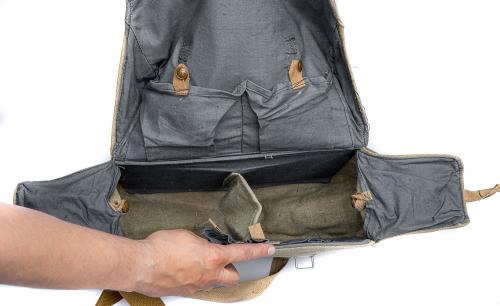 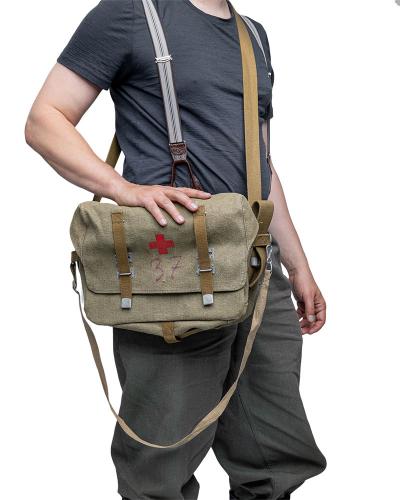 Despite the common consensus, "field medicine" in the Soviet Union wasn't always the 7,62 mm magic pill, they honestly tried something else too. This bag is meant for the team medic and used to contain various bandages, very illegal substances, and a bunch of tourniquets. But the bag itself is actually a very nice piece of kit! 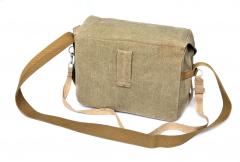 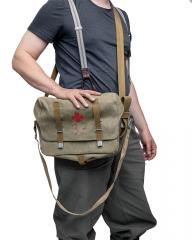 Despite the common consensus, "field medicine" in the Soviet Union wasn't always the 7,62 mm magic pill, they honestly tried something else too. This bag is meant for the team medic and used to contain various bandages, very illegal substances, and a bunch of tourniquets. But the bag itself is actually a very nice piece of kit!

Made of coarse canvas with stiffened front and back and a multitude of small compartments on the inside. If you remove the divider, this case will take in most laptops. The lid works with the old-timey quick-release straps. Dimension from seam to seam about 31 x 23 x 12 cm / (12" x 9" x 4.5").

Carried with a very strong strap, which is the same stuff the Soviets have been making weapon slings since the times of the Golden Horde or something. It runs all the way under the bag and is of course adjustable. There's also a waist strap, which is not so formidable.

Usually very little used or not used at all. Each and every bag is real Soviet army stuff. There are some small variations with the models, see the extra pic.

I purchased two of these bags as Christmas gifts for family who are in emergency response professions. Both bags came in very good condition, with just a whiff of strong storage smell and a musty feel to the fabric. One bag was a darker green (darker than the additional pictures on the website) and the other was a lighter tan (identical color, I think, to the tan Soviet AKM mag pouch that Varusteleka currently sells). Both bags had vinyl red crosses in white circles sewn onto the canvas, not printed like the pictured example on the website (I think the ones I purchased must be a slightly newer model than the one that is shown). There were various numbers penciled onto the vinyl red cross patches. The insides of both bags were clean and appear to be unused. I even found a plastic pack of Soviet-era safety pins in one bag (dated to 1988). Bonus!

One could easily cut the divider in the main compartment to allow the bag to accommodate a laptop or larger books. Also, there are leather straps on the front of the bag, underneath the main flap, that allow the bag to be adjusted for a more open or closed fit. There was a minimal amount of verdigris on the metal strap fittings and adjustment points, but no damage. I am quite happy with these bags and I hope my family members will be as well, when they get them.
2

I have one of these bags from a different vendor, but it's the same bag. Mine is green and came with a vinyl red cross patch, but otherwise same layout of straps and such.

It's a very sturdy bag, and I really like how the shoulder strap supports the bottom of the bag. Overall I do prefer the Romanian breadbag since it has soft sides and not hard sides like this one, but this is still a very good shoulder bag and you should absolutely get one if they ever get restocked.

EDIT: I have repurposed my bag into a great bicycle pannier bag, with two trailer tarp hooks, a generic elastic luggage strap and a some spare screws and nuts. The extra fabric on the back of the bag was unstitched and repurposed to keep the elastic in place. A handy little DIY project. If more of these bags become available, I am absolutely getting another one, for a matched pair.
0