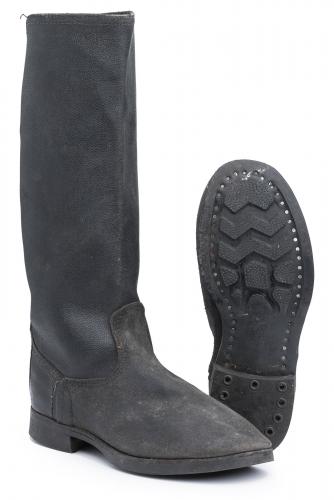 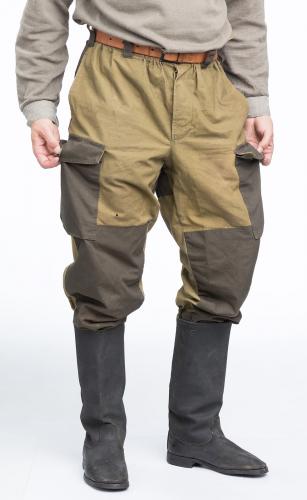 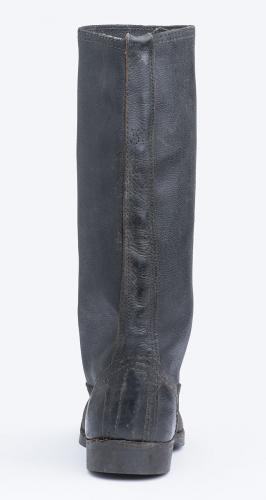 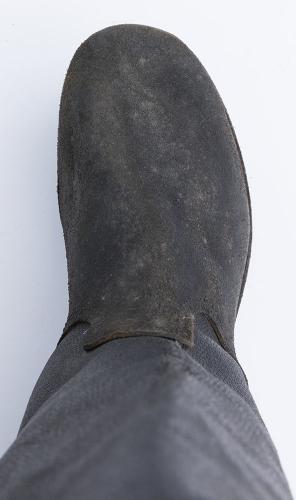 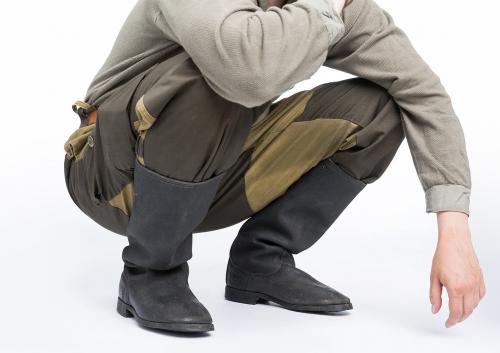 The boots are well fit for squatting. 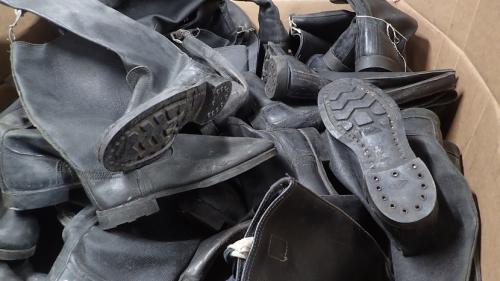 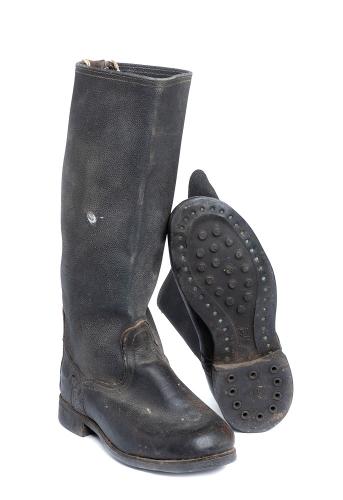 We got a couple of WW2 style dimple soled boots too. 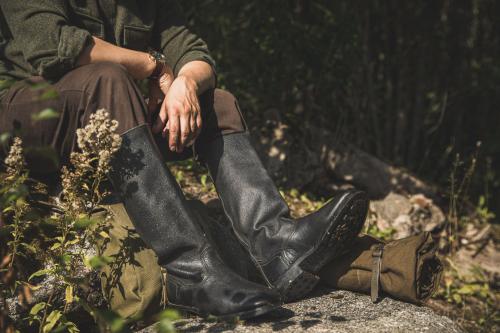 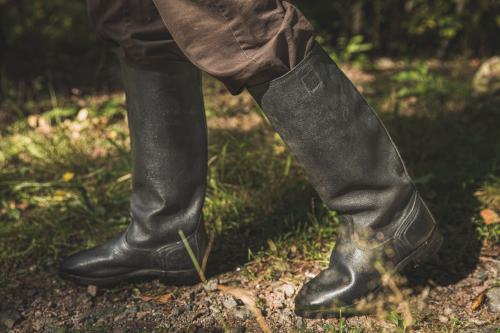 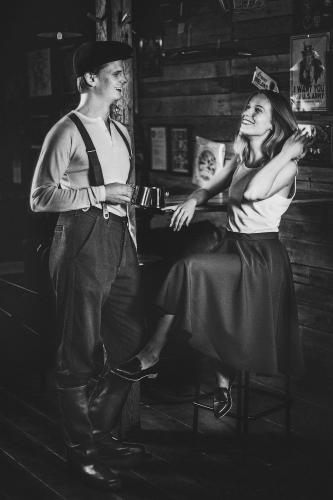 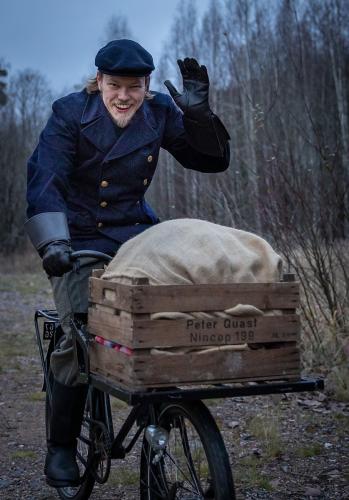 A one-off lot of Soviet enlisted men's Kirza boots called Sapogi! The crudeness makes these rather charming, but the boots are no joke. 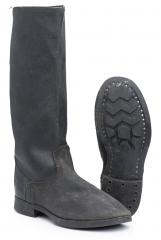 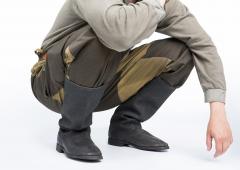 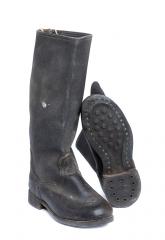 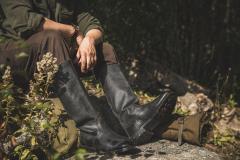 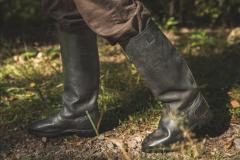 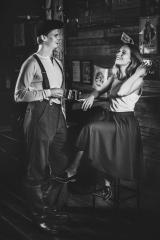 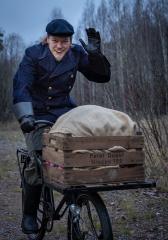 A one-off lot of Soviet enlisted men's Kirza boots called Sapogi! The crudeness makes these rather charming, but the boots are no joke.

Oh joy! We got another lot of these, found from some guy's garage or something.

While the model was taken into use during World War 2, they wore these officially up to the 90's and unofficially even beyond. We heard the Mongolians are keen on Soviet surplus boots these days, who knows if they're planning a reunion tour across Europe or something.

Half vegan, half Russian

The outsole is rubber, which is nailed on leather midsoles. The lower is made of surprisingly good quality, thick unlined leather and the shaft comprises of Kirza with a leather support strip on the back. Kirza (or some call it Kersey) leather was one of the most important developments during the war, saving hundreds of Roubles when they made soldiers' boots. The inventor, a chemist named Plotnikov, was given a truck ton of roubles and the hallowed Stalin State Prize medal for his efforts, a ticket for NOT (likely) being transported to Siberia. Kirza leather is still made today. It looks very much like the real thing and keeps water out pretty well.

We got a couple with the WW2 type dimple sole. These boots are sold separately. The boots haven't been made during the war, they are later produced.

Sizes in the Soviet system, which is first the recommended foot length in millimeters, then EU/French size. These are designed to be used with footwraps, so if you wear socks, wear thicker ones.

So, how did this stuff find its way in Finland? Well, when the Soviet Union collapsed, the former satellite states gained their independence. There was a huge leftover stock of Soviet stuff still in the old army bases because the Russians left in a hurry or didn't just care to take their shit with them. Most are gone, but these leftover stocks are still occasionally unearthed, like these Kirza boots dug out from some garage in Estonia or Lithuania (both countries used to be unwilling parts of the Sovietosphere). That's how secure the availability is in the future.

I'm a UK size 8, I got the 262 size, and these boots fit snugly with a pair of thin socks with army-issue arctic ones over it,which is nice. They are crude, but incredibly tough in construction. Good thickness for the temperate weather in England.

I'm going to replace the insoles as the ones that came with it make a popping noise as I walk, but no dramas; they're perfectly usable as is.

The best bit? Considering that Hunter wellies made in China cost ~£100, these boots are an absolute steal. They do the job better, look better and have the blessings of uncle Joe.

Bought a pair of these some time ago and I must say that I love them. Crude, tough boots and the leather quality is surprisingly good. Really good boots actually, I use mine for all sorts of outdoorsy stuff. Hunting, working etc.
These boots don't shape themselves with time to fit your feet, they reshape your feet to fit the boot. For the greater good of the industrial proletariat of the world I suppose.

When you have used the for some time you will kind of feel like marching to Berlin and back, maybe even to the hills of Manchuria.

The nails in the soles though.. you definetly will need a pair of extra soles in them otherwise the boots will carve new holes in your feet.

..and they smell like an old soviet warehouse. Big time.

Just recieved a pair of 41/262 boots and I am an American size 8.5. They are very narrow and much smaller than expected. Based on my research they should have fit but thats on me, just know that these run a lot smaller than the Finnish army jackboots. A pair of 41 Finnish army jackboots fits perfect with tons of room for socks with the Russians go one size larger! Ive already oiled mine so cant send them back so dont make my mistake!
Edit: According to all other size charts Russian 41 should be a size 9 equivalent to a European 42 so Im not sure whats going on but the chart listed here is out to lunch. I have also been told that these boots come in multiple widths so I am wondering if I was simply sent a narrow? Any information would be a blessing.
Edit: my boots are indeed marked y, narrow. A C would denote medium and W is wide. Be aware that these boots come in different widths!

They're nice boots, but the sizing is way off. I generally wear a 42 or 43. Ordered both, the 42's were too narrow and the 43's had my heels slipping with every step (even with my thicker wool socks). The heel area is very stiff and a blister hellzone, even after trying to soften them up for a few days.
If I could eventually find these in the perfect size, then they would be worth it.

The pictures are of the Cold War era sapogis, but I received the post-cold war m94 style with straps and buckles
2

I was worried about width when I waited for these to arrive. Luckily I received a pair of regular width, marked "C". After some cleaning and lubrication I tried them on and they fit like a glove! Yes, they do smell like they've been dragged through Siberia behind a horse, but I've found a good solution that makes your partner more likely to allow you to keep such things inside the house; spray the inside and outside with Glade (or something like it) and it'll settle in an amount of days!

Also; the soles that come with them, or at least some pairs, do look to be made of fiberboard and are hard as rocks. They are not fiberboard, but leather, and can be treated just like any other part of the shoe. Give it enough leather balm and it will soften up quickly.

I had to wash the boots twice though. Whatever shoe polish they used back then in the soviet union gives off a lot of blue coloring. I just put them in the bathtub, brushed them with leather soap and sprayed them off. They're still as black as before, but they don't give my hands a blue tint anymore.

Like another reviewer said, mine do slip at the heel, but boots with no laces are supposed to have lift until they're broken in. Rather unintuitively, contrary to lace up boots, with laceless boots you'll get chafing if the heel sits too snuggly at the heel. As long as your foot sits in place and doesn't move forwards and backwards in the shoe itself you should be fine. How much your heel should lift is mostly up to what you're able to tolerate. As the boot softens it will stop happening.

Edit: I've been walking in these a couple of times now on different surfaces. I took my first longer walk on asphalt which I kind of regretted since the boots weren't worn in at all. The shape of the sole has meant that the insole was shaped like a little mound and that made keeping your balance pretty difficult. Since then I've walked around in them some more, and they've evened out a lot since.

The whole sole is very hard, and with time it softens up a bit and the heel lift I talked about does decrease as this happens. I would say that if you feel like the boot is still hurting your foot after walking some miles you might have the wrong fit.

Don't pack too many socks in there. Instinct tells a person who wears lace up boots that it needs to fit tightly everywhere (especially the heel) but some slipping is better than none. I'd say the cowboy boot scene has the best documentation about boot fit out there.

Very nice and tough pair of boots. I ordered a size 40 (my real size) and they fits well. perfect for reenactment sessions and rainy days!
0

Report abuse
Inka Varusteleka employee 06.06.2022
Size 7 is the only one available at the moment. We don't know when we'll get more sizes. The availability of the surplus products is a bit hard to estimate, unfortunately. Contact our customer service for more information!
1