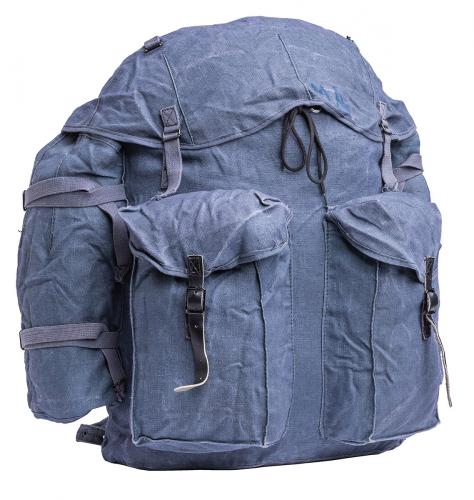 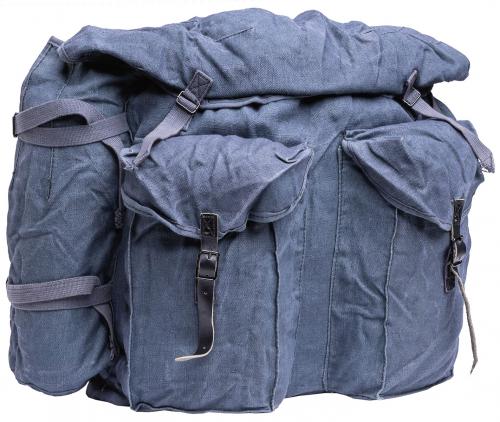 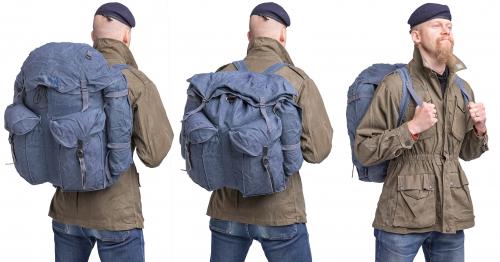 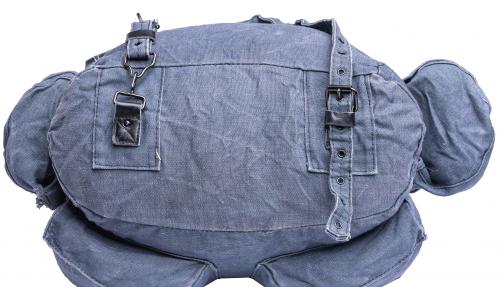 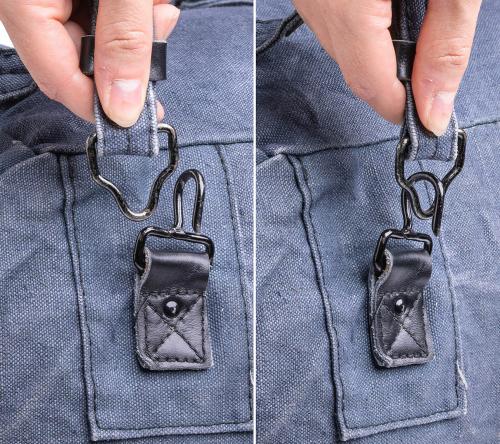 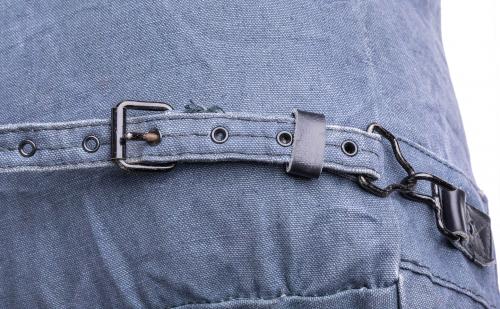 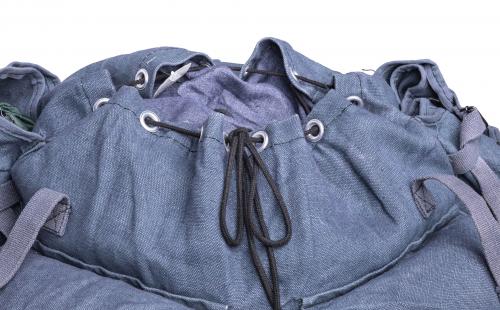 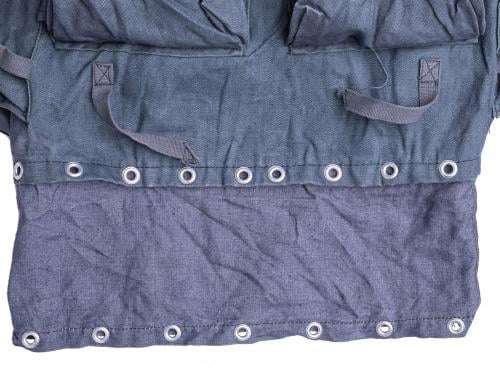 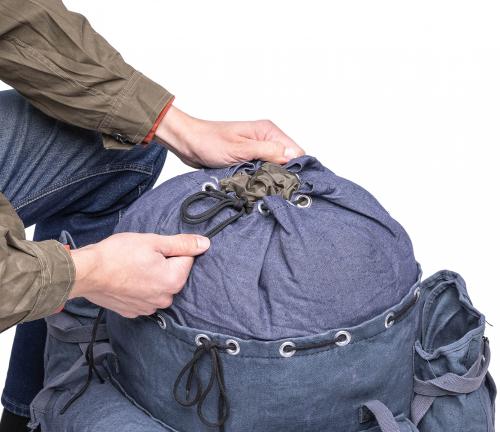 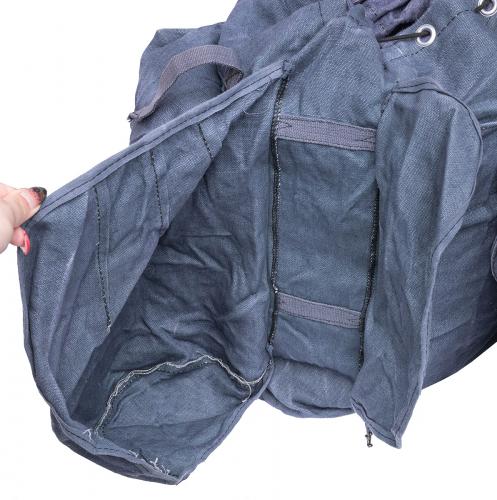 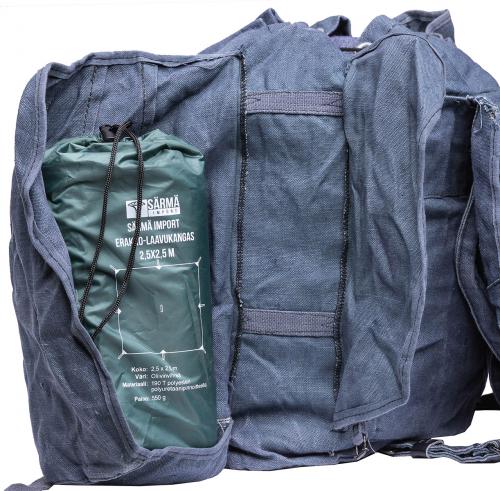 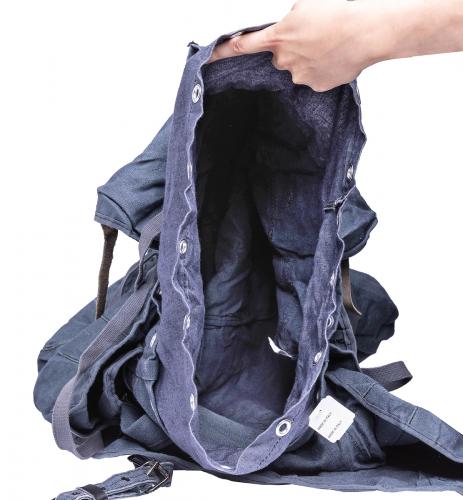 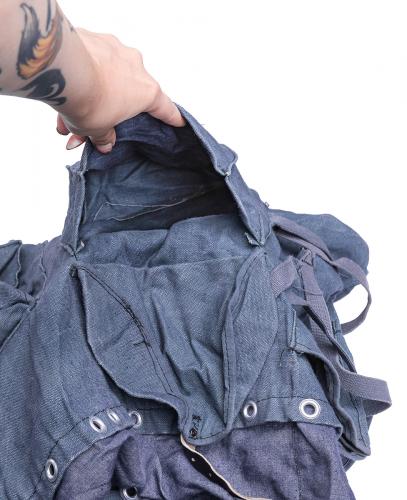 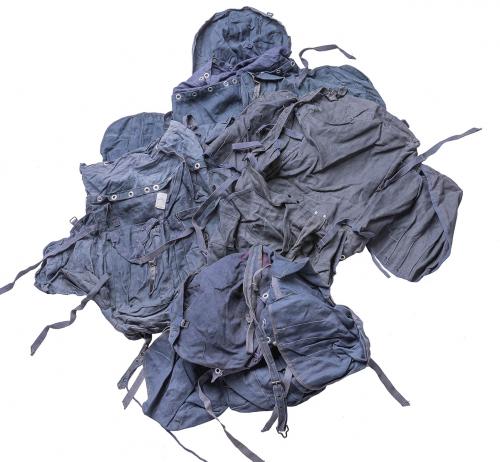 Unique design from Italy. Sympathetic round rucksack made of tough, blue cotton canvas/linen. Ergonomics are exciting (i.e. shitty), but the whole thing has that delightful vintage charm. Cheap, too. 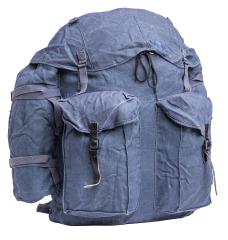 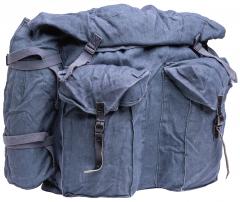 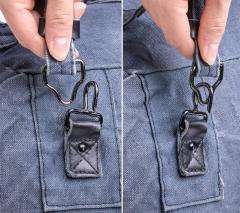 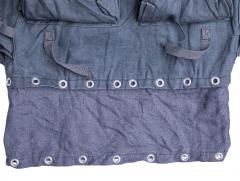 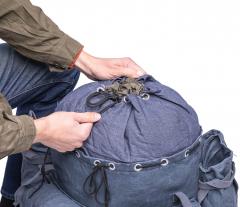 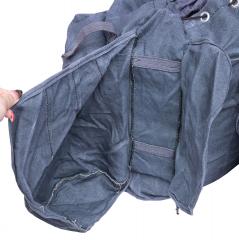 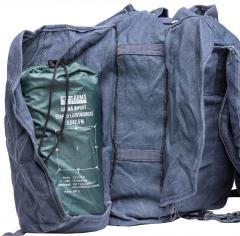 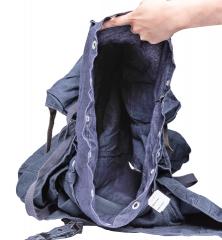 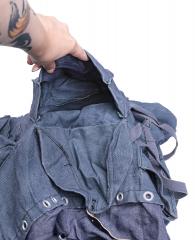 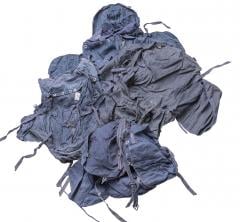 Unique design from Italy. Sympathetic round rucksack made of tough, blue cotton canvas/linen. Ergonomics are exciting (i.e. shitty), but the whole thing has that delightful vintage charm. Cheap, too.

This air force rucksack is somewhat similar to the Italian mountain rucksack that we have been selling but there are some differences. In shape, this is a spineless and frameless blob with simple unpadded shoulder straps and no hip belt, sternum strap, or other modern decadent things. The other shoulder strap has a pretty crappy quick-release system. Well, actually it releases it too quickly but you can easily bend it completely shut if you don’t need to get rid of your pack suddenly at any point.

A large undivided main compartment and four smaller pockets, two of which are actual pockets. The rucksack is quite spacious, probably around 50 liters or even a bit more in total. However, since the ergonomics are what they are, you should only overpack this if you want to maximize your misery. If you want, you can put something inside to make the body a bit more rigid, for example, a suitably folded sleeping pad.

The main compartment is closed with a flap. Additionally, there are two rows of grommets at the mouth of the pack that take a drawstring. The strings are not included but they are very easy to make. You can use them to close the sack either for a regular load or a pro-style overload. The two pockets are closed with leather straps. Some of these might have canvas straps, too.

Furthermore, there is a bit peculiar open "pouch" on both sides of the pack. These are quite nice for carrying stuff that you don’t want to store inside the pack, e.g. wet rain clothes or Kryptonite. Originally these are probably meant to house the rolled ends of a blanket; you roll the blanket so the center fits under the lid, then hide the ends in these "pouches". Now it's theoretically protected from the elements. These peculiar pocket thingies are missing from the Italian ground/mountain troops rucksack, probably because they are issued a separate shelter half inside which the blanket is rolled. However, air force personnel will not sleep under such ad-hoc hobo shelters.

These are some sort of cotton canvas and linen blend but we don’t know the percentages. In any case, durable stuff. If you love canvas backpacks, you will be turned on by this, especially since the quality is high but the price is a lot lower than in modern ones. Besides, you won’t see much linen on modern packs these days. This material is perfect for those who appreciate silence. It won’t swish or rustle much.

Italian air force surplus. Pretty old and used but in perfectly serviceable condition. Some even had tags from the 1990s, Jesus Christ. This is a minor miracle in itself considering the strong early 20th century look and feel of the pack. The canvas straps can be a bit frayed and leather straps worn, and you might find the initials of the previous owner on these. But these are minor things. Just get one, you'll be... uh, happy, we guess?

I got one of these not expecting much and was quite surprised that it was a pretty good pack once I had everything sorted out. The pack can hold quite a large amount being 50 liters and all and has held up to camping and hiking well.
3

The fact that this pack was previously owned by Sergio Spinelli makes it worth the price alone. I had plans on dyeing it black but Sergio had already done it for me. Quality old school charm at a great price.
3