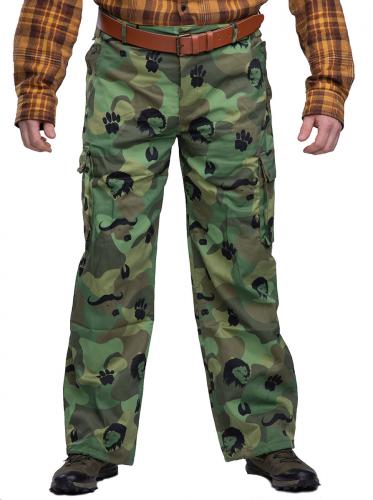 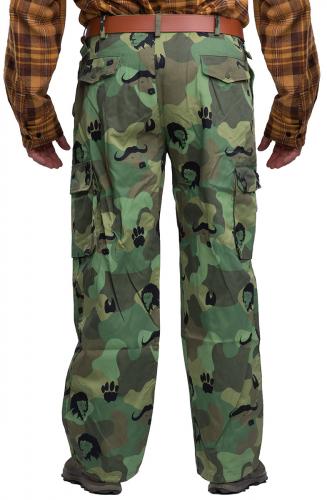 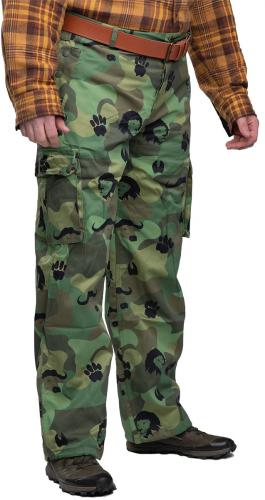 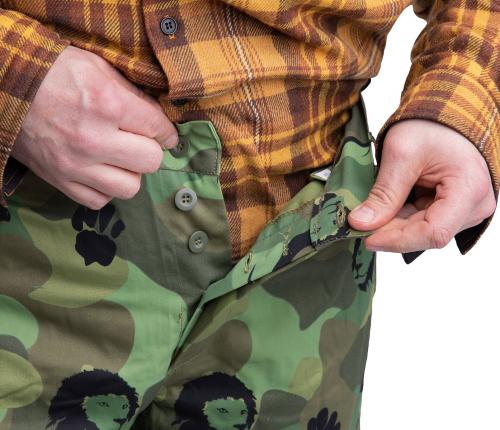 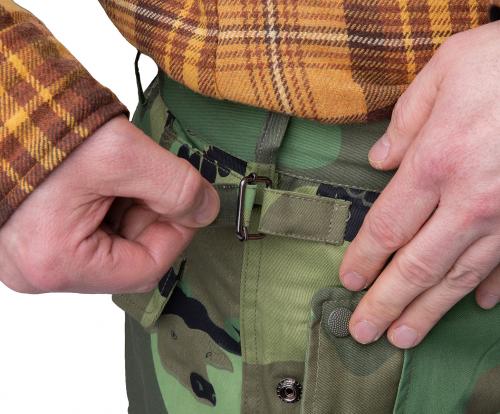 The waist can also be adjusted a bit on the sides. 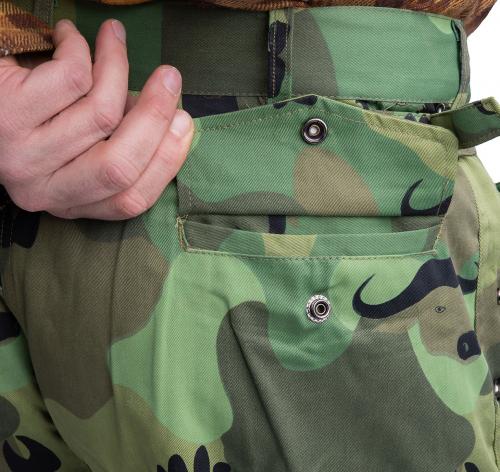 Two back pockets with snap fasteners. 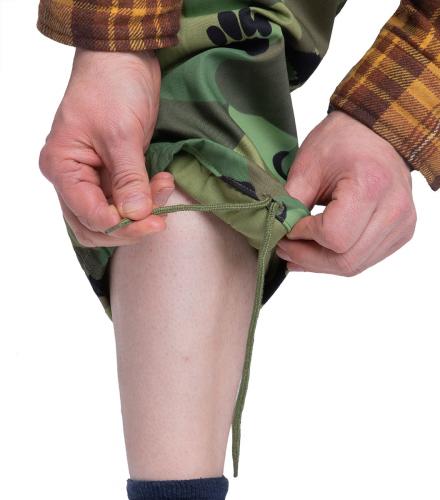 Drawcords at the cuffs 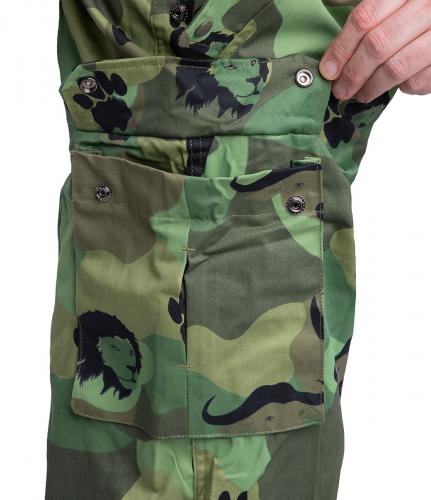 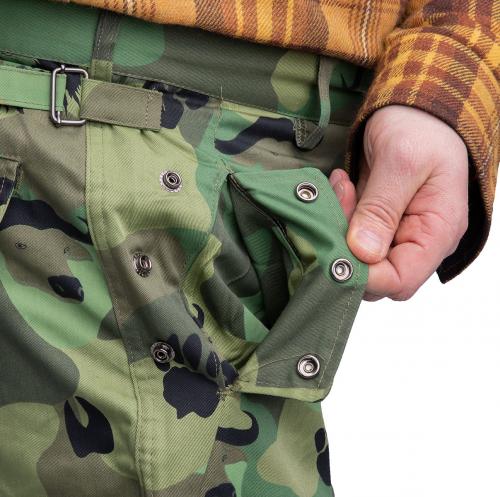 Enough snap fasteners on the side pockets.

Here’s something that you won’t encounter on the streets that often. Cargo pants of the Beninese wildlife park rangers in a rare camo pattern featuring African wildlife. A small batch. If you want durable and really distinctive pants, act now. Forget the outdated leopard patterns and wear lion and buffalo! 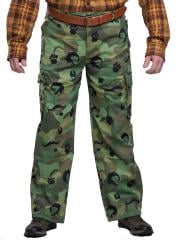 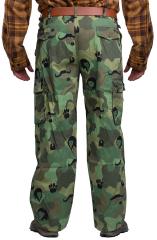 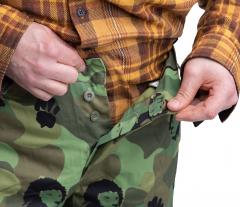 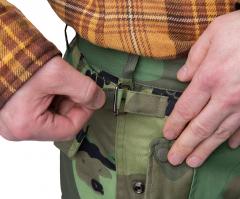 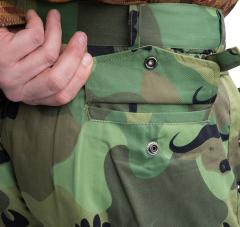 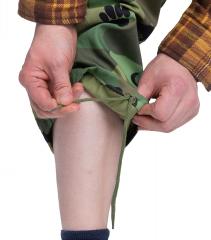 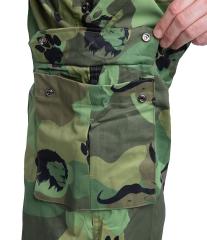 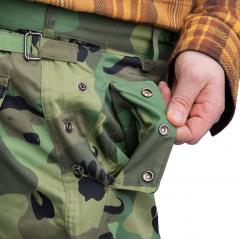 Here’s something that you won’t encounter on the streets that often. Cargo pants of the Beninese wildlife park rangers in a rare camo pattern featuring African wildlife. A small batch. If you want durable and really distinctive pants, act now. Forget the outdated leopard patterns and wear lion and buffalo!

These pants are part of the uniform of the wildlife park rangers that operate under the Ministry of Environment and Natural Resource Protection in Benin, located in Western Africa. The uniform also has a BDU jacket and a cap that are sold separately. This camo pattern is specifically designed for this unit. It utilizes paw and hoof prints as well as lion and cape buffalo heads in addition to abstract patterns. The unit primarily operates in the Pendjari National Park located in northwestern Benin.

The illegal killing of wild animals in Africa is very often part of international organized crime operations and there’s a lot of money involved. For this reason, national parks employ park rangers that conduct anti-poaching operations, chasing professional poachers that are after ivory and ingredients for fucked up eastern wee-wee meds. It is a very challenging and dangerous job because the criminals often shoot first rather than surrender.

This is a bit dashing camo pattern for the northern coniferous forests but if you don’t need to hide from your enemies, these work as outdoor pants. The camo pattern is quite spectacular so with a nice jacket they make a fantastic casual outfit in the urban environment as well.

These pants don’t have any material info but they are most likely some sort of polycotton, possibly something else as well. There isn’t any lining, which isn’t surprising because Benin has a tropical climate. However, the fabric is fairly thick so these also work outside the summer season as well, especially with a warm mid-layer.

We tested these pants with Merino wool long johns on a longer dog walk in sub-zero weather. It was surprisingly pleasant when walking at a brisk pace. It isn’t a total windstopper though, so not ideal winter pants when sitting still.

They have a button fly and drawcord adjustment at the cuffs. The pant legs are quite wide, so a functional adjustment would be nice for those who like slimmer legs. However, these aren’t that functional. If you replace the original cord with a bit more slippery one, it should work quite a bit better. These come with belt loops but the waist can also be adjusted a bit on the sides, so you don’t necessarily need a belt. Unlike many military pants, these have a rather low waist.

Our customers often ask for “adult sizes” because the military surplus we get tends to be somewhat small in size. This time you’re in luck because we only got bit bigger pants. According to the supplier, it is because these folks like good eating. We don’t know whether they were pulling our leg or not. However, especially the pants have quite a bit of space around the waist.

The size is technically the circumference of the waist in centimeters. However, we noticed that they aren’t quite right. The size 104 and 112 pants are actually a bit smaller around the waist. In the table below you can see the actual waist and leg sizes. Small half a centimerer (1/4") differences can also be found within one size.

These pants are unissued so they are intact and quite clean. They are wrinkled and might have some warehouse dust due to long storage but that is easy to remedy. When looking at the condition, rarity, and cheap price, this is a true bargain.