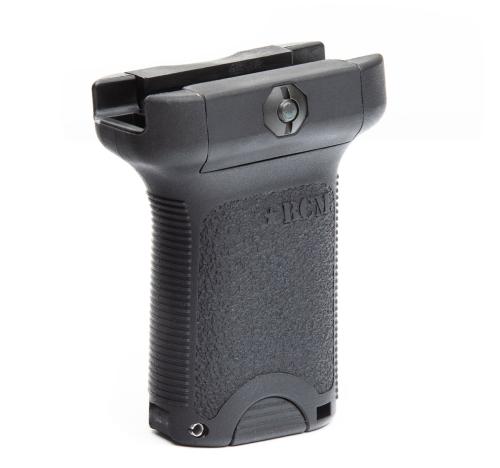 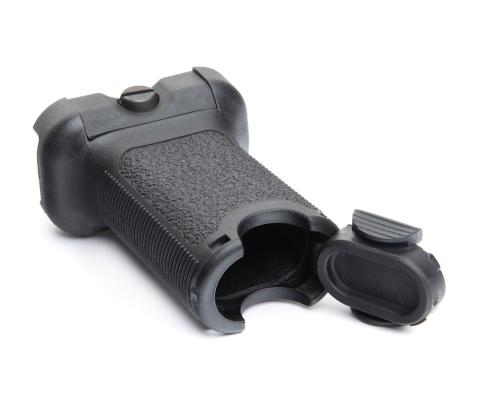 The storage space is rather small and the lid is tight AF.
BCM

The BCM Vertical Grip Short is a stubby grip with a storage space for those who aren't into funny angles or hand stops. While it's enhanced in many ways, this is appealing for those who are looking for just a vertical grip. Picatinny mount. 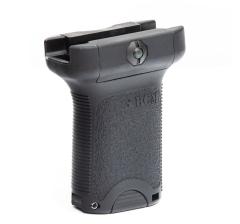 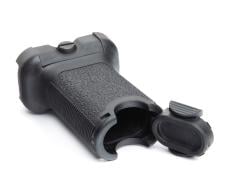 The BCM Vertical Grip Short is a stubby grip with a storage space for those who aren't into funny angles or hand stops. While it's enhanced in many ways, this is appealing for those who are looking for just a vertical grip. Picatinny mount.

The slight forward angle increases the rigidity of the forearm while providing a more natural wrist angle. It can be mounted in reverse angle to increase control when grabbing handguard and grip and the flat sides with aggressive texture give better yaw control to the shooter during firing and non-firing manipulations.

Ordinary Picatinny mount that allows rocking the grip into place, no need to slide from either end.

The storage space is rather small and has a tight lid but it's good for something small: a single CR123 drops right in but you might want to put some foam or other filler in there for two reasons, obviously to eliminate rattling but also because the space tapers and the battery gets stuck easily. Two AA batteries don't quite fit but it's so close that a stubborn person would call it a fit. With just a touch of material removed and the plus sides down, it can be done.

If the storage space is not necessary, the BCM MOD 3 is practically the same grip without the storage and with a lower price tag.

BCM is an American manufacturer of gun parts, accessories, and all the related things you can extrapolate and imagine from these. It's a brand of Bravo Company, a veteran-owned business started in 2003. This brand represents durable quality for a price that is not prohibitive.

Interestingly, Bravo Company offers nothing that says "restricted to law-enforcement / government use only". Their policy is that law enforcement officials and departments are restricted to the same type of products available to civilians of that same city or state. If the civvies can't get it, they won't sell it to the police, either.